WHO Appears to Begin Preparations for Nuclear War

Ted Cruz Thinks He Might Know Where More Biden Classified Docs Are, Calls on DOJ to Search New Location

Congress To Biden Administration: You Have Responsibility To Prosecute Abortionists
Conservative Firing Line

If Chicago Mayor Lori Lightfoot didn’t exist, the television sitcom “Parks and Rec” would have had to invent her.

I mean, just think about it. In one episode, “Parks and Rec”-universe Lightfoot — mayor of a town that neighbors Pawnee, Indiana, no doubt — has an idea to get people to take the census. It’s a horseback-riding activist called the “Census Cowboy,” who rides a horse and tries to get people to fill out the form. Not only is this patently ridiculous, the “Census Cowboy” is later charged with felony animal cruelty for riding his horse on a highway.

Having not learned her lesson, “Parks and Rec”-universe Lightfoot — now stuck in the midst of the COVID-19 pandemic — comes up with a way to get her citizens vaccinated: She’ll give away money! She announces it via a tweet in which “Get Vax’d” is spelled out in cash on the floor of what appears to be her office. However, she ends up looking like a comic-book villain in the photo, and it’s taken in front of an inexplicably dirty couch.

Unfortunately, this isn’t a fictional mayor but a real one; Lightfoot is at the helm of one of America’s largest and most troubled cities during some of the most turbulent years our republic has endured since the Japanese surrendered aboard the USS Missouri, yet it’s almost as if she’s a sitcom character. (We’ve chronicled plenty of Lightfoot’s unfitness for office here at The Western Journal, and we’ll continue to bring readers the truth about her disastrous leadership. You can help us by subscribing.)

So here’s our sitcom moment: On Thursday, Lightfoot decided to promote a vaccination raffle with a total of $826 on a rug, according to The Daily Wire, spelling out (yes, seriously) “Get Vax’d.”

“The message is clear. Get vaccinated from the comfort of your home and this stack could be yours,” Lightfoot wrote.

This is totally normal and will definitely convince the unvaccinated there’s nothing sinister going on with the inoculation push:

The message is clear. Get vaccinated from the comfort of your home and this stack could be yours 💰💵.

So, before we unravel the panoply of responses noting how eerie and unsettling this tweet was, let’s first note that user Evan V. won the internet on Thursday:

And while the Riddler photoshop job may have been the best of these responses, Evan V. was far from the only one who noted this looked like something out of the Batman universe:

She looks like a Batman villain with that money and pose. https://t.co/23jXTaTQ80

this is on brand for Chiraq.

a city run by gangsters, for gangsters.

And it’s not just the money. Check out the minatory gaze:

Honest to god question what the hell is that!!!??? pic.twitter.com/1P0nOdQvAE

The Batman villain vibe isn’t the only preternaturally off thing about this tweet. We’ve had to clean up Twitterer Eric Lawrence’s take a bit, but it’s worth looking at, too: 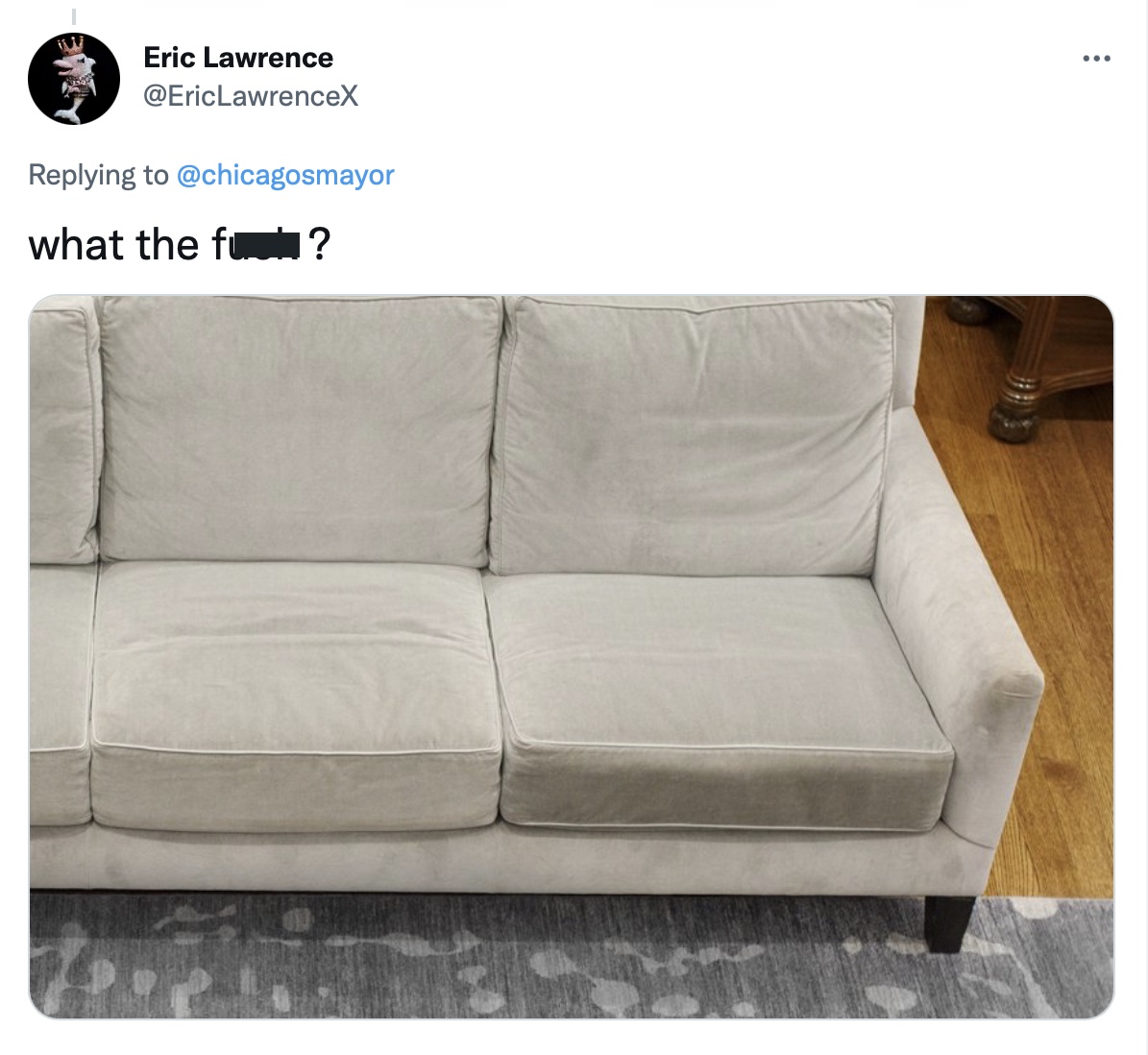 Our family has a) a white couch and b) a white rescue dog named Snowy. I named Snowy after the resourceful, intelligent, energetic sidekick of Belgian cartoon character Tintin. Our Snowy, bless her dear heart, is so dumb that she knows how to get up on the couch but not how to get off it, and so lazy she doesn’t care most of the time. Being a rescue, she’s also marginally housebroken — meaning our white couch is no longer quite so snowy in hue.

After seven years of abuse at Snowy’s hands, however, the couch is still nowhere as dingy and squalid as this — so what the heck are you doing to this couch, Mayor Lightfoot? And what on Earth possessed you to take a picture in front of it instead of, I don’t know, literally any other piece of office furniture in City Hall? Has Chicago sunk this low?

Again — in a vacuum this is weird, but in Lightfoot’s universe this is another not-infrequent self-own.

For example, in July of 2020, Chicago was faced with low census response in parts of the city. Lightfoot had a plan to deal with it. It wasn’t a good one.

“When I was a kid, I loved the ‘Batman’ TV show,” Lightfoot told a group of reporters — perhaps presaging Thursday’s tweet. “And when the city of Gotham had a real difficult challenge, one of the things that the mayor there did is he called out and he sent out the distress signal to Batman.”

But she couldn’t call on Batman, so we got this instead:

Yes, she called out the “Census Cowboy,” with the mayor donning a green cowboy hat as our hero rode out upon his steed to the tune of Lil Nas X’s “Old Town Road.” I reiterate: We are not watching “Parks and Rec.”

What’s more, the “Census Cowboy” turned out to be less Batman and more batty.

Is that @chicagosmayor US Census ambassador The Dread Head Cowboy? https://t.co/2wm2J2CoLf

According to WTTW-TV, our masked hero — secret identity Adam Hollingsworth — was charged with felony animal cruelty for the ride on Chicago’s Dan Ryan Expressway, which was apparently designed to spotlight violence against children … somehow.

Hollingsworth was sentence to 90 days in jail last November, the Chicago Sun-Times reported, after a trial in which a judge told the frequently disruptive Hollingsworth he had “made a mockery of these proceedings.”

The Sun-Times’ report didn’t mention whether the “Census Cowboy” had been slapped with a fine. However, if it’s less than $826 and Hollingsworth hasn’t gotten vaccinated against COVID yet, I’ve got some good news for him.

The state of Louisiana has found itself in hot water with the U.S. Justice Department after it was revealed the state violated federal law.
By John McCann, Western Journal  January 29, 2023 Comment MoreShare

Is Viral Video Exposing Apparent Conspiracy at Pfizer a Trap? Something's Not Right About the Man in the Clip

It's no surprise that it's difficult to separate fact from fiction in this case when that's how everything surrounding COVID-19 has been.
By Christine Favocci, Western Journal  January 29, 2023 Comment MoreShare

It's not just your stove. The Democrats are coming for just about all your kitchen appliances as part of their radical climate change agenda.
By Warner Todd Huston, Western Journal  January 29, 2023 Comment MoreShare

When a sandwich went missing from a Michigan police station, the culprit was quickly identified, but will not face any punishment.
By Jack Davis, Western Journal  January 29, 2023 Comment MoreShare

Democratic Gov. Katie Hobbs of Arizona, freshly inaugurated after what we are assured was a completely flawless and totally legitimate November election, appears to be far more interested in virtue […]

"I’ve got one leg, I’ve got no feet, I see through one eye, got one workable hand, I was burned all over -- and I feel stronger."
By Lorri Wickenhauser, Western Journal  January 28, 2023 Comment MoreShare

After years of debate, the bishops of the Church of England won't support same-sex "marriages."
By Jack Gist, Western Journal  January 28, 2023 Comment MoreShare

Leftists Melt Down After Their Beloved ACLU Defends Trump: "Have You Been Hacked?'

The ACLU has outraged the political left by agreeing with Meta's decison to let former President Donald Trump back on Facebook.
By Jack Davis, Western Journal  January 28, 2023 Comment MoreShare
Next