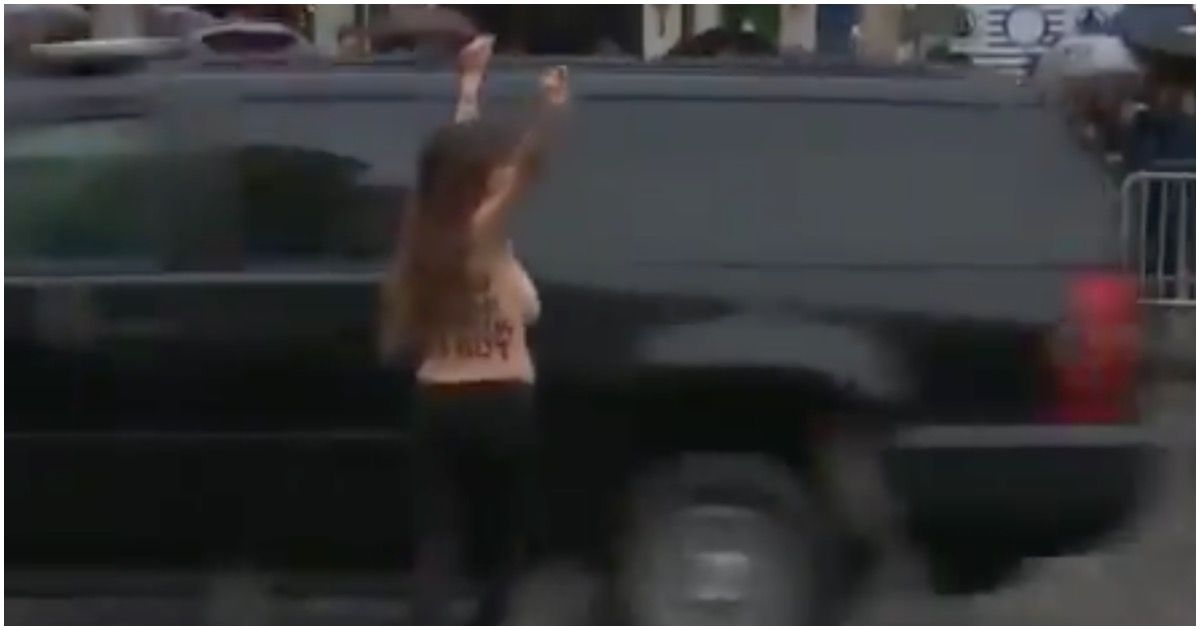 While President Trump was in France, a topless female protester managed to come right next to his passing motorcade.

Imagine if this was an ISIS suicide bomber.

It is evident the French don’t have the tightest security when the most powerful man in the world is in town.

Yahoo reports the woman, a member of the radical feminist activist group Femen, shouted Trump is a “fake peace maker.”

French President Emmanuel Macron criticized “nationalism” in his speech, a move the mainstream media is portray as a swipe at Trump.

“Patriotism is the exact opposite of nationalism. Nationalism is a betrayal of patriotism. In saying ‘Our interests first, whatever happens to the others,’ you erase the most precious thing a nation can have, that which makes it live, that which causes it to be great and that which is most important: Its moral values,” Macron said.

Trump arrived in France on Friday to commemorate Armistice Day and the end of World War I.

Moments after Air Force One touched down, Trump sent out a tweet blasting French President Emmanuel Macron for wanting to create a “European army” to guard against the U.S. and other nations.

Here’s what Trump is referring to regarding Macron:

French President Emmanuel Macron is calling for the formation of a “real European army” to protect the continent “with respect to China, Russia and even the United States of America.”

Agence France-Presse reports that while on a tour of World War I memorials Tuesday, Macron said: “We will not protect the Europeans unless we decide to have a true European army.”

Macron: “We have to protect ourselves with respect to China, Russia and even the United States of America.”

Macron: “Who is the main victim? Europe and its security. I want to build a real security dialogue with Russia, which is a country I respect, a European country — but we must have a Europe that can defend itself on its own without relying only on the United States.“