Democratic Tennessee Rep. Steve Cohen made a call this week for the military to join forces with the “Resistance” in opposing President Trump after his recent press conference with Russian President Vladimir Putin.

Yes, this man is essentially suggesting the military launch some sort of coup against the president, the commander-in-chief, which, for those a bit slow on the draw, means he is openly advocating treason. Not a very wise fellow, right?

“Where are our military folks? The Commander in Chief is in the hands of our enemy!” Cohen wrote on Twitter, using language suggestive of a military coup. 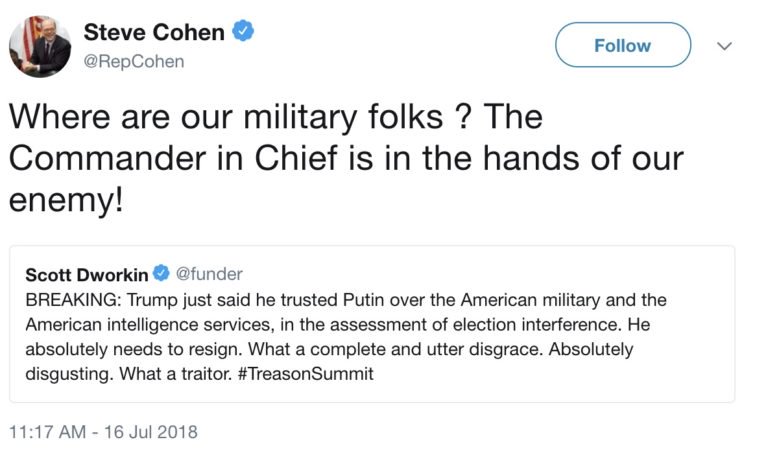 Cohen later said that he was in no way calling for a coup. “No coup called for,” he wrote, claiming it unlikely that someone would call for a coup on Twitter.

Cohen’s bizarre tweet was similar to one from former Obama CIA Director John Brennan, who claimed on Monday that Trump’s press conference was “treasonous.”

Trump claimed on Monday that he confronted Putin about Russian election meddling but later sounded skeptical about the U.S. Intelligence Community’s conclusion that Russia was meddling in American politics during the 2016 presidential campaign.

This is the kind of nutty political rhetoric from the left that absolutely needs to stop. There’s no reason to call for military intervention against the president for doing something politically that one disagrees with. That’s pure insanity.

A lot of folks, liberals and conservatives, have taken issue with Trump’s interaction with Putin this week, but you don’t see folks calling for all sorts of crazy actions to be taken against him for it.

The left uses melodrama all of the time to exercise their fanatical hatred for all things Trump. Contrary to what these people think, it’s absolutely possible to have a civilized conversation on important matters without getting hysterical.