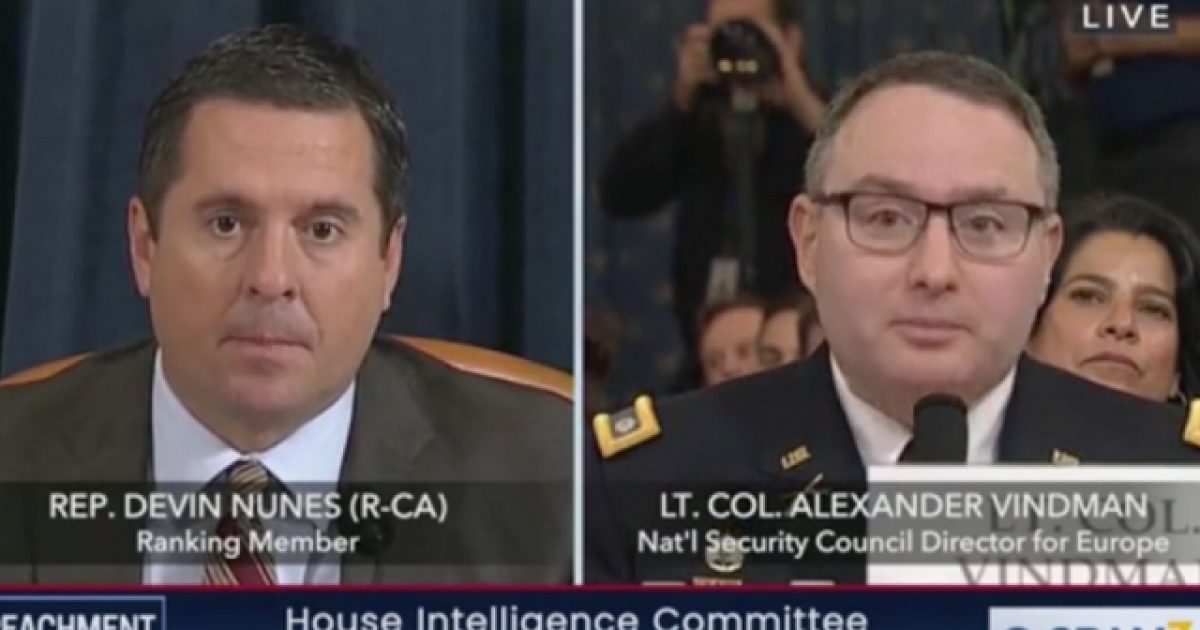 Lt. Col. Alex Vindman, a key witness in the impeachment trial against President Trump, just received some bad news for his role in the attempted coup by Democratic officials working within the government to remove the president from office.

Vindman will be removed from the National Security Council as early as Friday according to new reports.

Lt. Col. Alexander Vindman, a Ukraine expert who leads European affairs at the NSC, is expected to be rotated out of his current post as early as Friday.

Vindman’s report to the White House counsel of Trump’s phone call with Ukrainian President Volodymyr Zelensky, during which the president pressed for an investigation into former Vice President Joe Biden and his son Hunter Biden, is one of two accounts that led to the president’s impeachment in the House. The second alarm was raised by a whistleblower, believed to be Eric Ciaramella, a CIA analyst who oversaw the NSC’s Ukraine portfolio under President Barack Obama and briefly under Trump. A partial transcript of the phone call was later shared by the White House.

Testifying in November, Vindman said the president used “inappropriate” pressure on Zelensky. The move to oust Vindman is said to have been under consideration since “at least last week,” Bloomberg reports.

The next position that Vindman is likely to hold will be at the Pentagon where he will sit under Defense Secretary Mark Esper, who stated last summer that Vindman wouldn’t be facing any sort of punishment for his actions.

Despite playing such a significant role in the impeachment trial, Vindman is lucky to be getting off with only a slap on the wrist, so this is an opportunity he better not squander. Another one may not come along the next time.

Trump Says Congress Should Expunge Impeachment From His Record

Watch: Nancy Pelosi Accuses Trump of Being ‘Sedated’ During State of the Union Speech