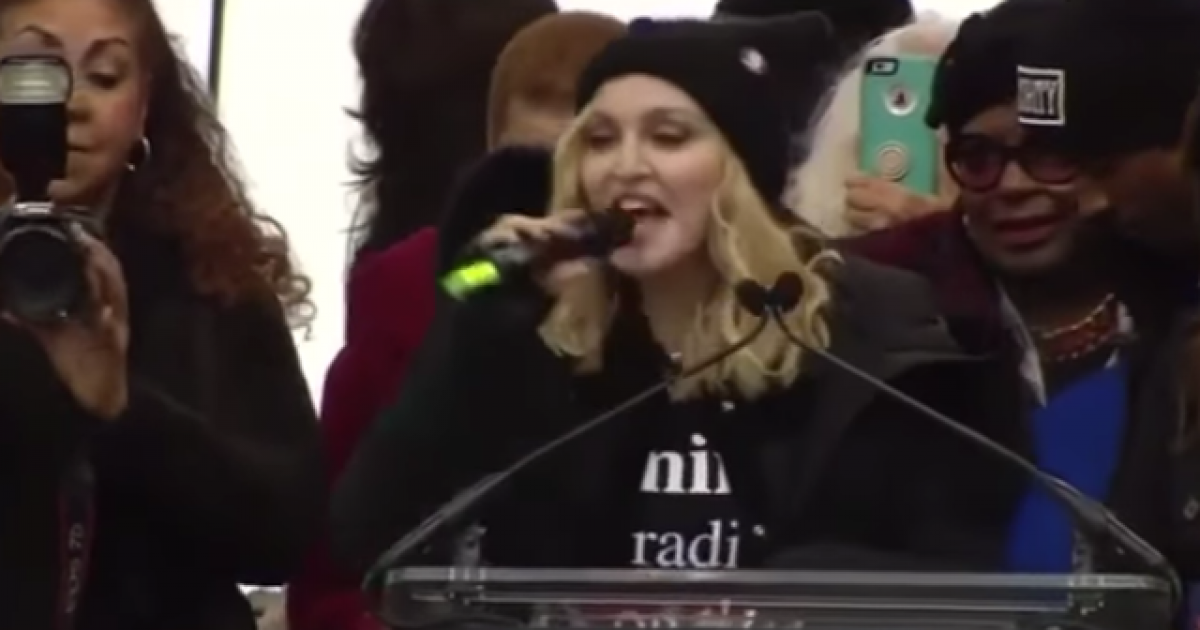 In case you’re unfamiliar with the pop music icon, Madonna, the one fact you need to know about her is that she clearly and whole heartedly believes that everything revolves around her. All things are about Madonna.

The singer/actress put this sickening self-absorption on full display during the MTV Video Music Awards, where she was supposed to give a tribute to the late great Queen of Soul, Aretha Franklin. Instead, somehow, Madonna turned what should’ve been a beautiful moment honoring a legend to being all about herself. Shameful.

Madonna’s “tribute” started out appropriately enough (albeit with a lot of Madonna in it). “Aretha Louise Franklin changed the course of my life,” she said. “I left Detroit when I was 18. $35 in my pocket. My dream was to make it as a professional dancer.”

OK, both Madonna and Franklin were from Detroit. Worth a mention. But then she went on — and on and on and . . .

“After years of struggling and being broke, I decided to go to auditions for musical theater. I heard the pay was better. I had no training or dreams of ever becoming a singer, but I went for it. I got cut, and rejected from every audition,” Madonna continued. “Then, one day, a French disco sensation was looking for backup singers and dancers for his world tour. I thought, ‘Why not?’ The worst that can happen is I could go back to getting robbed, held at gunpoint and being mistaken for a prostitute in my third-floor walk-up that was also a crack house.”

Notice how there’s not been a single mention yet of how in the world Aretha Franklin changed her life? She mentioned her name briefly then launched into a lengthy bio of herself.

It only gets worse. Here’s the rest of her little spiel.

Two large French record producers sat in the empty theater, daring me to be amazing. The dance audition went well. …

They asked if I had sheet music and a song prepared. I panicked. I overlooked this important part of the process. I had to think fast. My next meal was on the line. Fortunately, one of my favorite albums was Lady Soul by Aretha Franklin. I blurted out. “You make me feel… you make me feel like an actual woman.” Two French guys shouted at me. “You know, by Aretha Franklin.” They looked over at the pianist. [I said] “I don’t need sheet music, I know every word. I know the song. …

“I will sing it a cappella.” I could see they didn’t take me seriously. Why should they? Some skinny-a** white girl is going to come up here and belt out a song from one of the greatest soul singers ever, a cappella? I said, “B**ch, I’m Madonna.” No, I didn’t. Just kidding. I wasn’t “Madonna” yet. I don’t know who I was. I don’t know what came over me. I walked over and started. When I was finished, I was drenched in nerve sweat. You know what that nerve sweat? …

‘They said, “We will call you one day, maybe soon.” Weeks went by. No phone call. Finally, the phone rang. It was one of the producers: “We don’t think you are right for this job.” “Why are you calling me?” He replied, “We think you have great potential. You are rough around the edges. We want to bring you to Paris and make you a star. …

“We will put you in a studio, with the great Giorgio Moroder.” I had no idea who that was, but I wanted to live in Paris and I wanted to eat some food. So, that was the beginning of my journey as a singer. I left for Paris, but I came back a few months because I had not earned the life I was living. It felt wrong. They were good people. I wanted to write my own songs and be a musician, not a puppet. I needed to go home and learn guitar. That is what I did. And the rest is history. …

“So, you are probably all wondering why I am telling you this story. There is a reason, because none of this would have happened, could have happened, without our lady of soul. She led me to where I am today. And I know she influenced so many people in this house tonight. In this room tonight. And I want to thank you, Aretha, for empowering all of us. R-E-S-P-E-C-T. Long live the queen.”

Oh look. Aretha finally manages to squeeze out a mention at the end of the story in the most superficial way possible. Oh, yeah, look. There’s another mention a little ways up, but again, it’s not about how great Franklin’s music is, but about how singing it helped launch her career.

Here’s what the Internet had to say:

Madonna’s tribute to Aretha Franklin is Madonna telling a story about herself while acknowledging she loved the “Lady Soul” album. #VMAs

Who in their right mind thought it was a good idea for Madonna of ALL people to do the Aretha Franklin Tribute ?

Perhaps it’s time to find someone who actually cares about others more than themselves to give tributes to legends who shake off this mortal coil? Just a thought.

VIDEO: Millennials Agree With Gov. Cuomo That America ‘Was Never That Great.’ Fail Spectacularly When Asked to Explain