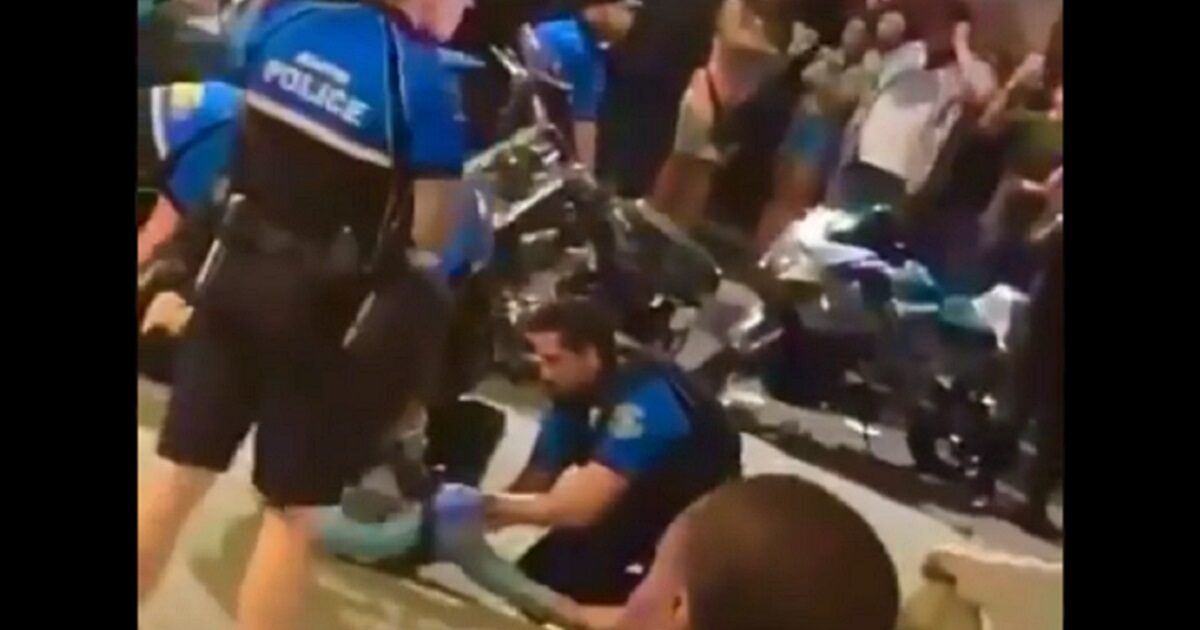 When is the police description of a mass shooting suspect not pertinent to a newspaper’s story? When it could “perpetuate stereotypes,” apparently.

Officers were on the block and reached the scene almost immediately.

“They were there within seconds,” Chacon said. “And quickly identified several shooting victims that were in distress. They began immediate life-saving measures.”

NEW: This is video of the aftermath of the downtown Austin shooting showing officers performing first aid on the wounded.

That meant, thankfully, none of the 14 who were hit have died as of Sunday morning, when police had one of two suspects in custody. The shooting was apparently between two parties and not part of a random attack.

In its writeup of the shooting, the Austin American-Statesman said the incident “intensified questions about public safety and gun violence in one of the nation’s fastest-growing cities.”

“The shooting marked the most significant mass casualty incident emergency officials have responded to citywide since 2014 — an incident that also happened in the same area when a man plowed his car into a crowded, barricaded street during SXSW,” the American-Statesman reported, referring to the South by Southwest film and music festival. “Four people died and 30 were injured.

“Although no one died as the result of Saturday’s shooting, the incident also marked the first time that many people were shot since the infamous mass shooting from the University of Texas Tower in 1966 that left 15 dead.”

If the American-Statesman is putting the incident in the same league as the 1966 killings at the University of Texas, then, one assumes the outlet is taking the mass shooting quite seriously. Why, then, would it not report on the Austin Police Department’s description of one of the suspects?

“Police have only released a vague description of the suspected shooter as of Saturday morning,” an editor’s note at the end of the story read. “The Austin American-Statesman is not including the description as it is too vague at this time to be useful in identifying the shooter and such publication could be harmful in perpetuating stereotypes. If more detailed information is released, we will update our reporting.”

In a Saturday-morning Twitter post, the paper echoed the statement, adding that it could “put innocent individuals at risk.”

As part of our public safety reporting policy @statesman does not publish vague descriptions of possible suspects.

At this time, information provided by police of a possible shooter falls into this category and could perpetuate stereotypes and put innocent individuals at risk.

Whether or not you thought the Austin Police Department’s description of the suspect too was vague, it contained pertinent information: “There is one suspect described as a black male, with dread locks, wearing a black shirt and a skinny build,” the department said in a media release.

When, then, does a publication decide information about what sort of description of a suspect in a mass shooting event is too vague? In this case, you could be forgiven if you thought the operative part of the American-Statesman’s statement was that it “could perpetuate stereotypes,” given that the suspect was black. Some on social media certainly thought it smacked of wokeness:

Liberal newspaper Austin @statesman says it refuses to print the description of the mass shooting suspect for ideological reasons. The at-large suspect is described by police as a slim black male with dreadlocks who wore a black shirt. pic.twitter.com/7Ec3GSdQCP

Stop telling me to support local newspapers when this is the kind of ridiculous coverage they provide https://t.co/dK9r069B1z pic.twitter.com/Cyg3DAiPgz

@statesman: “vague description”, “too vague at this time to be useful”

In a statement, the Austin Police Department described the suspect as “a black male, with dread locks, wearing a black shirt and a skinny build.” https://t.co/3C8lvX6d3Z

Police described the Austin gunman as “a black male wearing a black shirt with a skinny build and with dreadlocks – dreadlock-type hair.”

The Statesman-American said it would not publish the “vague” description because it “could be harmful in perpetuating stereotypes.”

Furthermore, if this is Austin American-Statesman policy, one could argue it was reached recently. As a Twitter user pointed out, after serial bombings in 2018, the newspaper was willing to print a vague description about mail bombers that leaned entirely on stereotypes in a case with no suspects:

Meanwhile, here’s the Austin American-Statesman in 2018, when there was an outstanding bombing suspect in Austin. Back then, the paper’s stance was: we have no description of this bomber, but our stereotype is that bombers tend to be white males! https://t.co/W7d6hBY6PW https://t.co/HR31EfnCuL pic.twitter.com/NLnOuEDZmG

“Still, researchers have identified some broad characteristics that police turn to in trying to identify deadly bombers,” the story read. “All have been white men. While they have varied educational attainment, they were of above-average intelligence and mechanically inclined.

“Almost always, they were furious.”

For the record, the bomber did turn out to be a white man, Mark Conditt. In the wake of his death after killing himself with his own bomb, the American-Statesman published a story in which the newspaper tried to decode Conditt’s motives — which could have included coming from a “staunchly religious” upbringing but “questioning his sexuality.” Not that journalists would want to “perpetuate stereotypes” about repressed Christians by this kind of speculation.

Wherever the American-Statesman editorially draws the line on when a description is too vague to be passed on — or whether or not the cultural stereotypes it might perpetuate play any part, explicitly or implicitly, in the decision — it raises serious questions about the ethical implications of the policy.

When a mass shooter is on the loose, what certainty do you have that not reporting the information wouldn’t “put innocent individuals at risk?” What if the information were of use? Does it engender trust with readers and the public if you’re explicitly telling them information is being kept from them because they can’t be trusted not to “perpetuate stereotypes,” particularly when the subject is a minority?

Even if the newspaper decided not to report the description because of its editorial policies — a mistake, especially given the gravity of the situation — the conspicuous act of letting everyone know why the information was being withheld was profoundly counterproductive. In an act of virtue-signaling, the Statesman told its readers all it needed to know about the kind of objectivity they can expect from their capital city’s newspaper.

Reported Footage from 2017 Proves That Bats Were Kept in Wuhan Lab, Came Into Close Contact with Scientists

Leftist Candidate Stormed a School Bus, Terrorized Kids by Saying She Could Have a Bomb, Ranted About Somalia