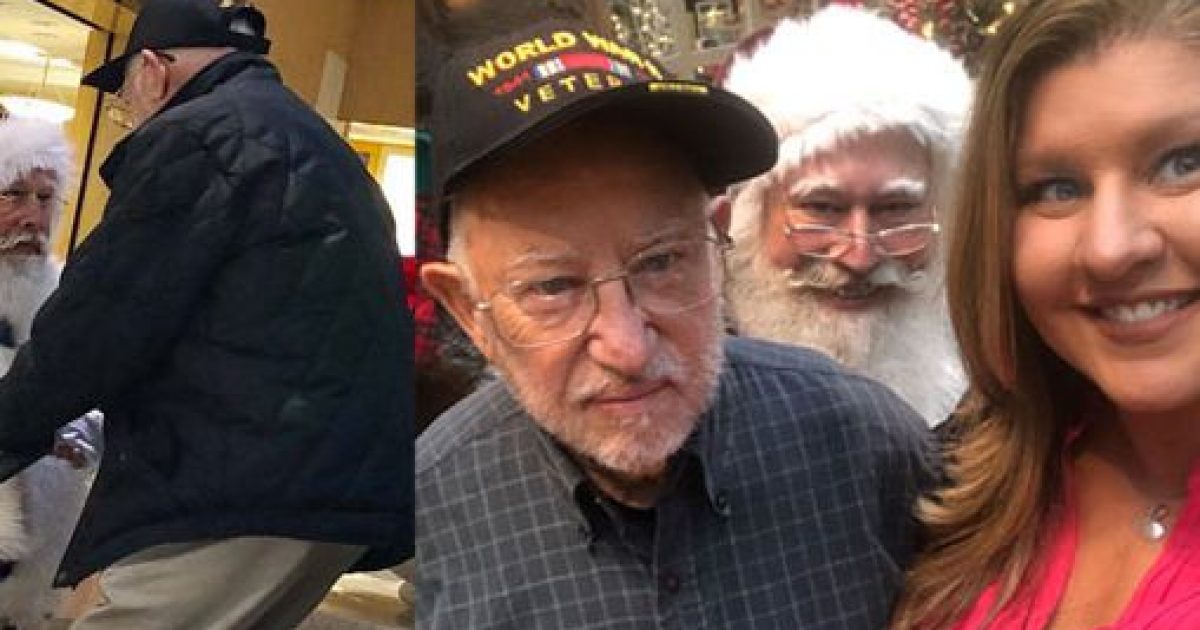 As we go about our busy days during the Christmas season, there are thousands of sweet or life-changing moments we miss when we don’t stop to notice the little things. Facebook user Gina Stecher Wilbur experienced this firsthand when she noticed something unusual about the Santa actor at her local mall.

Wilbur shared in a now-viral Facebook post that while she was at the Concord Mall in Wilmington, Delaware, she stopped for a rest on a bench near a Santa’s Workshop attraction, she enjoyed a brief moment of people-watching.

What she saw next was an extraordinarily simple yet heartwarming incident.

“…Took a second to sit on a bench near Santa’s workshop… then Santa steps away from his Chair,” Wilbur explained in her post. “He walks over to a veteran sitting on the wall…”

“As Santa approaches, the veteran stands and Santa takes a knee,” she continued. “I hear Santa telling the gentleman, in a soft voice, of others he knew who served. He shakes his hand with genuine gratefulness thanking him for his service and returns to the children.”

Wilbur described the touching display of honor and respect the “best moment of [her] day.”

Wilbur noted in a statement to FOX29 that she wasn’t the only one who had noticed the Santa’s kind heart. “Others were commenting of heartwarming stories about Santa and how he impacted them; always greeting and respecting veterans, signing to deaf children and holding the sleeping babies.”

“I even received a Facebook message from Mrs. Claus boasting about her kind, endearing husband we all call Santa,” she added. “If you are looking for the real Santa, I know him!”

Not long after her post went viral, the veteran’s daughter reached out to Wilbur identified him as 93-year-old Bob Smiley, who served under General George S. Patton.

After the moment was shared by millions across the nation, Wilbur, Smiley, and the anonymous Santa met at the mall for a reunion.

What an absolutely unforgettable, incredible day… and it’s only 8am! So much to say but I’m soaking it in.. for now. I am in awe.

“We owe a debt of gratitude to men like this, that have made such a life-changing decision to give up themselves, be willing to lay down their life even, for other people,” Santa told FOX29.

“This picture is no longer just an image but a photograph that came to life,” Wilbur shared with the news outlet. “It goes so much deeper because of those two men.”

“They have led lives that will leave legacies and we are all getting a glimpse of it now. In a world full of so much negativity, I truly think we have to seek the positive,” she commented. “There are genuinely good people all around us, doing great things. It’s all about perspective. We just need to choose to see it and share it.”