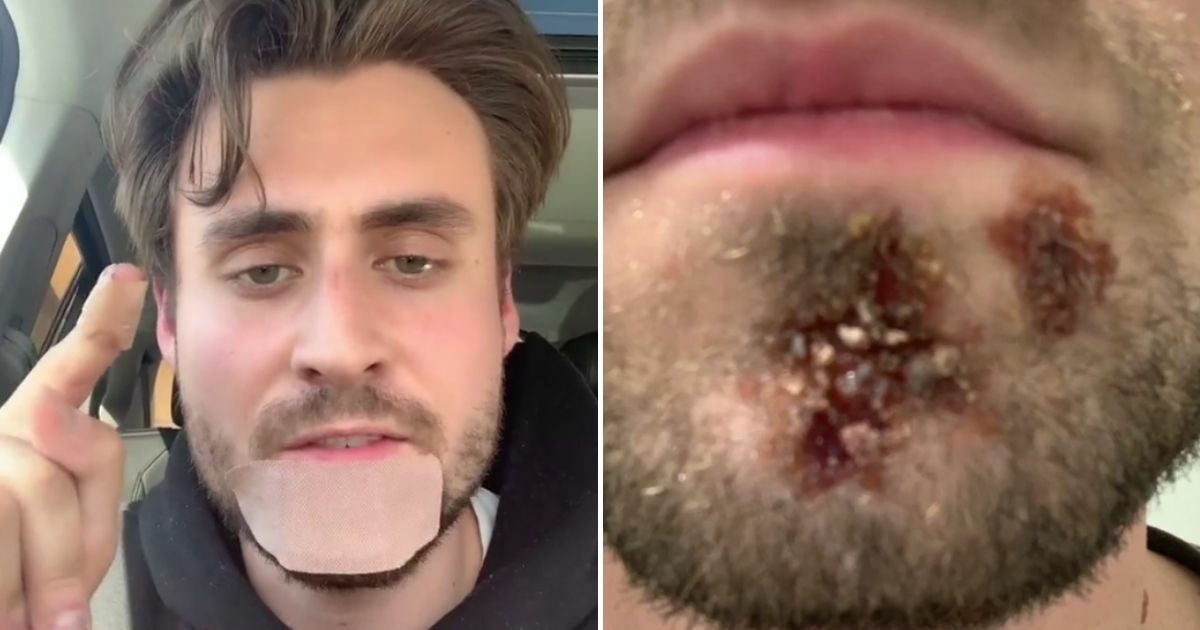 Who knew that one shaving mistake could lead to such a painful and unfortunate set of circumstances?

For this 24-year-old Los Angeles native, however, his dermatological nightmare could not be more real after mistakenly using his roommate’s razor in a bid for a quick shave.

Days after the seemingly normal action, “I got these deep pustules and sores on my chin and along my jawline,” Nick Holterman told U.K.-based news outlet Jam Press, according to the New York Post.

It felt like a “really bad upper respiratory infection,” he said, noting his sore throat and fatigue.

As  “spider bites” surfaced on his face and “ballooned in size,” Holterman ventured to his general physician, who gave him a course of antibiotics.

According to BuzzFeed, over the course of the outbreak, Holterman was given three separate antibiotics. The first — Cephalexin — failed to alleviate the symptoms, instead, aggravating the outbreak more.

“To add insult to injury, my sores ballooned in size and combined to form like a mass of crusty nastiness on my chin,” he said.

“I went to another urgent care and they tested me for COVID-19, strep, mono, etc. They all came back negative, but the doctor correctly guessed that the cause was still bacterial and not viral, and decided to put me on a stronger antibiotic.”

The new antibiotic Holterman received served well for a few days, then his condition took a turn again for the worst.

WARNING: The following video contains vulgar content that some viewers will find offensive.

“I was sprouting new, deeper sores along my jawline,” he told BuzzFeed. “Keep in mind, this entire time they were itchy, like burning-hot red itchiness like I’ve never felt before. That’s not normal for mere ingrown hairs.”

With this new antibiotic, Holterman’s condition eventually got mildly better, clearing the aches, pains and sore throat. But the sores on his face would not falter.

Finally, Holterman skipped the general physician, traveling straight to a family friend who happened to be an ER doctor.

There, the injured shaver would be given a course of Bactrim, which Holterman described, along with Clindamycin and Vancomycin, as “like the king of antibiotics.”

“I felt like I was going to throw up constantly for a week because my body’s natural bacteria and gut flora was being ravaged by three different antibiotics,” he said, according to the New York Post.

“I had to eat a lot of yogurt to regain those probiotics.”

Holterman discovered that he had contracted a bacterial infection, which the doctors identified as impetigo — a condition by which skin infections often manifest, according to BuzzFeed.

While the specific bacterial infection may be unknown to doctors and Holterman, the origin of the condition is most certainly known.

“Just want to remind everyone not to share razors or use random people’s razors. You can get an antibiotic-resistant flesh-eating bacteria that is really painful and oozes pus all the time,” he said in a TikTok video documenting his condition.

In the end, Holterman noted, prudently, “Antibiotics will make you constipated for two weeks, and if they don’t work, you will die.”

It is not a wise-guy move to borrow any sort of sanitary device from another person. While it may be easy and accessible, it is not worth the risk. In the future, hopefully, Holterman will think twice before using a razor, toothbrush or deodorant stick that does not belong to him.