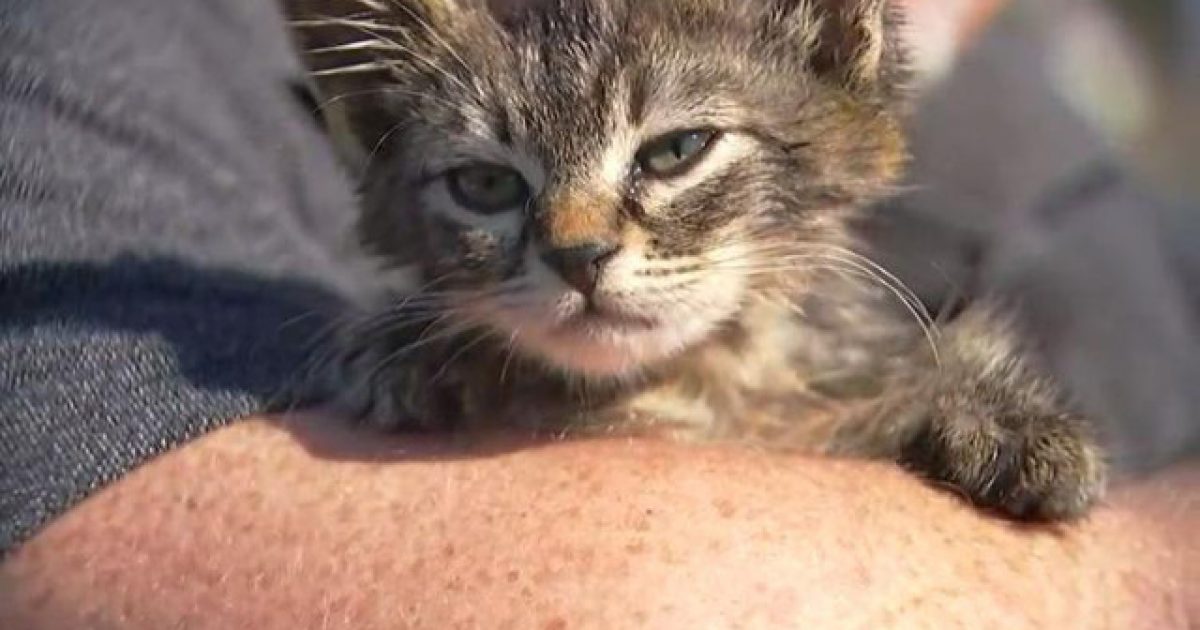 A man from Silverton, Oregon was on his way to work when he says he made a disturbing discovery Friday morning, one that would absolutely shock anyone who is a lover of animals right to the core.

A kitten was apparently glued to the road, smack in the middle of a busy lane of traffic. However, this good Samaritan was not about to sit idly by and do nothing, opting instead to leap into action to try saving the kitten’s life.

This will restore some of your faith in humanity.

It was around 7 a.m. and still fairly dark outside, so at first, Chuck Hawley couldn’t tell what was in the road in front of him on Silverton Road Northeast near Cordon Road Northeast, just outside of Salem.

At first, he thought it was a small box, but as he got closer he realized it was alive – a little kitten, frightened and cold.

“When I went to pick her up, her feet were stuck to the road, and I’m like uh oh. So I start to pull her feet up – and it was like a rubber cement, so she was glued to the road.” Hawley told FOX 12. “It was all under her neck and then she had a little bit down her side, but it was mostly her tail and her feet.”

There’s no way to know how long she’d been there, but Hawley believes it’s no accident.

“We were hoping that she had just walked through glue, but it was pretty apparent that somebody had soaked her feet in glue and sort of rubbed it into the pads of her feet,” he explained.

Based on what he saw, he believes whoever did it intentionally placed her in the middle of the traffic lane.

“I think the way she was sitting someone actually went out and put her there,” he said. “Because there were no glue foot prints around, it was just a glob of glue under her, so it looked like someone just took her and put her in the road.”

He took the 5-week-old kitten to the Silver Creek Animal Clinic, where staff had to use mineral oil to get the glue out. They also found puncture wounds on her neck but aren’t sure what caused them.

Dr. Jenny Bate examined the kitten, telling local media outlets that she’d never encountered something like this before.

“I mean, what can you think when something like that happens? Your first reaction is disgust, and then what could cause a person to do something like that?” Bate said. “Somebody put that glue there, I don’t know how or why, but yeah, I mean, somebody did that.”

A full report is being made with the Marion County Sheriff’s Office in the hopes that a camera might have caught the individuals responsible for this sickening crime so that they can be brought to justice.

The good news is, the kitten is expected to make a full recovery. But that’s not all. She’s also going to be given a permanent home with Hawley.

In a world as divided as ours, a story like is desperately needed!