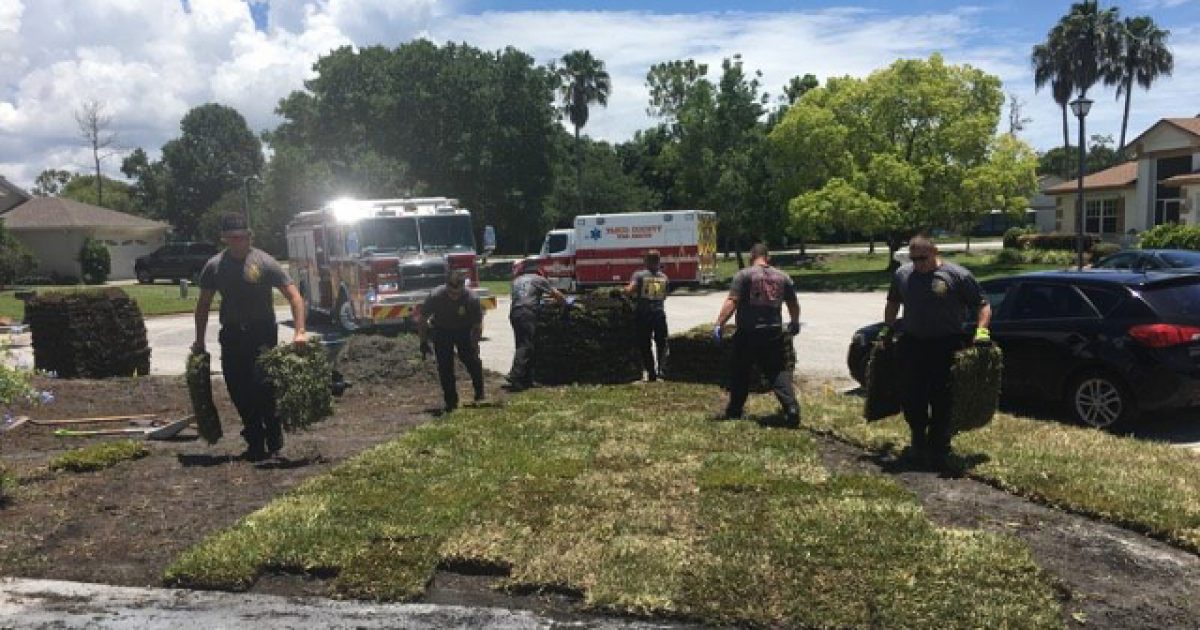 A group of firefighters and paramedics from Pasco County, Florida are making national news after what they did for a man who had a heart attack while laying sod, having many stating they have went “beyond the call of duty.”

Gene Work was putting sod down in the yard of his home in Pasco County over the weekend when he started to experience heart attack symptoms, according to a post his wife Melissa made on Facebook.

The man was attempting to get the job done as quickly as possible because the HOA they belong to had threatened to fine them for not have the sod down by a certain date that was rapidly approaching.

As Work faded in and out of consciousness, he was begging his wife to figure out a way to lay down the sod, “because he didn’t want it to go to waste and die,” she said.

Work was rushed to the hospital with his wife by his side while his brother-in-law, who witnessed the heart attack, stayed behind to finish the project.

As his brother-in-law was laying down the sod, he heard the distant rumble of huge trucks on the road.

“He turned around and saw the fire truck and ambulance had come back. He was confused and thought they were coming to check on him,” Melissa said.

Before he knew it, seven firefighters and paramedics jumped out of the vehicle, rolled up their sleeves and got to work.

“They came back!!! They saved his life, dropped him off and then cared enough to save our GRASS!! They didn’t know that my husband pawned his favorite gun to pay for the sod that he thought was going to die. They didn’t know all we have been through as a little family,” Melissa wrote, adding that she was also about to fight for her life for a bone marrow transplant next month.

This, ladies and gentlemen, is what real life heroes look like. Not only did they save his life, they helped him avoid massive fines from an overbearing HOA. If that doesn’t make these fellows the real MVPs, what would?

There’s still good in this world and it’s important that we share stories like this around to remind folks of our shared humanity which transcends our political ideologies and parties.

Man Refuses to Drive Woman Home, What She Does Next Almost Destroys His Life

Three-Year-Old Abandoned by Child Traffickers in Rio Grande. Check Out Who Rescued Her