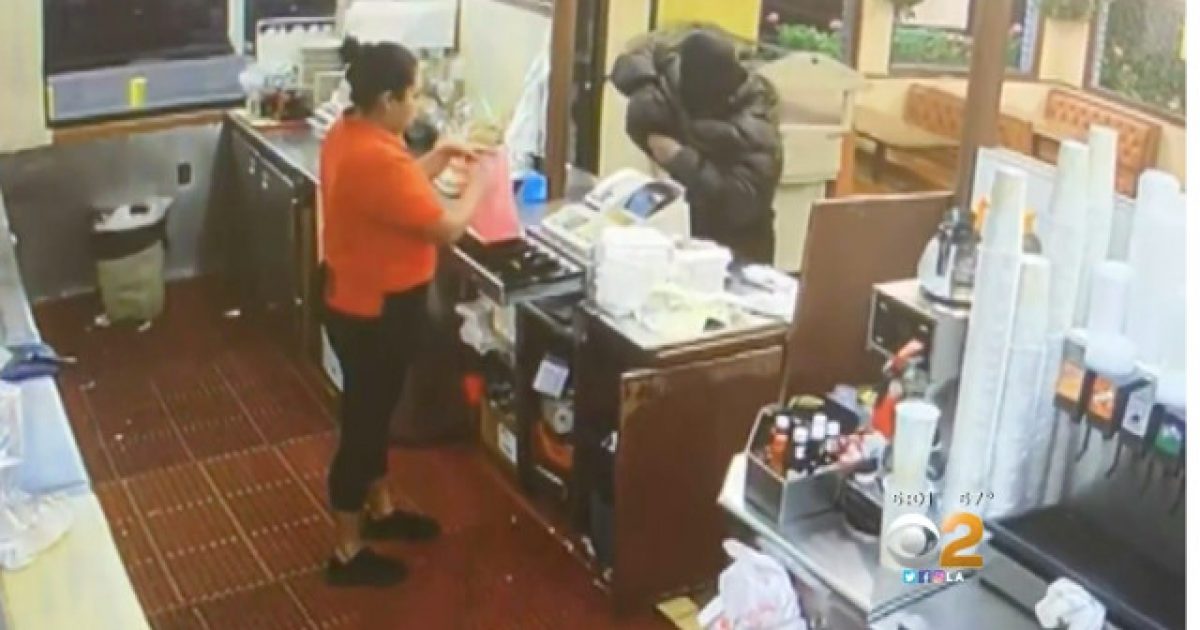 A drive-thru customer at a restaurant gave a would-be robber the surprise of a lifetime by offloading two bullets into the man while he attempted to rob the restaurant, a decision he likely regretted fiercely later on.

Apparently the folks in the drive-thru offloaded two rounds into the bad guy before speeding off into the night, leaving police wondering if the two incidents were somehow related.

CBS2’s Laurie Perez spoke to a witness and sorts out the bizarre story.

The Cozy Corner’s security cameras were rolling at 12:43 Saturday morning when police say a masked man entered the restaurant with a black revolver and demanded money.

He threw a bag at one of the workers and demanded she fill it with cash. Her hands shaking, she filled the bag. As he grabbed the bag, shots rang out.

At least one shot hits the drink machine. Next you see the man turns and he is wounded and falls to the floor.

The car then took off into the night while the robber fled across the street where he was later picked up by police. He is said to be in stable condition.

Unfortunately, we live in a day and age where if the guy in the car gets discovered, he’ll llikely face more prison time than the actual robber, which is a sad commentary on the current state of affairs in this country.

It’s strange that the guy sped off, but there could’ve been any number of reasons behind such a move, such as the fear of getting into trouble for having and discharging a firearm in the city.

Let’s hope this is one bad guy who learns his lesson and doesn’t put himself and others back in the line of duty over a quick and easy score of cash. It would be tragic to lose one’s life over something stupid.

This Video Game Company Just Made the Sickest, Most Disturbing Game Ever