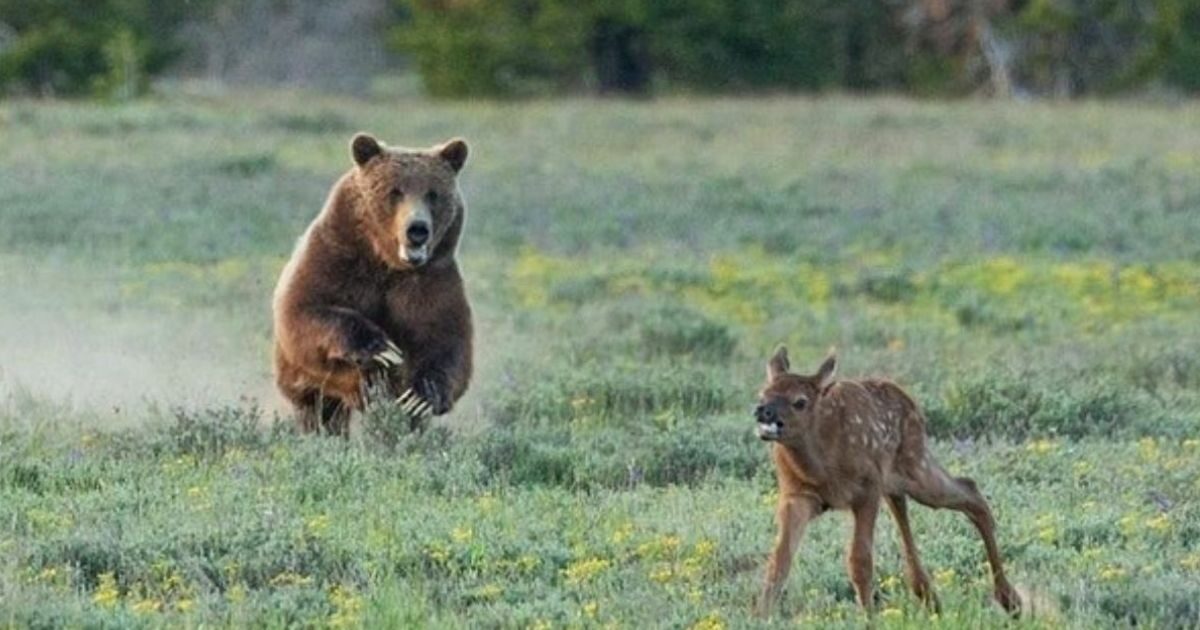 There’s something about God’s creation that is so incredibly humbling to us humans.

As societies grapple with conflict, culture wars and political battles, out in the wild, the circle of life continues as it has for millennia.

One of the world’s most famous grizzly bears, dubbed 399, was recently captured in a series of stunning photographs chasing and taking down an elk calf with her four youngsters in tow.

Outdoor Life explains that Grizzly 399 is a 7-foot, 400-lb sow who lives in Wyoming’s Grand Teton National Park and Bridger-Teton National Forest. While she lives near humans, she’s never had a bad run-in with them. But she has made quite the impact on the local elk population; for the sake of feeding her cubs, of course!

399 was born in a den in Pilgrim Creek, Wyoming, when she was given the tracking number 399 by the Yellowstone Interagency Grizzly Bear Study Team. She has since reared 16 cubs and attracted quite an admirable following for a bear.

The massive creature is so well-known, in fact, that she has her own Facebook and Twitter accounts — unbeknownst to her, I’m sure.

No, the big mama is certainly far more interested in the things that concern bears, namely, the basics of survival.

While many a city-dwelling modern these days will balk at the idea of a human hunting down prey to consume, there’s actually nothing more natural, and 399 just put on a glorious display of what this looks like in the animal kingdom.

The Jackson Hole Conservation Alliance recently published incredible photographs of the grizzly mother hunting down an elk calf, which was captured by naturalist and guide Rafael Sandoval.

These images will surely take your breath away:

“So this just happened last night and my heart is still racing,” the photographer was quoted as saying on the group’s Facebook page.

“This grizzly sow #399 bagged an elk calf for a dinner for five after an intense chase For the past few months, bears in the Greater Yellowstone Ecosystem have been browsing on nutrient dense vegetation such as grasses, flowers and roots,” he explained.

“However, as prey species like elk, bison and deer begin dropping calves like it’s going out of style, the bears have begun to switch over to more savory menu options. The CALFeteria is open, folks!”

One commenter who said she also witnessed the incredible event was in awe of the triumph — and tragedy — on display.

“We were there and witnessed the whole thing. I’m not sure if we were close to this photographer but we were by the ranger’s truck and she was coming straight for us initially before the calf turned. I will be forever ‘shook’ and amazed at the power of the Grizzly Bear,” she wrote.

“Also, watching her let her cubs eat first and making sure they were ok was amazing. The mother elk crying for her baby was also tough. It was definitely a National Geographic moment in real life!” she added.

As a wildlife enthusiast and the wife of a hunter, it has always amused me when people try to claim there is something “cruel” about stalking and taking down an animal in the wild — when there are few means of obtaining sustenance that could possibly be more natural.

Grizzly bears don’t waste time worrying about whether it might be more ethical or environmentally friendly to simply continue to rely on vegetation and let the elk live. Were they to do so, it would be humans who would grow concerned about the issues that arose with an overpopulation of elk, as it happens, something which could end up being harmful to the elk themselves!

No, 399 was designed by God to hunt and consume creatures who happen to fall below her on the food chain, and that’s exactly what we see her doing for the sake of feeding her cubs and teaching them how to hunt so they can do the same for their young when they grow up, too.

This was an incredible moment to capture on camera, and it is a blessing to be able to witness such a stunning display of the power of nature in action — quite literally, in this case!

AZ Audit Reviewing Thousands of Ballots Where Machines Did Not Detect a Single Vote for President, Audit Liaison Says