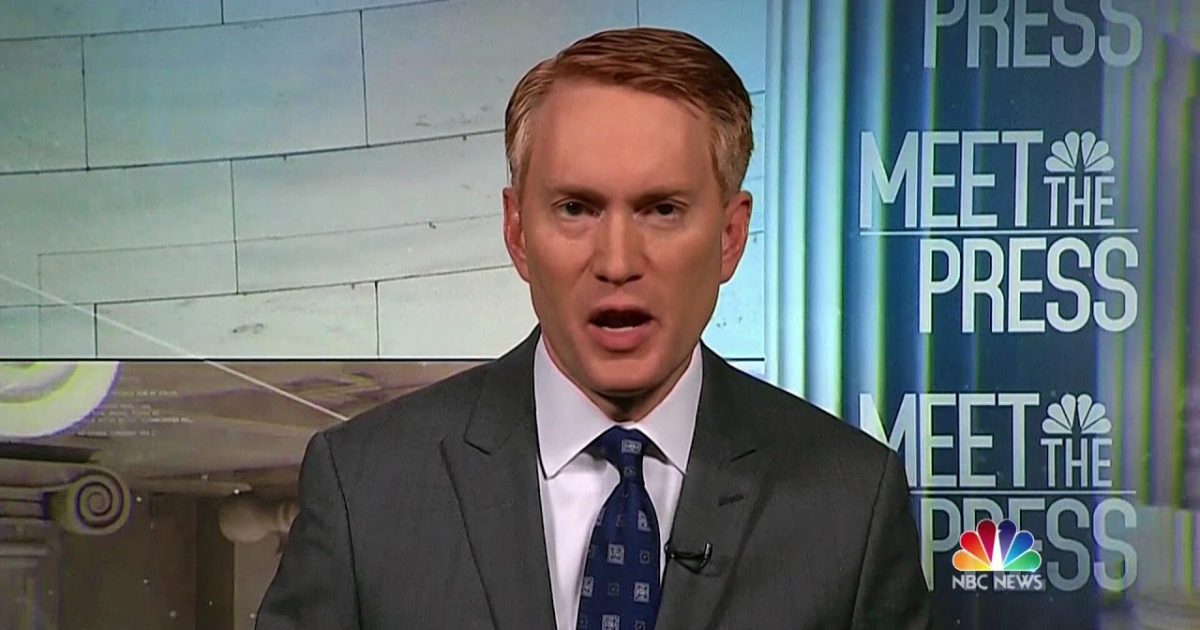 There are a lot of misconceptions circulating in the media these days, particularly about what is transpiring along our Southern border.

Thankfully, there are some people trying to get the media on the right path. Senator James Lankford (R-OK) recently appeared on NBC with Chuck Todd, to set the record straight.

Specifically, he wanted America to know that our government had NOT lost any illegal immigrant children who had been detained along the border.

Chuck Todd: Let me start with just a basic question. Have we misnamed this? Is this more of a refugee crisis than an immigration crisis? Considering this is a specific area — region of the world where this is emanating from?

Senator James Lankford: Yes, this has been a long-term issue. I’m not sure I’d call it a refugee crisis. Obviously, some would be able to target that, but it has been destabilizing for a long time.

This is something the Obama administration saw as well. We started three years ago investing about $650 million into El Salvador, Honduras, and Guatemala to help provide some economic activity for them. They helped provide some stabilizing force in their government, and to be able to provide them a reason to be able to stay.

Chuck Todd: Let’s go to some specifics here because we haven’t gotten a lot of answers from the Trump administration, maybe you have gotten some of these answers. Maybe they’re fulfilling their duty to at least let you know what’s going on in Congress.

Senator James Lankford: We do. Let me clarify this. We know where every single child is. This is an issue that’s that’s gone out there somewhat in some of the other media that’s not been responsible with this, that with the assumption that the administration lost track of that.

These are not political appointees. These are career folks. They know where every child is to be able to connect them to their parent or their relative that came. Many of these children that came we don’t know if they’re with a parent or not, and so trying to be able to make sure that we’re connecting the dots on this.

As you know, of the 12,000 or so children that are either total, 10,000 of those are unaccompanied minors. They came with no parent at all. And then you’ve got another 2,000 that are out there that came with a family member of some type, they’re all in HHS custody, and they’re trying to be able to reconnect them now. But HHS often puts them in foster care across several states because they can’t handle the load on the Southern border.

What can you tell us about that situation?

Senator James Lankford: Yes, it’s a mixture of all of those actually. We’re trying to be able to work through the process to connect with the adult. Several of the adults are given some kind of ankle monitoring system, ankle bracelet, so it monitors them until they get to what’s called a notice to appear hearing in the days ahead.

As you put in your lead-in, which was very well done, the lead-in gave the problem. The Flores Settlement from 1997 says that you can only hold that child for 20 days. It takes about 35 days to actually do a hearing. And so, what the court set up in 1997 was this conundrum. You either have to release them if they come as a family into the country and hope they show up, or you can’t keep them and actually go through a hearing on it.

Only two — to be very clear, only 2 percent of the family units that come to the United States illegally actually go through and actually have the notice to appear, finish up with the notice of removal, and actually leave the country. So, the family units that are coming here, 98 percent of them end up somewhere in the country, most of them illegally, because they never actually leave after they’re given the responsibility for an order of removal.

Chuck Todd: Your congressional fix here, let’s get into the Flores Amendment here and this 20-day conundrum, because the Trump administration’s asking for relief from the courts. They’re probably not going to get it, because the Obama administration asked for the very same relief, they didn’t get it either. You want to defund it.

The lowest level, what I’m trying to find is what the lowest common denominator, that’s defunding it, so we can actually make sure we function together. The best thing that we can do is actually try to reform it, and so that we actually keep families together, keep them there long enough, that we can actually get through a proper hearing.

Chuck Todd: And are you in favor of using military bases to house these families? It appears that DHS has made a request to the Defense Department. Is that something you think is a good idea?

Senator James Lankford: I do think that’s a good idea, because there are locations for that. President Obama used military bases in 2014 for unaccompanied minors. Some of those were in my home state, in Oklahoma, which, by the way, members of Congress from my state tried to visit those facilities that are in my state, where President Obama was holding those unaccompanied minors. They were turned away at the door and told that they could not come in, the same thing that’s happening now.

So some people try to say, this is something new that the Trump administration is doing, blocking people out.

Chuck Todd: Should that be the process? Or should there be more transparency? Or do you feel as if the White House has been fully transparent with the American public about what they’re trying to do here?

Senator James Lankford: I don’t, actually. Now this has been one of the great frustrations. I think the White House has not been clear on how bad the Flores settlement is. They tried to say it and say it and say it.

The challenge is, you shouldn’t just allow anyone to be able to come in at any time, to be able to view a spot where there are children present. I think it’s entirely reasonable. This has been HHS’s policy for a long time to say, if you’re going to come into a location where there’s children, we need to know who you are, we need to know the background. We can’t just trust if you show up with an I.D., that that’s who that is. Make an appointment.

If you do that, you can get in to get a chance to see them, as a member of Congress, just like I did during the time when President Obama had those children here in Oklahoma at a military base as well.

Obama Former DHS Secretary “We can’t have catch and release, we deported, or repatriated or returned over a million people”