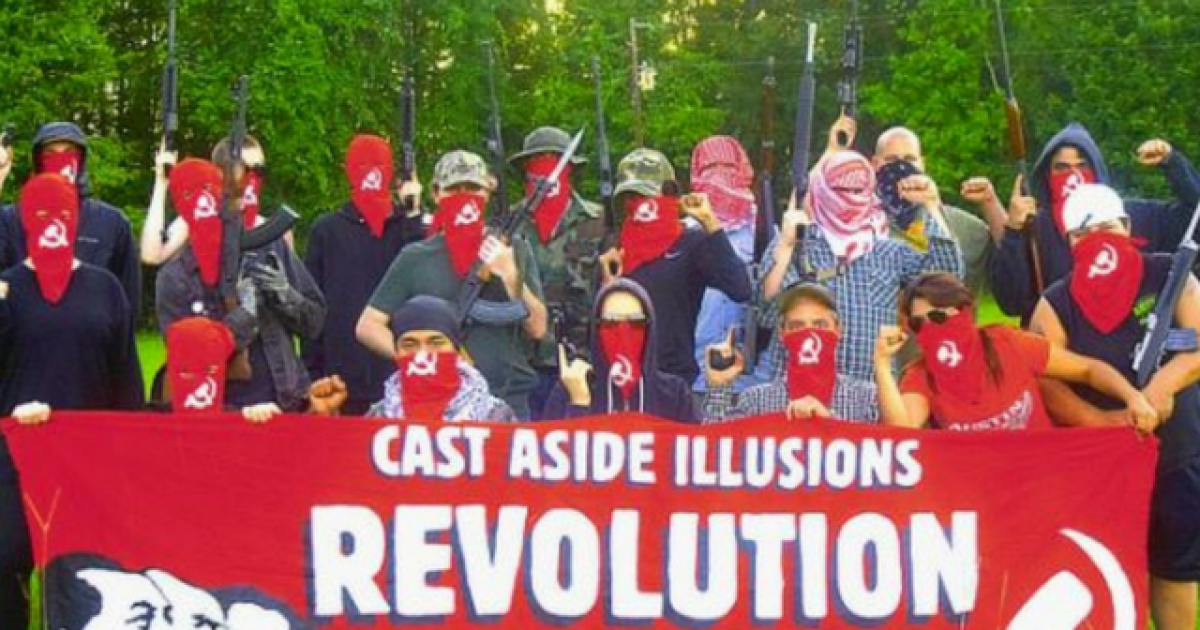 No, this is not about a group of communist rebels in a banana republic and you have not in fact somehow stumbled upon a news story from 1976.

This is happening now, in our country, and you should be very, very concerned.

While many of the most far-left voices in the nation right now are openly plotting ways to limit the Second Amendment rights of millions of law-abiding citizens, right under everyone’s noses, violent anti-Trump insurgents are arming themselves and openly avowing to use violence to stop “fascists”.

One might argue using violence to voice opposition to your ideological enemies is far more fascist than standing up for the right of every citizen to arm themselves against the threats of tyranny and crazy neo-communist leftists, of course, and that would be perfectly valid.

Never have I heard a better reason to arm oneself in 2018 than what you’re about to hear.

Red Guards Austin, a self-proclaimed Marxist-Leninist-Maoist violent antifa group, has called for the formation of a “Red Army.” The group itself is based out of Austin, Texas, but works in tandem with Red Guards Kansas City, Red Guards Pittsburgh, Red Guards Los-Angeles, and Red Guards Charlotte to “annihilate” those they believe are “collaborators” or “fascist.”

Here are some of the group’s stated goals, from their website:

“…we encourage the formation of paramilitary organizations on two levels. The first being those who are mainly unarmed but are prepared and trained to carry out fist fighting or using blunt weapons like axe handles or flagpoles as well as shields and basic armoring. The second level is the more advanced embryo of a Red Army, which is trained militarily and operates as soldiers all the time, engaging in production and mass work among the proletariat and the oppressed nation’s people.”

“It is time for Austin to stand up, to shake off bad leadership trying to impose itself on antifascism and come together under a better model of actual resistance and not token performance. When we organize and lead actions the fascists do not march every step they take is met with physical confrontation and they are bombarded from all sides.”

“On the basis of our principled united front work, fascists and their collaborators can be drowned out, run out, routed, beaten bloody, and even annihilated. These are our principles and we aim to hold them to the very finish.”

Um…isn’t this highly illegal? Or at the absolute very least, shouldn’t this group be kicked off social media?

No, of course not. We are unaware if they’re under investigation by the FBI as they absolutely ought to be (can you think of a better example of a “hate group”? Somehow, I doubt they’re on the SPLC’s list), but they’re definitely not only active on Facebook, they’re recruiting on Facebook.

Social media is essential to the Red Guards Austin’s ability to not only recruit, but also radicalize and mobilize other far-left extremists. With almost 8,000 followers on the Austin cell’s Facebook group page, and constant posts calling for other angry and violent masked individuals to join, why is a group such as this able to continue using the platform to recruit and insight violence?

…they’re openly calling to form violent militias, trained and ready to physically attack others based on what their idea of fascism is, while conservative accounts are being censored and shadowbanned for posting things these social media platforms don’t want to gain any traction that have no mention of violence or hatred. How can any of these social media platforms claim there’s no bias with a straight face??

Trump Speaks Out About Cohen Guilty Plea, Trolls Him on Twitter