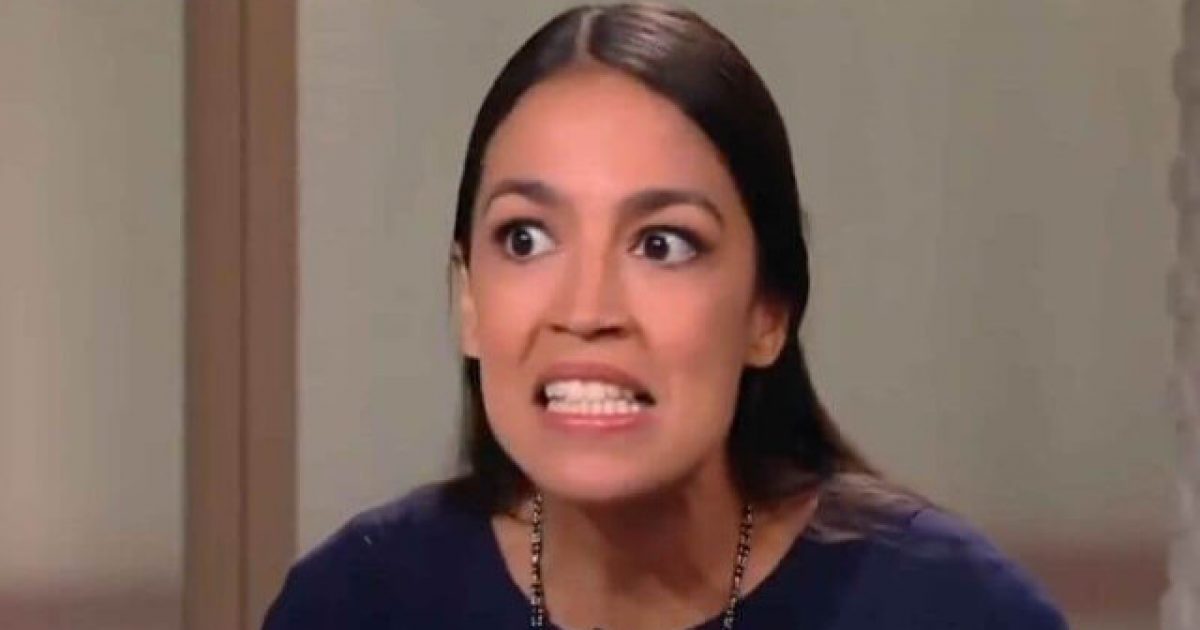 Rep. Alexandria Ocasio-Cortez continues to prove that she’s far too incompetent to be sitting in a seat in Congress by constantly opening her mouth and allowing nonsense to spew forth for the rest of us to digest.

The latest example of her mental ineptitude is attributing the historic flooding that Washington, D.C. experienced to climate change, a statement that ended up earning her a sharp rebuke and school lesson from meteorologist Dr. Ryan Maue.

Historic flash flooding struck the nation’s capital Monday morning when nearly 3-5 inches of rain fell over the capital area in less than two hours. The flooding stranded motorists, flooded the Metro, and even forced the closure of the National Archives Museum, WRC-TV reported.

“Unprecedented flooding is quickly becoming a new normal,” the Democrat claimed. “Despite that, Republicans are tripling down on fossil fuels w/no plan to transition off them, or make the critical infra investments we need to prep for the climate crisis. Each day of inaction puts more of us in danger.”

It’s more than 1 day or 1 storm; it’s all of them. Places are flooding where they haven’t before; there are 90-degree days in Alaska in June. The GOP will mock & sow confusion until it’s their home swept away.

First a tornado and now a flash flood.

The Congresswoman does not miss an opportunity to turn a weather event she experiences into a political statement and blame Republicans.

She's right that cities need to invest in infrastructure but a slow-moving t-storm isn't "climate" https://t.co/X4zoNP0lXW

You should resist the emotional temptation to blame EVERY weather event on climate change.

The reference from the National Academies:
Attribution of Extreme Weather Events in the Context of Climate Change (2016)https://t.co/hyY5TxVHTz

This science is cutting-edge … but the politics obviously isn't. pic.twitter.com/l3dKxluoYo

It’s becoming clearer and clearer that AOC has no earthly idea what she’s saying or doing, but is simply squawking out the same trite and tired left-wing talking points that every other Democrat does so she can appease the base.

However, her ignorance on the actual topics and issues at hand bleeds through her facade and makes it clear she’s just a stooge and nothing more. If she wants to be taken seriously, she needs to break with the hive mind and think for herself.

…For charges in New York…

Nearly half a year removed from the end of Donald Trump’s first term as President, there are still many out there who believe that the former Commander in Chief will soon find himself in legal hot water…and possibly even indicted. Of course, this may be wishful thinking for some on the left, who’ve been trying to get Trump from the very moment that the New York businessman stepped onto the political stage.  This includes prosecutors in the Southern District of New York who’ve been working up a number of possible avenue through which to be a nuisance to the former President. Now, a prosecutor who contributed to a previous attempt to nail Trump to the wall is exuding an extraordinary stance on the subject, suggesting that the 45th President of the United States could be imprisoned in Florida on account of the New York investigation. Former President Donald Trump could end up stuck in Florida if he is indicted in New York and there is resistance to him being extradited, according to a top prosecutor in Robert Mueller’s special counsel investigation. Looking ahead, Andrew Weissmann, a former Justice Department official and FBI general counsel, also suggested such a situation could limit Trump’s ability to inhabit the White House should he run for the presidency again in 2024. “This happens all the time in foreign countries, where essentially you have people who are sort of imprisoned in a country. Here, Donald Trump would be imprisoned in Florida,” Weissmann said during an appearance on MSNBC. “If he went overseas, if he went to any other state, he would be subject to those laws, and so he would really have to stay in Florida. It certainly would be quite an interesting issue if he were to, for instance — this is way down the road…

Is this the end for the groping governor?

There is little doubt that Andrew Cuomo’s political career is on life support, and yet another indicator of the trouble he’s in has arrived this week. Cuomo, who is facing a number of simultaneous scandals of late, has been accused of sexual harassment and abuse by no less than nine women, some of whom actually worked for the New York Governor at the time of their victimization, which adds a scurrilous element to the claims as well. This week, the investigation into these claims ramped up in a big way. Four women who have accused Gov. Andrew M. Cuomo of sexual harassment have received subpoenas to testify under oath, the latest indication that the state attorney general’s investigation into Mr. Cuomo’s behavior has entered a critical phase. The issuing of the subpoenas, which was expected at some point in the inquiry, underscores the investigation’s progress beyond an initial fact-finding phase, during which lawyers interviewed multiple women at length, but not under oath. The attorney general, Letitia James, has not set a deadline for releasing the findings of her office’s inquiry, which began in early March, but it will almost certainly be completed by summer’s end, according to a person with knowledge of the investigation who was not authorized to discuss it publicly. The news comes just days after those within Cuomo’s sphere of influence claimed that the Empire State lawmaker had gone to considerable lengths to attempt a coverup of another scandal he’s involved in, in which he used the state’s nursing home system as overflow for COVID-19 patients back in the beginning of the pandemic.  This led to a number of preventable deaths, and Cuomo has been working to keep the truth of this calamity from seeing the light of day.