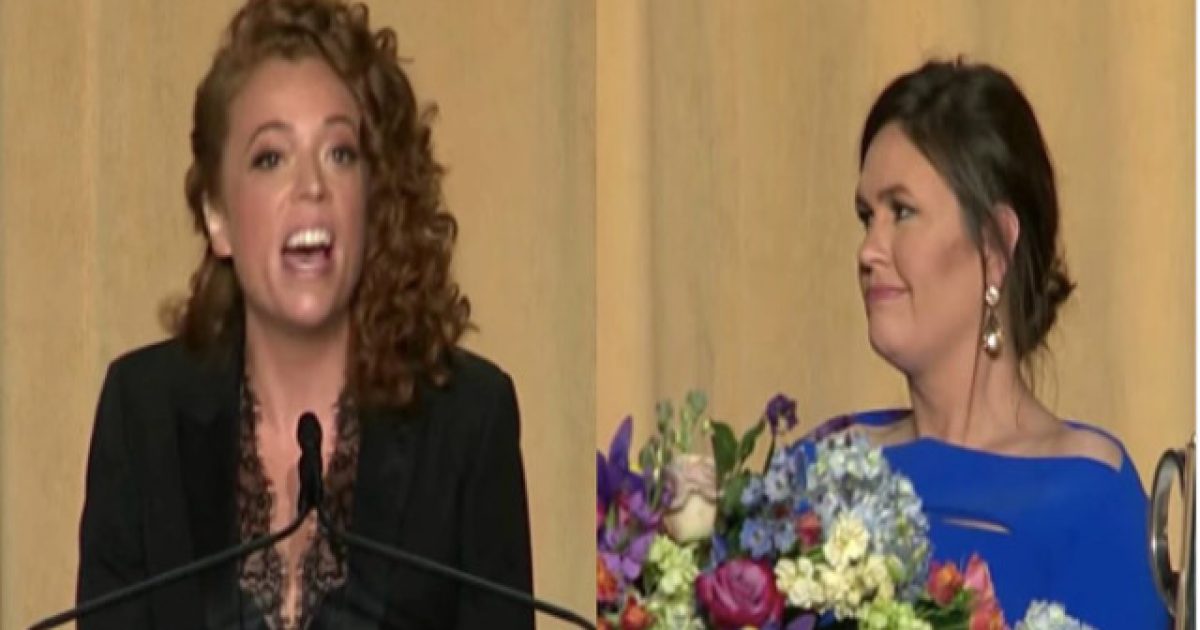 Michelle Wolf, the comedienne who has now become famous after launching a brutal attack against Press Secretary Sarah Huckabee Sanders during the White House Correspondents’ Dinner, is not at all sorry for her comments and is actually doubling down on them.

What makes this situation so egregious is that Sanders was sitting close to Wolf in the audience when she made her comments, which in all honesty were badly done attempts to look cool, hip, and “woke.”

Sanders wasn’t the only target of Wolf’s vitriol. She tossed out insults targeting many different individuals within the Trump administration, causing many folks on both sides of the aisle to be disgusted by her behavior.

In an unapologetic interview with NPR after the dinner, Wolf says she does not regret a word of the speech and that she is “glad [she] stuck to [her] guns.”

When asked specifically about the attacks on Sarah Sanders’ looks, Wolf demurred. The comedian said that her joke attacking Sanders’ makeup “wasn’t about Sarah’s looks.” She added that comparing the White House press secretary to a frumpy fictional character that runs a sex-cult in “The Handmaiden’s Tale” was a reference to her “personality.”

What’s really mind blowing is that Wolf spoke to NPR about things that weren’t caught on camera and the comedienne  slammed Sanders — again — for not clapping when CNN won an award:

Part of the dinner that wasn’t televised is they were giving out awards and everyone was standing to congratulate the people that were getting awards and [White House press secretary] Sarah [Sanders] was sitting. … CNN reporters got awards. … They came up to accept them and [Sanders] sat the whole time, while we all stood and shook their hands. I would say if this is about celebrating the media, she wasn’t there to celebrate the media.

Why would Sanders want to celebrate the news media, who have dedicated the vast majority of their programming time to destroying her, the president, and the pro-America agenda they are trying to pass in order to improve life for American citizens and preserve our liberty?

CNN has built their entire platform the last two years on trying to dig up something, anything, that will bury Trump and get him ousted from office. The reporters from this organization have been increasingly hostile and rude toward Sanders.

Would Wolf be clapping if the tables were turned? Probably not. She’d be a raging mess looking for any excuse possible to lash out at those who attacked her.

Sanders has graciously refused to engage in any sort of back and forth over Wolf’s comments simply stating she was “praying for her.”

Nancy Pelosi Has High Hopes for Reelection, Democrat Victories in Upcoming Midterms, Here’s What She Said