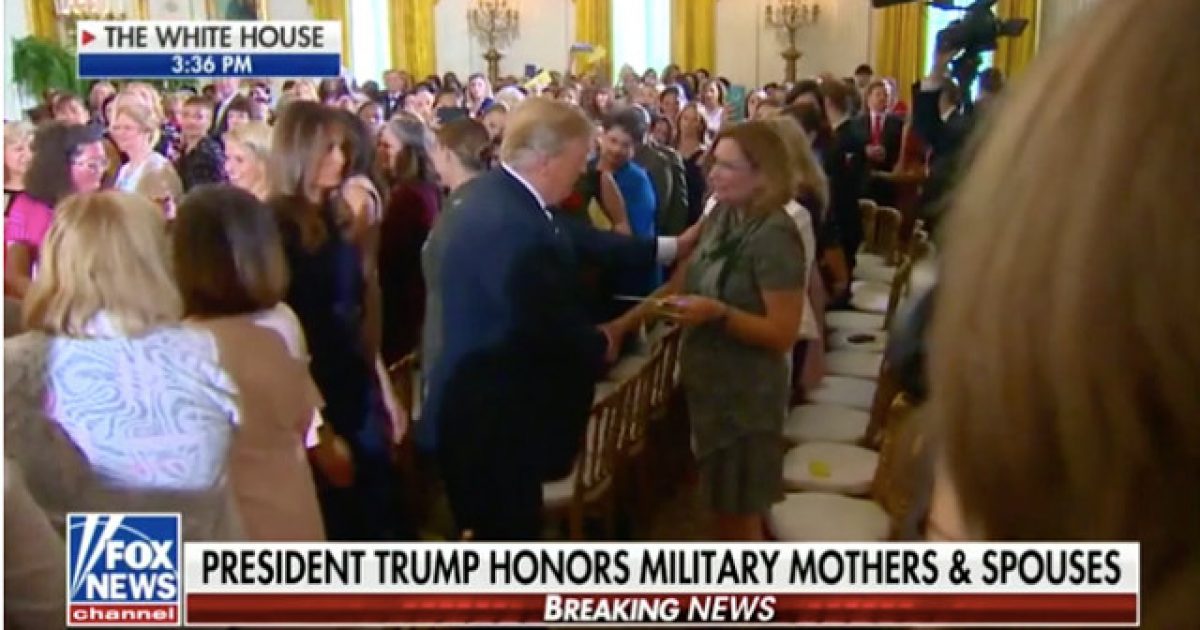 President Trump loves the United States Military, something that’s a breath of fresh air, especially since the previous administration had little to no love for those in uniform who willingly signed up to protect our liberty and way of life from those who seek to destroy it.

And the feelings seem to be reciprocated as many in our armed forces support the president and back him up, having earned their respect with how he sticks to his guns — metaphorically — and never backs down from a challenge.

One military mom decided to show her appreciation for the president by handing him a note during a Mother’s Day event held last week.

“President and Mrs. Trump, I wish to express to you my gratitude for the invitation to the Mother’s Day reception at the White House on May 9th. It is such an honor to be invited and recognized as a mother of a military member. I would like to take this opportunity and tell you a little bit about my Air Force Family”

“As you can imagine, the receipt of this invitation to recognize mothers and spouses of military members means a lot to me. I am, without a doubt, a proud military wife and mother!” she also wrote.

You can read the letter in full down below:

When we often think of our men and women in uniform, the first thing that pops into our minds is how much they all sacrifice. Many end up fighting in war zones and get injured, see friends killed, or lose their own lives.

We can never repay the debt we owe to these brave individuals. However, what often gets forgotten is the sacrifice made by their families too, who lose sons, brothers, sisters, daughters, and so on. These people give just as much, and that truth is why Trump held this Mother’s Day event.

If you see a soldier out with his or her family, don’t stop at thanking him alone, but his loved ones too.

Black Man Wearing MAGA Hat Walks Into Cheesecake Factory, How He Was Treated is Deplorable