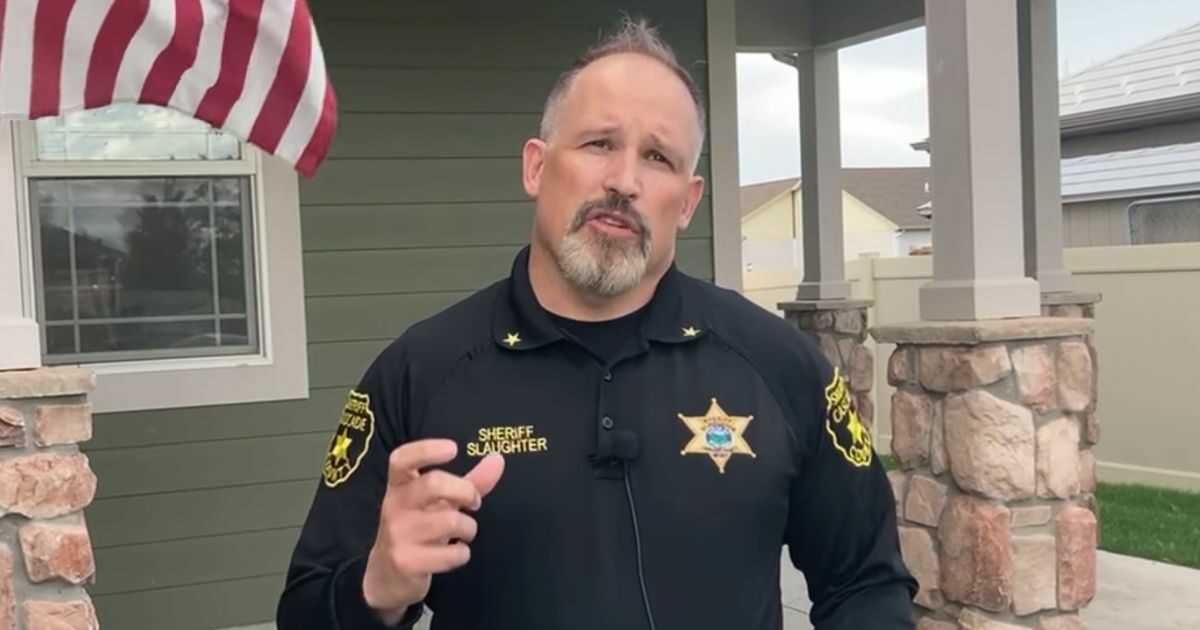 Sheriff Jesse Slaughter of Cascade County, Montana, announced Tuesday he is switching his party affiliation from the Democratic Party to the Republican Party for his 2022 re-election bid, saying the GOP has had his back while his own party has not.

Given all the anti-police rhetoric and riots and the whole “defund the police” movement over the past year, it would not be surprising to see many more in law enforcement follow the sheriff’s example.

“From the very beginning, I’ve made it no secret that I’m a Constitutionalist, that I believe in the Constitution and that I believe it’s concrete and not up to a progressive interpretation. Unfortunately, throughout my term so far I have repeatedly come under fire for my pro-Constitution beliefs,” Slaughter said in a video posted on his Facebook page.

“Twice in public meetings, Democrat elected officials have tried to censor my words and opinions because they did not agree with me,” he continued. “I’ve been chastised publicly and privately for standing up for people’s individual rights and your Second Amendment rights. In one instance I was completely ignored by the state’s Democrat leader when I sought help for our jail overcrowding issues.”

Slaughter went on to express his disagreement with Democrats who back what he described as terrorist organizations.

“Recently, an outspoken former Democrat candidate shared a controversial post on her official campaign page. The post clearly aligned her and those that believe in her with the terrorist organization antifa,” he said.

“I asked the Democrat Central Committee if the candidate had gone too far and would the party tell her to stop. As of this video I have received no response from the Democrat Party and their leadership.”

Slaughter said that in light of this shift in his own party, he would be leaving it.

“It is my duty to serve all people of Cascade County, regardless of your political beliefs. To do this effectively I have to know I have the support of the party I’ve aligned myself with. So I’m officially kicking off my reelection campaign to remain your sheriff. I hope I can count on your support as I move my name to the Republican ticket,” he said.

Cascade County is located northeast of the state capital of Helena in central Montana.

“This is not a decision I take lightly, but it is the right decision,” Slaughter said. “I’ve continually found support from the leaders of the Republican Party. More importantly, they have shown unwavering support for the profession of law enforcement.”

Slaughter elaborated on this point, telling the Great Falls Tribune, “It just seems like every time I need law enforcement support the Republicans are always right there.”

“Both Sen. [Steve] Daines and Gov. [Greg] Gianforte texted and called me last night, and both of them said, ‘You know we never cared about your party, we just back what you do and who you are.’ They never cared about the party, they just cared about the mission that law enforcement is conducting every day. I don’t get that from the Democratic Party. I get ignored, basically.”

The sheriff promised that though he is switching parties, it will not impact how he does his job.

“This will change nothing that I do on a day-to-day basis,” Slaughter said, “it’s just standing up for professional law enforcement and saying I’m not going to align myself with radical party leadership that doesn’t respect the ideals that the people of Cascade County respect.”

“We share his concerns regarding lack of respect for the profession of law enforcement by the Democratic Party as well as the local candidates who have aligned themselves with radical and even terrorist organizations,” she said in a news release, according to KULR-TV.

The Center Square reported earlier this month that three sheriffs in Virginia switched their party affiliation from Democrat to Republican after the Democrat-controlled legislature passed bills the officers saw as anti-police.

Last year, sheriffs in Indiana and Pennsylvania did the same.

Denigrating or at the very least failing to properly support law enforcement will not be a winning issue for Democrats over time.

If people don’t feel safe in their own communities, it doesn’t matter what other woke agenda items or government programs liberals offer — they will pay dearly at the polls.