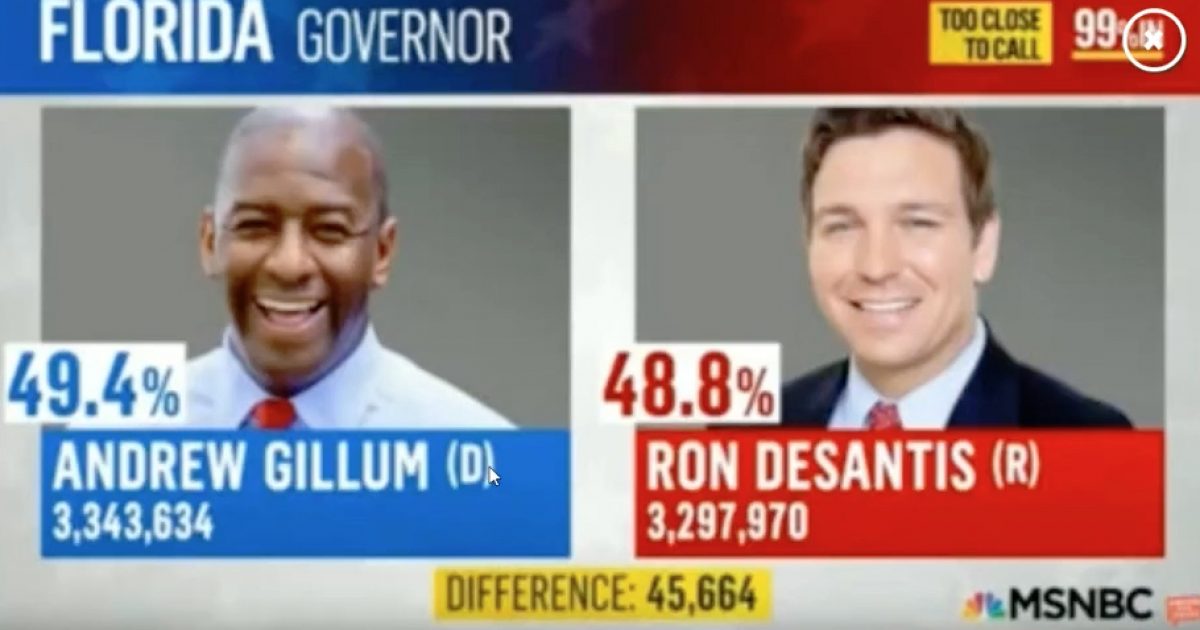 American elections are sacred, as they should be, as they help put a hand of the people on the rudder of our nation.

So, it is with the utmost sincerity that we must protect these institutions of liberty, for without a chance to express ourselves as equals, can we even call ourselves American anymore?

This means, in essence, that any affront on our right to be heard by ballot should be, by definition, unconstitutional, and morally treasonous.  With the advent of high digital technology in the latter half of the 20th century, protecting ourselves from such treachery has become a difficult job, and as such has created a healthy bit of paranoia when it comes to “rigging”.

Of course, the abhorrent behavior of Hillary Clinton during the 2016 Presidential election didn’t help the cause either.

So, even the simplest of “goofs” can raise an eyebrow or two, especially in an election of such extreme importance.

In yet another misfire at the most steadily misfiring of networks, MSNBC accidentally aired the results of Florida’s gubernatorial a race, as Deadline put it, “a wee bit too early” — the night before the election.

The big winner: You guessed it, the Democrat on the ticket, Tallahassee Mayor Andrew Gillum, who managed to secure a victory. With 99% of the vote tallied, MSNBC imagined that Gillum had secured 49.4% of the vote over Republican Ron DeSantis’s 48.8%.

The error was captured forever by the internet:

The defense of the maneuver was predictably lackluster.

The gaff left a humiliated “All In” host Chris Hayes offering his audience a “quick clarification.”

“Just want to say,” he said, “earlier this hour, we showed a graphic of the Florida gubernatorial race. May have caught your eye because our system had inadvertently populated some test numbers. Obviously, we do not yet have any vote totals here, the night before the election. That was a misfire. Don’t worry. I was pretty confused when I saw it up there, to see it myself.”

In other words, not “Fake News,” just “Incompetent News.”

We’ll just have to wait an see how eerily close these “test numbers” were at the end of the night tonight.

Reporter Thought She Hung Up Phone, Ends Up Giving GOP Candidate an Earful and The Result is Costly