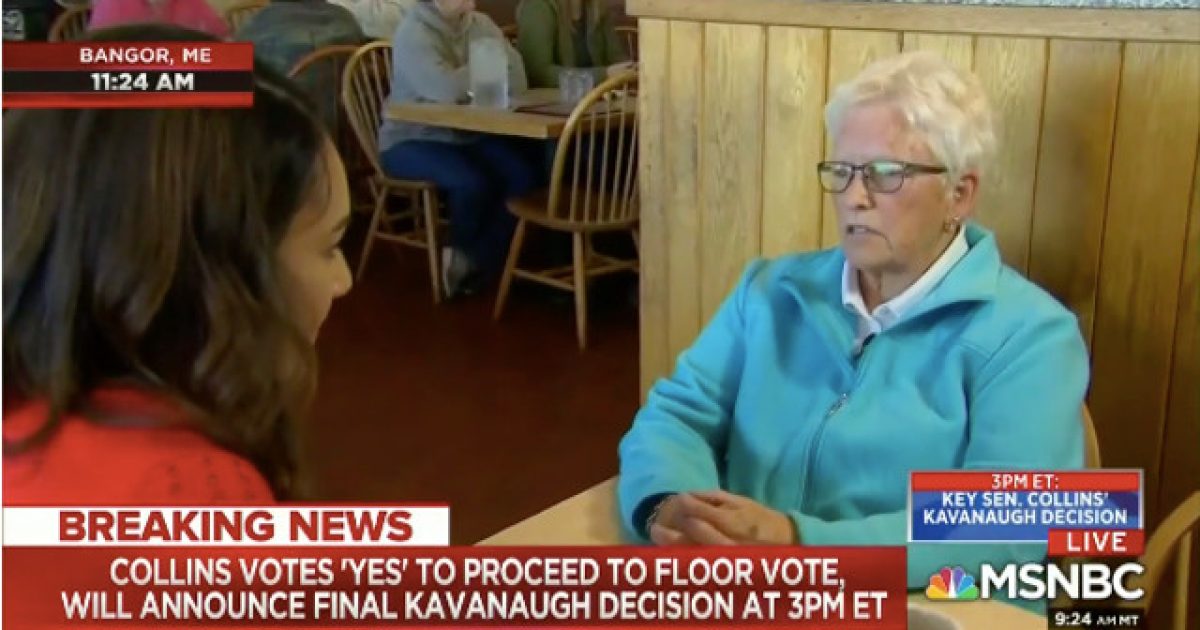 An MSNBC reporter thought she was going to corner a pro-Kavanaugh woman during an interview in Maine, but clearly got way more than she bargained for.

Terry Hamm-Morris told the reporter that she has not seen any evidence to corroborate the sexual assault charges against SCOTUS nominee Brett Kavanaugh and thus she wanted Sen. Susan Collins to vote in favor of confirming him.

She also went on to denounce the fact that some of the anti-Kavanaugh protesters making a big ruckus for working for George Soros funded organizations.

“I think Brett Kavanaugh has been unjustly accused of these things,” Hamm-Morris said. “I don’t know why Christine Ford made the allegations that she did.”

“As a woman, you’ve seen all of these other women protesting in Sen. Collins’ office,” the MSNBC reporter replied. “Does that affect you at all?”

“No,” Hamm-Morris said flatly. “I think it is a reaction that has been fueled by money from the George Soros campaign, from Nancy Pelosi … I don’t think a person’s life should be ruined just for political expediency.”

The MSNBC reporter incorrectly claimed that Kavanaugh admitted in a Wall Street Journal op-ed that he “regrets” some of the things he did, but was quickly corrected by Hamm-Morris.

“No, he regretted some of the things that he said when he answered,” she asserted. “And I don’t blame him for being upset … I would be pretty ticked off myself.”

You can watch the full video over at The Daily Caller.

Don’t you just love a bold, brave conservative who isn’t afraid to stand on the truth, no matter how hard folks on the left might try to push, shame, and bully them into doing otherwise?

It’s a truly beautiful thing, and we could certainly use more of that these days.