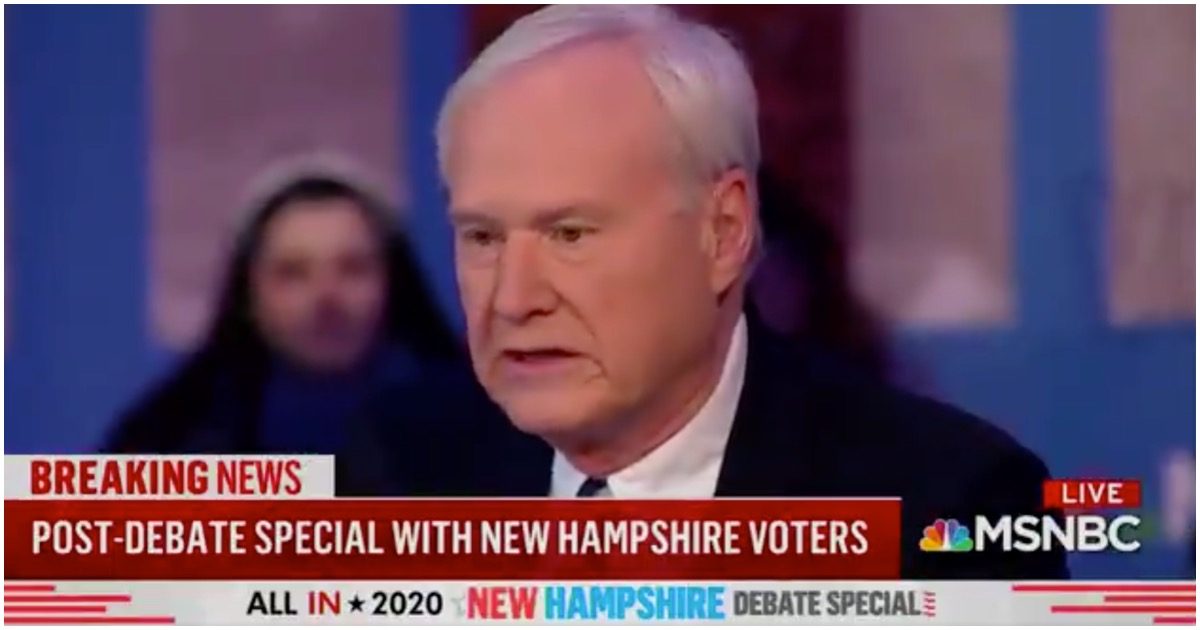 Only one 2020 Democrat presidential candidate signaled their opposition to a Democrat Socialist running the nation. Definitely something to think about. Socialism has become so prevalent in the Democrat Party that even far-left MSNBC host Chris Matthews is telling hopefuls it’s time to knock it off.

It isn’t a good look for the left when they’ve lost Matthews. After all, this is the guy who had a “tingle” up his leg for Barack Obama. Ultimately, Matthews, James Carville, and a couple other big name liberals are warning Dems that if they keep going further and further left, it is increasingly likely that President Trump wins a second term in the Oval Office.

But the candidates are not listening.

Here’s more of his rant…

These MSNBC hosts may laugh, but Chris Matthews is a reminder that this is not your father's Democratic Party

The Democratic Party used to know exactly how dangerous socialism is

Instead, tonight we saw almost every 2020 Democrat say they would support a socialist for President pic.twitter.com/3RmLnAKobO

For as ridiculous as Bernie Sanders’ policies are, at least the guy is consistent. He makes it clear that he’s a full-on socialist and he’s not ashamed of it – for whatever reason.

Alexandria Ocasio-Cortez continues to show she knows so very little of which she speaks. She responded to former Florida governor, current Florida senator, Rick Scott.

Scott shut her down hard.

It all began with then-2020 contender Sen. Cory Booker’s (NJ) thoughts on creating a federal license for gun owners.

Sen. Cory Booker is rolling out a sweeping gun control agenda that includes requiring licenses for all gun owners, as well as more standard proposals such as universal background checks and banning assault weapons https://t.co/8VZSGRAgbI

🚨BREAKING: the latest terrible idea to come out of the Democrats' 2020 primary is a federal gun registry. If you want to buy a gun, @CoryBooker wants you to register with the federal government.

This would be scary if Booker had any chance of becoming President. (1/2) https://t.co/uJRLXo054E

What's next? Will we have to register sharp knives? Maybe @AOC will make us register every time we buy meat as part of her #GreenNewDeal.

The Democrats are officially the @BernieSanders Party. They want America to be less prosperous and less free. (2/2)

Enter Ocasio-Cortez, who doesn’t get it:

That a sitting US Senator can say something lacking so much critical thinking + honesty is embarrassing to the institution.

If you were a female candidate, maybe you’d be called “unlikeable,” “crazy,” or “uninformed.”

But since you’re not, this inadequacy is accepted as normal. https://t.co/KLkaYxfT6K

That a sitting Congresswoman doesn’t understand sarcasm would be embarrassing to the institution if you hadn’t embarrassed yours to the point of irrelevance already.

America rejects socialism and will continue to. https://t.co/bicJ8PEfD5