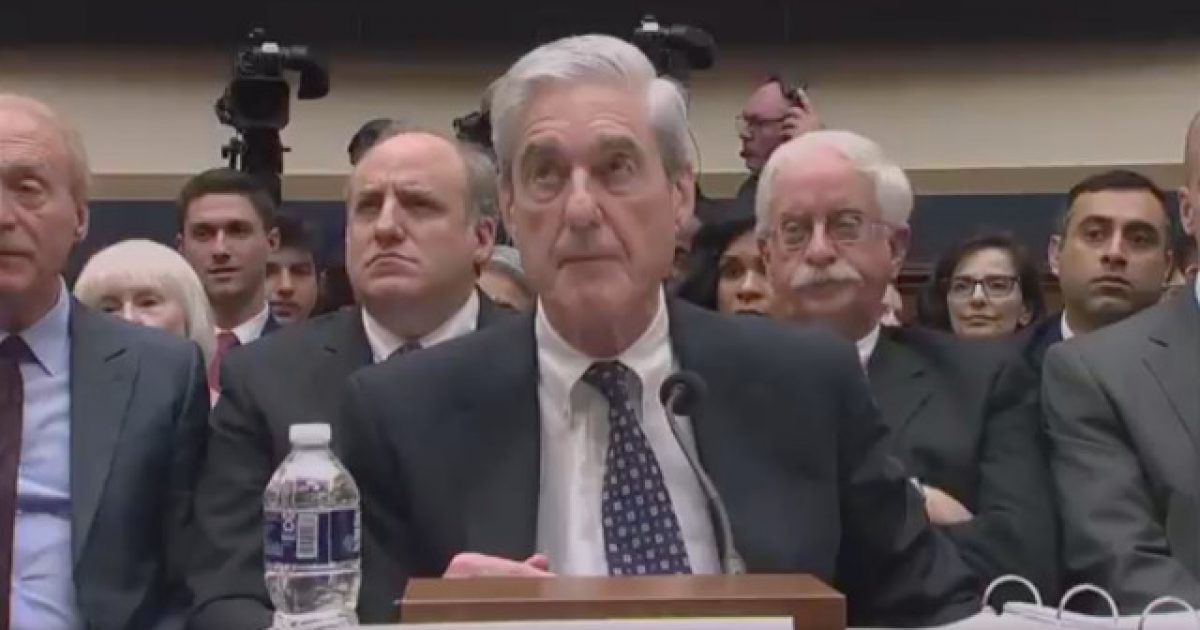 Former Special Counsel Robert Mueller gave congressional testimony on Wednesday, during which he was asked by Rep. Steve Chabot to explain why Fusion GPS, the company that hired Christopher Steele to put together the now infamous “Steele Dossier” that was used to launch the investigation into President Trump’s 2016 presidential campaign.

The Steele Dossier was mentioned several times in the Mueller report, but the origins of the dossier were conveniently left out. Founder of Fusion GPS, Glenn Simpson, who was an important figure in creating all the “evidence” against Donald Trump was also not mentioned in the report.

Here’s more from The Daily Wire on the exchange between Chabot and Mueller:

At the hearing, Chabot asked Mueller a simple question. Chabot referred Mueller to page 103 of Volume 2 of his final report, in which he describes “the firm that produced the Steele reporting,” but does not name the firm. Chabot asked Mueller: “The name of that firm was Fusion GPS, is that correct?”

Mueller, who has appeared confused at numerous questions so far during this hearing, looked at his binder, which contained a copy of his report, and asked: “And you’re on page 103?”

Mueller’s response was, “I’m not familiar with that.”

Chabot went on to put the screws to Mueller, grilling him over why he didn’t dig into Fusion GPS’s collusion with Russia during the 2016 election.

“At the same time Fusion GPS was working to collect opposition research on Donald Trump from foreign sources on behalf of the [Hillary] Clinton campaign and the Democratic National Committee, it also was representing a Russian-based company which had been sanctioned by the U.S. Government. Are you aware of that?”

Mueller stated that all of that was “outside of my purview.”

Chabot then went on to bring up how Natalia Veselnitskaya, the Russian lawyer who met with several top dogs in the Trump administration — including Trump Jr. and Jared Kushner — had been working with Fusion GPS since 2014.

“You didn’t mention that or her connections to Glenn Simpson and Fusion GPS in your report at all. NBC News reported the following: Russian lawyer says she first received supposedly incriminating information she brought to Trump Tower describing alleged tax evasion and donations to Democrats from none other than Glenn Simpson, the Fusion GPS owner.”

Mueller went on to say that the “matter was being handled by others at the Department of Justice,” though he didn’t go into any detail about who was handling that or what they found.

This exchange between Rep. Steve Chabot and Robert Mueller raised eyebrows in our live chat.

“If Mueller doesn't know who Fusion GPS is, this could be a long hearing,” said reporter @joshgerstein.

So Mueller’s answer to everything was “outside of my purview,” which seems like a cheap and easy way to deflect a serious question that, if answered truthfully, would paint a very negative picture of the man and his work on this investigation.

It certainly seems like the pieces of the puzzle are fitting together. It seems the Democratic Party had it out for Donald Trump from the beginning and were willing to do anything possible to stop him, which included this failure of an investigation.

Talk about fear. These folks quake in their boots over Trump. Very telling, isn’t it?

VIDEO: GOP Lawmaker Gets Mueller To Admit He Held Trump To Different Standard