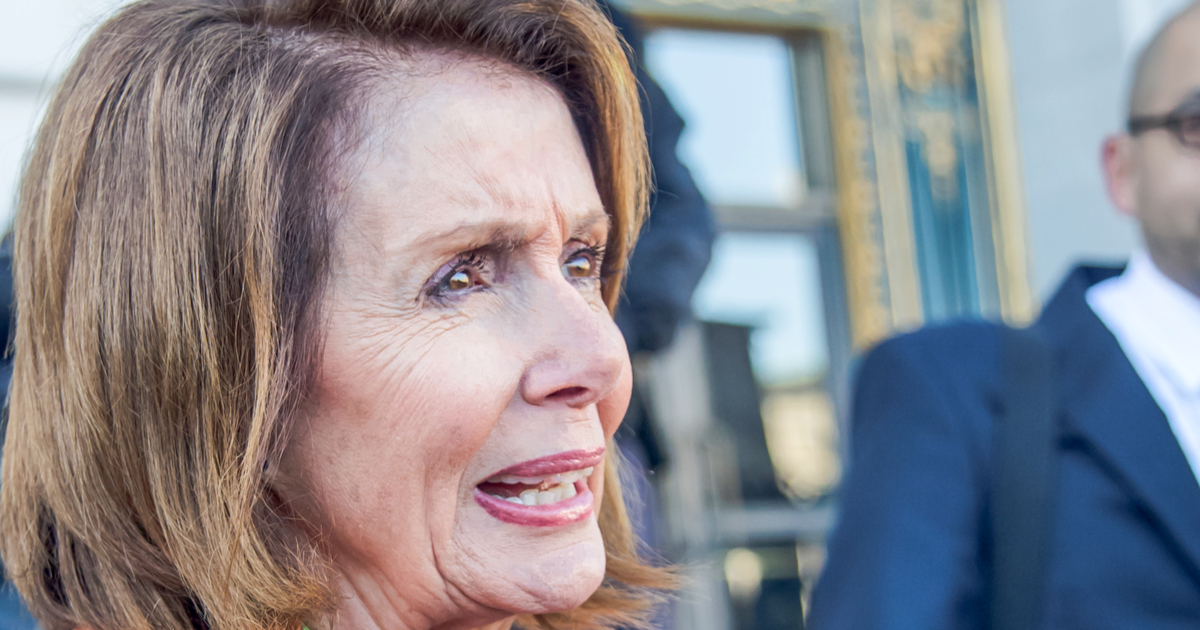 There is an increasingly petty war raging in Washington DC this week between liberal lawmakers and the President himself.

Trump is refusing to budge on his proposed border wall, while still continuing to maintain hope that the democrats will eventually return to the negotiating table.

On the other side of the conflict is Nancy Pelosi, whose demeanor has deteriorated over the course of the the last 48 hours.  Now, after her daughter gruesomely described the elder Pelosi’s toughness as likely to induce decapitation, it seem that Nancy has turned the sentiment metaphorical.

Instead of actually decapitating the President, (something we’ve already been forced to imagine thanks to Kathy Griffin), she’s going to cut the metaphorical head off of the metaphorical snake that she has anthropomorphized Trump as…at least for the sake of that long-winded anecdote.

In cowboy talk’; she’s going to head him off at the pass.

On Wednesday, Pelosi wrote to the president to rescind her Jan. 3 invitation for him to address Congress on January 29, in keeping with tradition.

Pelosi blamed a lack of available security due to the ongoing partial government shutdown: “This requires hundreds of people working on the logistics and security of it. Most of those people are either furloughed or victims of the shutdown. The president’s shutdown. But that isn’t the point. The point is security. … [It’s] a security decision which is completely out of my hands.”

The only problem with that excuse was, well…everything.

Secret Service is fully ready to offer full protection during the #SOTU, a sr. law enforcement official tells @petewilliamsnbc.
"It's a no-fail mission," the official says.
Though USSS personnel are not being paid, the intelligence & protection functions are fully staffed. (1/2)

A senior DHS official tells me that Speaker Pelosi’s claim regarding security concerns surrounding the State of the Union during a shutdown has “zero” credibility… “It is a serious event but one we can handle.”

Fox News's John Roberts says a DHS official told him that no one from Pelosi's office called the Secret Service to ask if they had concerns about SOTU before she sent that letter. #StateoftheUnion #GovernmentShutdown

We won’t hold our breath for this sort of brazen nonsense by Nancy Pelosi to get “fact checked” any time soon.

ICYMI: FBI Opened Investigation to Learn If Trump Was ‘Secretly A Russian Agent’

Is this the end for the groping governor?

There is little doubt that Andrew Cuomo’s political career is on life support, and yet another indicator of the trouble he’s in has arrived this week. Cuomo, who is facing a number of simultaneous scandals of late, has been accused of sexual harassment and abuse by no less than nine women, some of whom actually worked for the New York Governor at the time of their victimization, which adds a scurrilous element to the claims as well. This week, the investigation into these claims ramped up in a big way. Four women who have accused Gov. Andrew M. Cuomo of sexual harassment have received subpoenas to testify under oath, the latest indication that the state attorney general’s investigation into Mr. Cuomo’s behavior has entered a critical phase. The issuing of the subpoenas, which was expected at some point in the inquiry, underscores the investigation’s progress beyond an initial fact-finding phase, during which lawyers interviewed multiple women at length, but not under oath. The attorney general, Letitia James, has not set a deadline for releasing the findings of her office’s inquiry, which began in early March, but it will almost certainly be completed by summer’s end, according to a person with knowledge of the investigation who was not authorized to discuss it publicly. The news comes just days after those within Cuomo’s sphere of influence claimed that the Empire State lawmaker had gone to considerable lengths to attempt a coverup of another scandal he’s involved in, in which he used the state’s nursing home system as overflow for COVID-19 patients back in the beginning of the pandemic.  This led to a number of preventable deaths, and Cuomo has been working to keep the truth of this calamity from seeing the light of day.