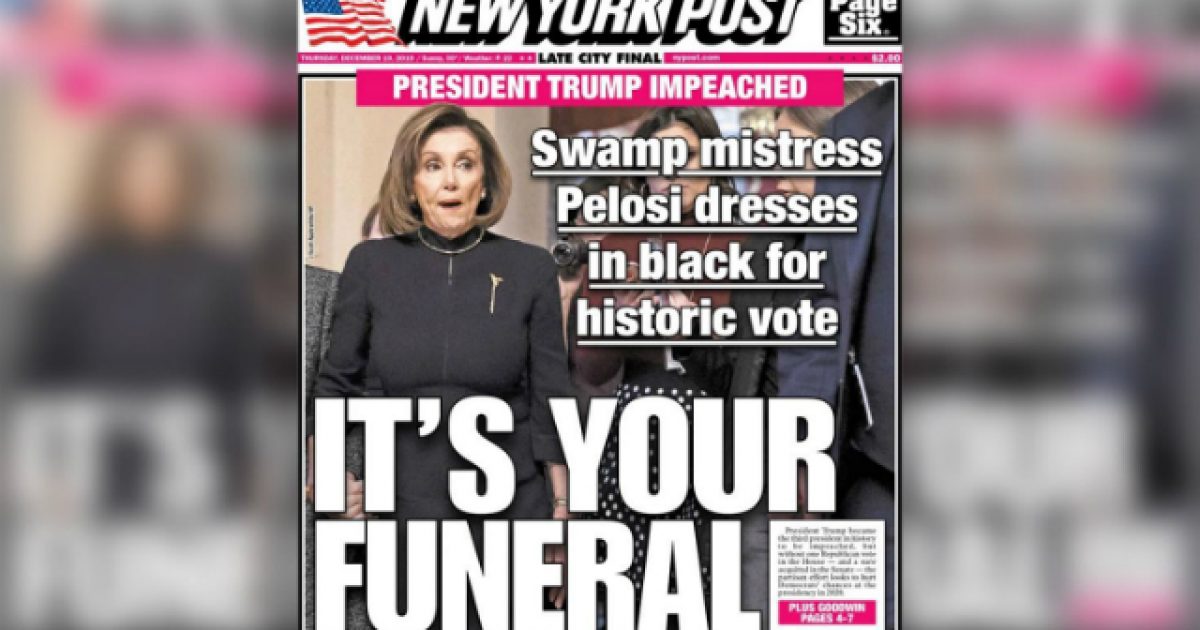 The New York Post is not at all shy about letting their feelings about House Speaker Nancy Pelosi and her impeachment efforts against President Trump be fully known, going so far as to label her a “swamp mistress” on the front page of their newspaper.

The publication made it clear in no uncertain terms that Democrats would ultimately regret pursuing this course of action against Trump, noting that it would backfire on them during the 2020 election.

The tabloid put the news of President Trump’s impeachment along the top of the front page before declaring “Swamp mistress Pelosi dresses in black for historic vote,” with the message, “It’s your funeral.”

“It is said there are two things you should never watch being made: sausage and government budgets,” Goodwin wrote. “Now we can add impeachment to the list of stomach-turning sights to avoid.”

Goodwin wrote that “the nausea meter hit the roof when Nancy Pelosi took the microphone” sporting a “funereal black dress” to recite the Pledge of Allegiance.

“I would have counted her more honest if she had pledged her allegiance to a Democratic donkey,” Goodwin wrote. “As the leader of a party that has marinated its mind in unadulterated hatred of President Trump, Pelosi bears unique responsibility for this calamity. She could have stopped it.”

Goodwin went on to slam the news coverage of the impeachment proceedings stating it, “resembled Grade B actors performing for the cameras, their rehearsed references to oaths, prayers, the Founding Fathers, the rule of law, checks and balances and the Constitution itself all sounding contrived.”

“That was consistent with Pelosi’s latest demand that her members stay ‘solemn’ in public, so as not to give the impression that they were gloating and joyful. In other words, hide how you really feel so we can fool more people into joining us,” Goodwin wrote. “Only the damage to America is real.”

Seems that not everyone is jumping up and down about the “success” that Pelosi is having with her impeachment movement. Guess we’ll just have to wait and see if Goodwin’s prediction of disaster for the Democratic Party comes true as 2020 marches forward.