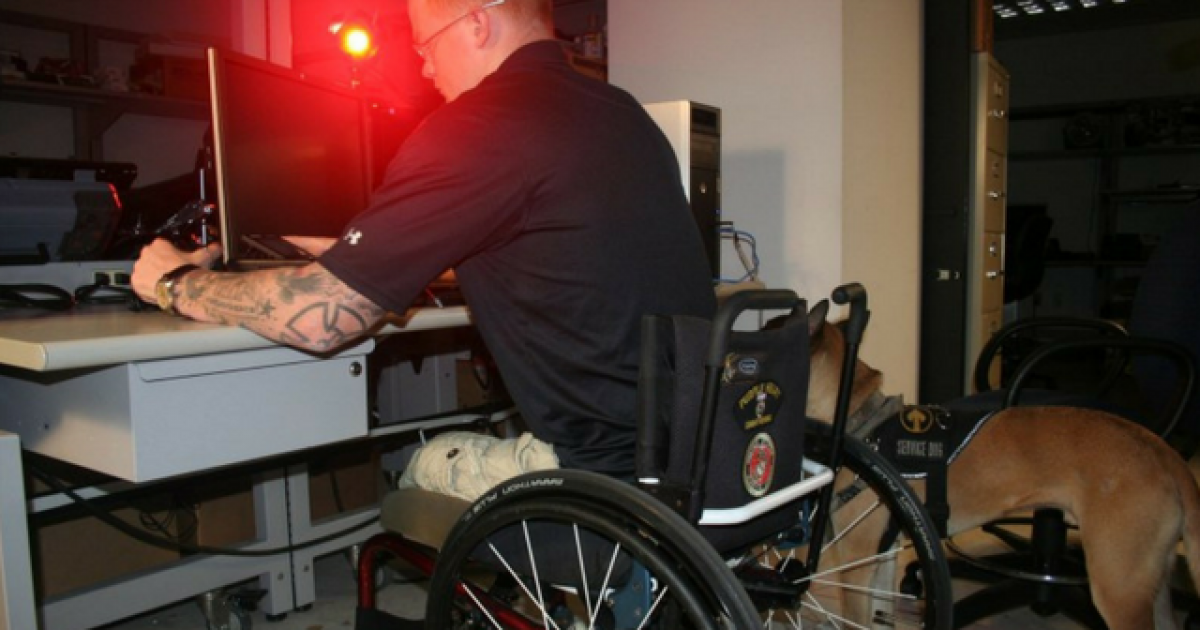 This story would be hilarious if it weren’t so indicative of just how far gone our inability to control the spread of information has gotten.

Who in their right mind would accuse a wheelchair-bound, combat-wounded veteran Marine who works with abused children of being a Nazi?

You guessed it–a hysterical left-wing journalist. And a professional fact-checker, at that.

Talia Lavin, a Harvard-graduate fact checker for The New Yorker, recently got herself in some hot water when she commented on a picture ICE had posted of the aforementioned combat veteran, Justin Gaertner, who now happens to work for ICE, helping them to protect children from online sexual exploitation.

Could this guy possibly be more of a hero?

Well, according to the left, no, he’s a Nazi, and, in their apparent search to bolster this claim, they scrutinized the image, seemingly finding stone-cold proof of his white supremacist ties: an Iron Cross tattoo.

Lavin, clearly putting her fact-checking skills aside as soon as she saw the word “ICE”, jumped right on the bandwagon and tweeted out the picture of the ICE agent with a Nazi tattoo!!

“Lavin, the professional fact-checker, rushed to judgment,” explains Michelle Malkin in a piece for National Review. “She abused her platform. Amid the national media hysteria over President Donald Trump’s border-enforcement policies, Lavin derided a photo of Gaertner shared by ICE, which had spotlighted his work rescuing abused children. Scrutinizing his tattoos, she claimed an image on his left elbow was an Iron Cross — a symbol of valor commonly and erroneously linked to Nazis.”

The meme spread like social-media tuberculosis: Look! The jackboots at ICE who hate children and families employ a real-life white supremacist.

Only it wasn’t an Iron Cross. It was a Maltese Cross, the symbol of double amputee Gaertner’s platoon in Afghanistan, Titan 2. He lost both legs during an IED-clearing mission and earned the Navy and Marine Corps Achievement Medal with Combat Valor and the Purple Heart before joining ICE to combat online child exploitation.

When actual military veterans, whom Lavin failed to consult before defaming Gaertner so glibly, pointed out that the image looked more like a Maltese Cross, Lavin deleted her original tweet “so as not to spread misinformation.”

Too damned late. The harm to Gaertner’s name and honor is irreparable and cannot be unseen, unread, or unpublished.

But this is one of the most severe dangers of social media. Like the multiple images of young children who, it turned out, had not been separated from their parents at the border, Gaetner will still most likely be associated with Nazism in the minds of the left, many of whom most likely missed the memo that it was not, in fact, a Nazi tattoo.

This is how lies spread. The sensationalistic claim always gets more attention than the boring, properly fact-checked reality.

But there’s an important lesson here for the left, as well. Lavin ended up resigning from her job, but not before whining for being called out for her disinfo.

“This has been a wild and difficult week,” Lavin wrote, according to The Blaze. “I owe ICE agent Justin Gaertner a sincere apology for spreading [a] rumor about his tattoo. However, I do not think it is acceptable for a federal agency to target a private citizen for a good faith, hastily rectified error.”

This would be a fair point, if this private citizen had not targeted a man who lost his legs fighting for her freedom and now spends his days protecting children from child predators only to be unfairly demonized because he works for the agency enforcing laws the left wants to see abolished. Both she and Gaertner are victims of something much bigger than themselves: an era in which the truth is valued far less than the reach of your claims.