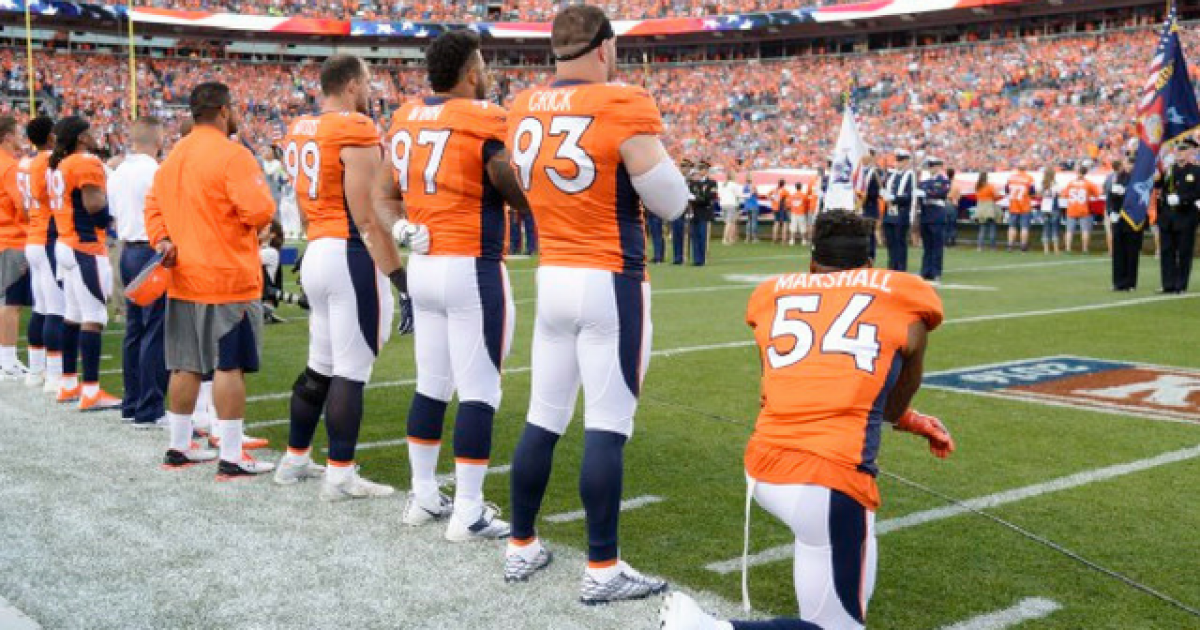 After two years of controversy surrounding players defiantly kneeling during the playing of the National Anthem at NFL games, the league has finally made an official decision about the controversial form of protests. And it just might be the best thing that’s happened to those trying to make a statement–though they’ve yet to realize it.

Last season, ticket sales, viewership, and public enthusiasm for the NFL plummeted as players mimicked former 49er quarterback Colin Kaepernick’s controversial method of protest against the national anthem–kneeling as it was played in the stadium before games.

Apparently, this season, the backlash has caught up with the football league and they’ve decided to put an end to the unpopular demonstration from players–but players are not happy.

The Washington Times has the story:

NFL owners stood up Wednesday to the kneelers, voting to ban on-field protests during the national anthem after two years of social justice activism, fan outrage and flagging viewership — but that doesn’t mean game over.

The NFL Players Association blasted the policy change, warning that it would challenge any aspect “inconsistent with the collective-bargaining agreement,” while the decision was decried by others as an infringement of the players’ free speech rights.

Philadelphia Eagles defensive end Chris Long accused the league of bowing to President Trump, who whipped up opposition last year to the take-a-knee protests, adding that the owners “don’t love America more than the players.”

“This is fear of a diminished bottom line,” Mr. Long said in a statement. “It’s also fear of a president turning his base against a corporation. This is not patriotism. Don’t get it confused.”

For NFL Commissioner Roger Goodell and owners, however, the decision struck a balance between respecting the views of players who object to standing for “The Star-Spangled Banner” and those offended by athletes using the anthem ceremony to further a political agenda.

Trump stoked the fires of outrage at the league last year in a series of–in typical Trumpian style–tweets accusing the players and the NFL of being un-American. Following his comments, however, dozens of players joined in the demonstration, angering fans, some of whom took to social media to burn their NFL jerseys and other fan gear.

NFL leadership and TV executives alike are now clearly determined to rev up ratings, which had dropped following the revived kneeling protests, but it’s unclear yet if it will have an actual impact.

Dave Whitley of the Orlando Sentinel says that while the league’s decision is unpopular among the players who wanted to protest, they’re actually doing both fans and would-be kneelers alike a big favor:

“Most NFL players won’t realize it, but the owners did them a favor on Wednesday. It gets back to a simple rule of persuasion,” he explains. “Don’t start your argument by insulting half your audience.”

“Players can still make stands or take knees. They just won’t be allowed to do it in front of fans that paid to watch a football game, not a political protest,” he continues. “Some of those fans might be more sympathetic to the protesters’ concerns. Players might not realize it, but spitting on something people hold dear is no way to win them over.”

And this is the ultimate bottom line. It’s hard to say if this will actually work to boost fan interest and ratings for the league, but if these players had never chosen a method of protest in the first place that insulted the deeply-held values of so many fans, fans who would otherwise in no way be unsympathetic to their cause, they wouldn’t be in this position in the first place.

“This Is A Town That Wants Thoughts and Prayers”: Why the Santa Fe Shooting Isn’t Working for the Anti-Gun Left

‘National Teacher Of The Year’ Makes Call For Violence Against McConnell

A man who was named the “National Teacher of the Year” back in 2019 by the Council of Chief State School Officers recently tweeted that Senate Majority Leader Mitch McConnell’s neighbors should rip a page out of the playbook the neighbor who assaulted Sen. Rand Paul and violently attack McConnell. According to Rodney Robinson this would make such an individual a “true Kentucky hero.” The neighbor who assaulted Sen. Paul left him with six broken ribs which made it necessary for doctors to remove a part of his lung. Robinson tweeted, “Who are Mitch McConnell’s neighbors? I’m just saying Rand Paul’s neighbor did what a true Kentucky hero should do. It’s your turn to step up.” https://twitter.com/KyleKashuv/status/1344435826688745474 via Daily Wire: Paul’s wife Kelly Ashby Paul issued a fiery response, tweeting, “I am so disgusted by this I have no words. The 2019 ‘National teacher of the Year’ is celebrating the violent assault on my husband that resulted in 6 broken ribs and part of his lung being removed. This hateful thug is calling for more violence on Sen McConnell.” Robinson eventually deleted the tweet and posted a response to the backlash, which he blamed on “conservative bots“: “I made a Mitch McConnell joke today and the conservative bots are real angry. It’s funny because the joke was made early today and no one said a thing until I promoted black medical awareness.” When he was awarded Teacher of the Year in 2019, the Council of Chief State School Officers said of Robinson, “He creates a positive school culture by empowering his students – many of whom have experienced trauma – to become civically minded social advocates who use their skills and voices to affect physical and policy changes at their school and in their communities,” CNN noted. Notice how after…