At a time when it seems like loving your country and desiring to show respect to the flag and to the men and women who have sacrificed their lives to protect our liberty is coming more and more under attack, it’s refreshing, especially in the NFL, to see a professional athlete show his pride for the nation he calls home.

This is exactly what Philadelphia Eagles quarterback Carson Wentz did when he posted a picture on Memorial Day to honor the memory of soldiers who have died in order to preserve our American way of life, showcasing his gratitude for what these amazing people gave for our rights.

What makes this photo so special is that it shows Wentz standing for the National Anthem, something that many NFL players frown upon as they take knees during the song as some sort of protest against racial inequality. Or so they claim. 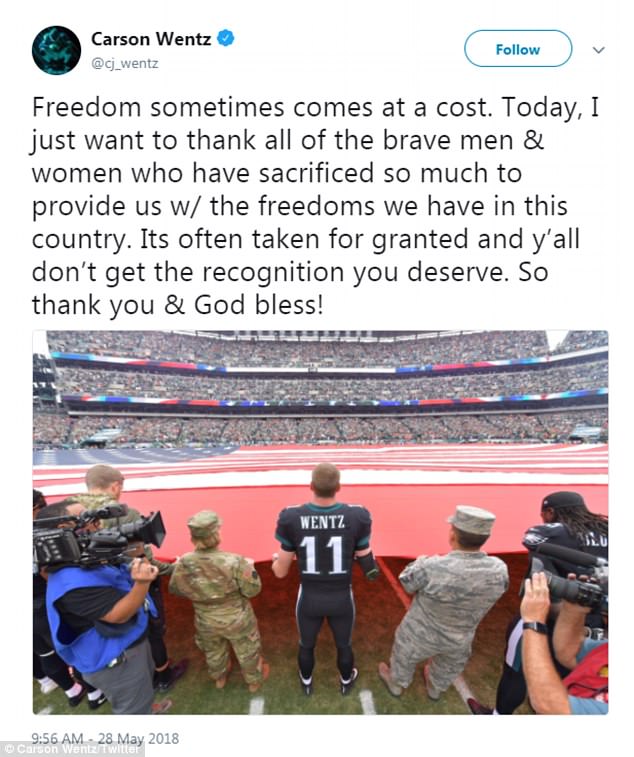 The photo, which shows Wentz holding the edge of an American flag between two soldiers, comes after the NFL announced its decision to punish teams whose players knelt in protest during the playing of The Star Spangled Banner.

‘Freedom sometimes comes at a cost,’ he wrote in the tweet. ‘Today, I just want to thank all of the brave men & women who have sacrificed so much to provide us w/ the freedoms we have in this country.

‘Its often taken for granted and y’all don’t get the recognition you deserve. So thank you & God bless!’

‘Personally, I don’t view it (this way), I know some people do, but I don’t view it as a political thing whatsoever. I don’t mess with politics very often, but I will be involved in going to that,’ Wentz said on Tuesday.

He added: ‘For me personally, if the team decides as a whole, most guys want to go and be a part of it, I will be attending with them. I think it’s just a cool way to receive the honor, kind of nationally and be recognized.’

This guy is a real class act, the type of individual the NFL could use a lot more of, as their ranks are becoming increasingly filled with folks who aren’t in the game to be the best, but to use their platform for some sort of social cause.

There’s nothing wrong with using a large platform to draw attention to things you believe in, however, there’s a right way and wrong way to protest. Disrespecting the flag, the anthem, the country, and by extension it’s fallen heroes, yeah that’s the wrong way.