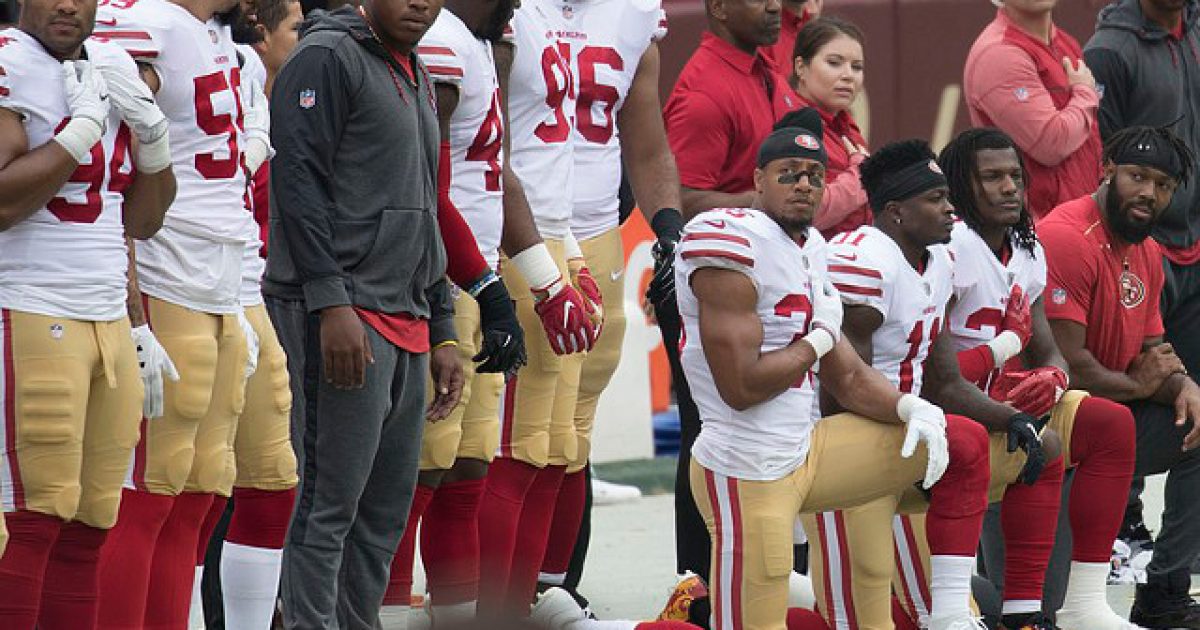 The NFL season kicked off on Sunday, and, as usual, it was filled with spoiled rotten professional athletes taking a knee during the National Anthem, again, despite the National Football League acting as if they were going to put a stop to this stuff this year.

Turns out that policy they made over the offseason was nothing more than talk, as they’ve stated they aren’t going to enforce the rule this season. This isn’t likely to surprise most fans who probably figured nothing would be done.

Miami Dolphins wide receivers Kenny Stills and Albert Wilson were the first players of the 2018 regular season to take a knee during the playing of the national anthem before the game. Dolphins defensive end Robert Quinn raised a fist into the air, while in San Francisco 49ers, wide receiver Marquise Goodwin did the same thing.

And the protests will continue, as the NFL is “not expected to implement a new policy on the national anthem this season,” league sources told ESPN.

The new policy is going to be no policy — at least for this season, according to sources.

Too many people have stances too strong to figure out a compromise, but an NFL official insisted Sunday morning that there is continuing dialogue on the topic as the league looks for ways to address social justice issues.

Players began sitting or kneeling during the anthem in 2016 to protest racial inequality, police brutality and other issues. The protests have become a divisive topic of debate, and the NFL and players’ union still haven’t said whether players will be punished this season if they choose to kneel or demonstrate during the anthem.

President Trump has taken a deep interest in this particular issue ever since he took office, and as such, wasted no time in addressing the start of the new season on Twitter.

“Wow, NFL first game ratings are way down over an already really bad last year comparison. Viewership declined 13%, the lowest in over a decade. If the players stood proudly for our Flag and Anthem, and it is all shown on broadcast, maybe ratings could come back? Otherwise worse!” Trump wrote on Twitter.

Wow, NFL first game ratings are way down over an already really bad last year comparison. Viewership declined 13%, the lowest in over a decade. If the players stood proudly for our Flag and Anthem, and it is all shown on broadcast, maybe ratings could come back? Otherwise worse!

The question that seems to be on a lot of folks’ minds is what, exactly, do these players hope to accomplish by their actions. Is anyone’s mind and heart being changed? What is the reform they want to see, specifically? Does anyone really know what this is about?

Seems like it’s just a ploy for players to look hip and cool, to be “woke” and be part of the “in crowd.” It’s a movement that, as of now, lacks any real substance. It’s the politicization of football with no discernible goal in mind.

Trump Continues to Shrink the EPA, But Not the Way You Probably Think