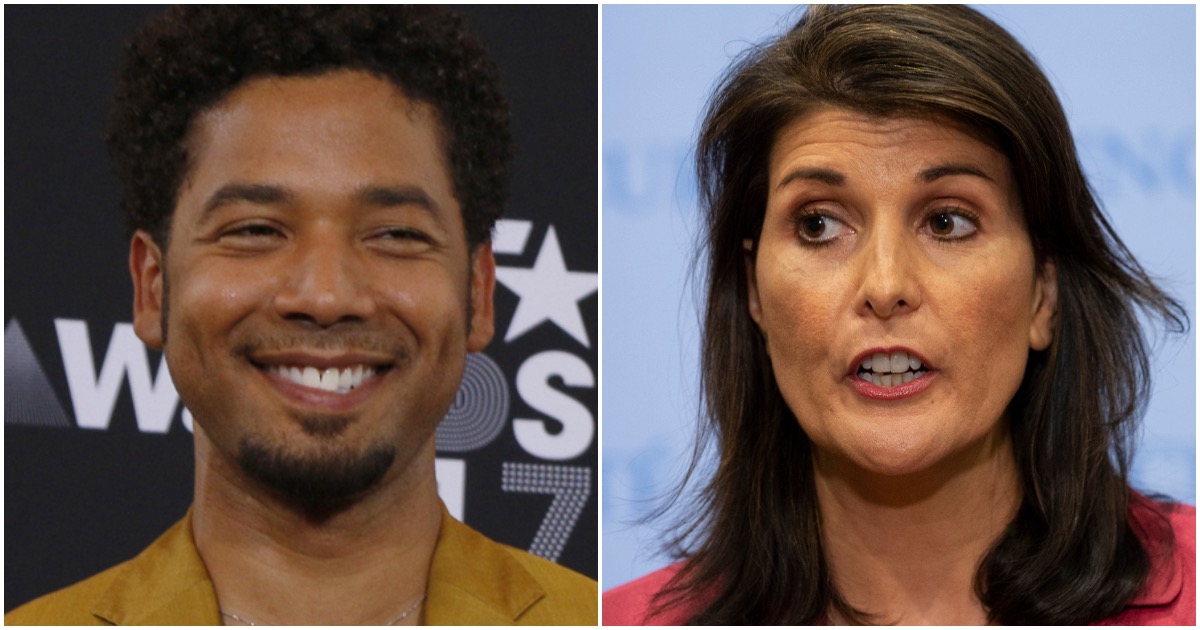 Nikki Haley unloaded on hate crime hoaxer Jussie Smollett and the mainstream media, noting how they got played.

She wants Jussie held accountable for his recklessness.

rude, Trashy queso.
As big as this story was in the news, someone had to say it. Thanks, @NikkiHaley

I agree that Smollet played the media & much of the the public as fools which they certainly are. They have been acting like fools or maybe better described as
co-conspirators with the Democratiic anti-Trump at any cost movement.

And the media swallowed the bait and ran with the story, heck they could discredit Trump and conservatives in general,Lol I knew the story wasnt true from the start.

It’s very easy to play someone for a fool when they are willing. #media

You are so right.True victims will be the ones most affected by his actions..but so will the marketing media.A truly free press needs to have credibility and trust. It’s sad Smollett knew the media would give all the publicity and marketing needed to perpetuate this hoax. Telling

The media wanted it to be true. That’s the problem.

He says what the Empire actor did is a “slap in the face.”

A Los Angeles-based civil rights activist held a press conference Sunday, calling for the arrest of actor Jussie Smollett and saying he believes the “Empire” star lied about being a victim of a hate crime.

When a story doesn’t go the way lefties want, it still doesn’t matter. They wind up blaming Trump and Republicans, regardless.

Appearing on The Late Show with Stephen Colbert last month, the actress took particular aim at Pence over his long-held opposition to same-sex marriage.

“The vice president of America wishes I didn’t have the love with my wife,” Ellen Page explained. “If you are in a position of power and you hate people, and you want to cause suffering to them, you go through the trouble, you spend your career trying to cause suffering, what do you think is going to happen? Kids are going to be abused and they’re going to kill themselves, and people are going to be beaten on the street.”

Smollett thought he’d get away with staging a hate crime.

NEVER FORGET: Bernie Was Asked to Leave Hippie Commune for Refusing to Work