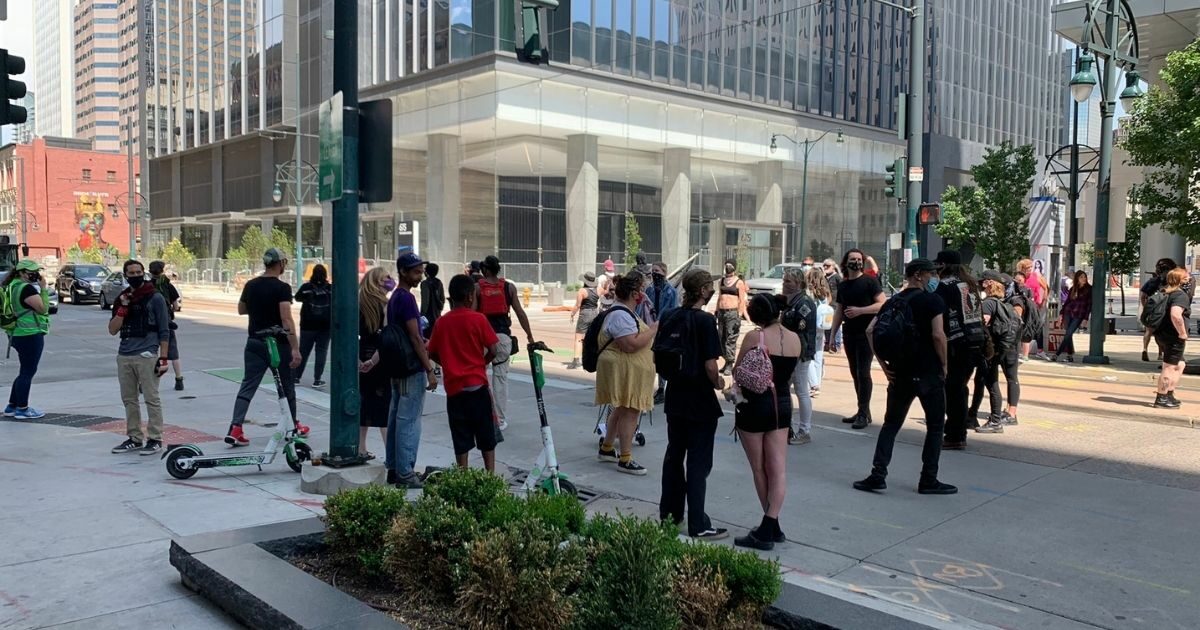 When the Colorado Christian University Centennial Institute’s Western Conservative Summit came to Denver this weekend, so did antifa. Not that the media noticed.

Westword — an alternative paper which bills itself as “[t]he independent voice of Denver since 1977” — reported on the counter-protest, the “Western BLM-Antifa Summit,” which promised “two days of fiercely jubilant opposition to the Western Conservative Summit!”

Yet, the Denver Post — under a write-up of Andy Ngô, natch, whom the newspaper called a “controversial conservative journalist” whose work consists of “‘unmask[ing]’ activists he believes are members of antifa, a loosely organized and sometimes violent left-wing group” — reported that “no protesters were spotted inside or outside Saturday.”

The Denver Post didn’t bother looking around about what happened on Friday, when antifa threatened journalists covering the conference — which included speakers like Ngô, former Sen. Rick Santorum, Rep. Lauren Boebert and pro-life activist Lila Rose, among others. Which is a shame, because there was plenty of video from the Washington Examiner’s Tiana Lowe, one of the reporters they harassed.

This was when things were a bit more peaceful — at least by the standards of antifa, that is.

Antifa protesting the Western Conservative Summit in downtown Denver, chanting “hey hey, ho ho, this capitalist scum has got to go” and “Hyatt cash is Nazi trash.” (Hyatt is hosting the summit.) pic.twitter.com/PPBbrMyC10

Antifa members were willing to talk to Lowe and another Washington Examiner reporter — at first.

“They’re known Nazi sympathizers,” one antifa member named Leonne said. “They sit at the tables with people like Proud Boys.”

Then things got a bit problematic, according to Lowe’s account, saying that “tensions quickly rose when they identified our lanyards, which bore the summit logo.

“We noted, as our press passes proved, that we were covering the summit as journalists, not attending,” she wrote in the Saturday piece. “That made the situation worse, as evidently, antifa members, these noble defenders of democracy, regard the press with the same disdain as they do partisans whose politics they oppose.

“The group began to take fault with this journalist filming the protest, which occurred on a public street in the heart of downtown. Leonne warned me that my phone would get smashed.”

“This is not a threat,” Leonne reportedly told Lowe. “But I am warning you what will happen.”

Ngô, filming across the street, captured what appeared to be a confrontation between Lowe and antifa members, although it was unclear whether this was on Friday or Saturday:

Denver: @TianaTheFirst was stalked and harassed by antifa at their protest outside the @CentennialCCU Western Conservative Conference. The antifa shut down the street and confronted drivers. They didn’t want Tiana filming. pic.twitter.com/Tn8qPm56bk

There were plenty of other tweets from Lowe on both Friday and Saturday.

WARNING: The following tweets and videos contain graphic language and violence that some viewers will find offensive.

To be clear, I identified myself as a journalist, not an attendee of the conference, and they’re protesting on a public street

Those white and green lights self-identified members of Antifa are flashing at me? They’re intended to break my phone’s camera and blind me by burning my retinas. I do have a mild headache, but I stayed mostly safe by leaving after men told me they would break my phone or else pic.twitter.com/NhKbHHlck2

Video of Antifa closing down the entire block. Staffers at the hotel across the street are rightly annoyed. pic.twitter.com/TgHklLfYLB

Antifa members are now banging the windows of the Denver Hyatt hosting the Western Conservative Summit. No sign of the cops on this side of the building. pic.twitter.com/uyh0crSh1p

Antifa violently confronted a purported attendee of the Western Conservative Conference in downtown Denver. The antifa gathered & waited for attendees who were leaving the Hyatt Regency. (I am speaking there.) Video by @ElijahSchaffer: pic.twitter.com/m2tBMPjDri

DENVER: antifa command hotel guests sympathetic w/ their cause to “pee on the floor” of the hotel because they “host Nazi’s”

These are the people MSNBC called heroic pic.twitter.com/DjFqbIBEbo

The Denver Post couldn’t find any of this, though. Quelle surprise!

In her Saturday column, Lowe didn’t sound particularly perturbed by this, describing herself as “just a journalist who walked outside of the place she was covering to find dinner, only to find yet another American city occupied by brats who have never heard the word ‘no.'” However, she noted an interesting dichotomy in how antifa is covered by the media and what they think of the media.

“Antifa does not operate in the paradigm of classically liberal politics, and those journalists running cover from antifa in order to avoid being distracted from QAnon crazies and alt-right lunatics would realize that the rioters loathe them as much as any reporter aligned with the Right or the center, if only they ventured to cover ‘mostly’ peaceful protests,” Lowe wrote.

“As evidenced by the 10 police officers in riot gear holding court at the entrance of the Hyatt and then forced into a standoff with them, antifa has very little interest in the virtues of open discourse and peaceful assembly, and until those on the side of liberalism reject the yoke of its terrorism, our cities will continue to be held hostage.”

But then, the media’s reliably been telling me that antifa are actually “anti-fascists.” And if I’m an anti-anti-fascist, what does that make me? Who are you going to believe — our sainted media or your lying eyes?