There’s sympathy, and then there’s carrying emotions too far. The latter would be the case of Florida resident Laurence Key, who was arrested Tuesday for allegedly threatening to murder the children of Rep. Brian Mast, R-Fla. The flashpoint for Key was President Trump’s immigration policies, the TC Palm reports.

“I’m going to find the congressman’s kids and kill them,” he told an intern who took the call. “If you are going to separate kids at the border, I’m going to kill his kids. Don’t try to find me because you won’t.”

Apparently, he was mistaken. The paper adds:

Key is charged with communication of a threat to kidnap or injure a person in regard to Mast’s children, a girl and two boys younger than 8.

Key told an FBI investigator and Martin County sheriff’s deputy he never threatened to kill Mast’s children, but admitted he said “Mast should be separated from his kids” if he supported the Trump administration policy, the federal complaint says.

Key is scheduled to be arraigned on July 2.

Key denied threatening to kill Mast’s children, according to an FBI investigator who interviewed him. But Key admitted to saying that Mast and his children should be separated from each other.

While Key is responsible for his own actions, Trump-haters across the board bear the brunt of the responsibility for creating the current climate of hate. Among this motley crew are members of the so-called mainstream media, Hollywood leftists like Peter Fonda, lawmakers like Nancy Pelosi, and former CIA Director Michael Hayden. 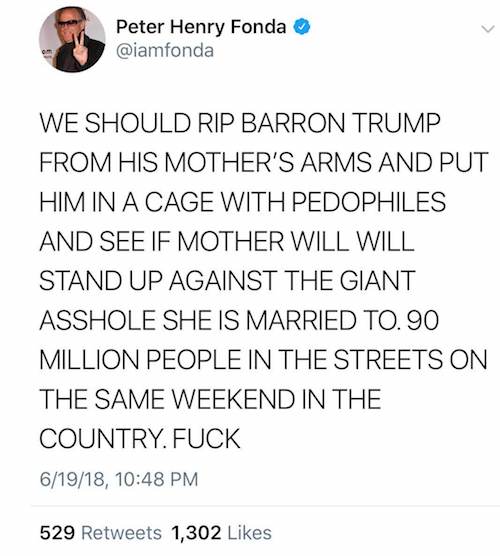 If the media keeps this up — if they keep up generating this hysteria — somebody’s gonna get killed. I think we’re pretty close to somebody getting killed already, and I’m not being hyperbolic, and I’m not trying to call attention to myself.”