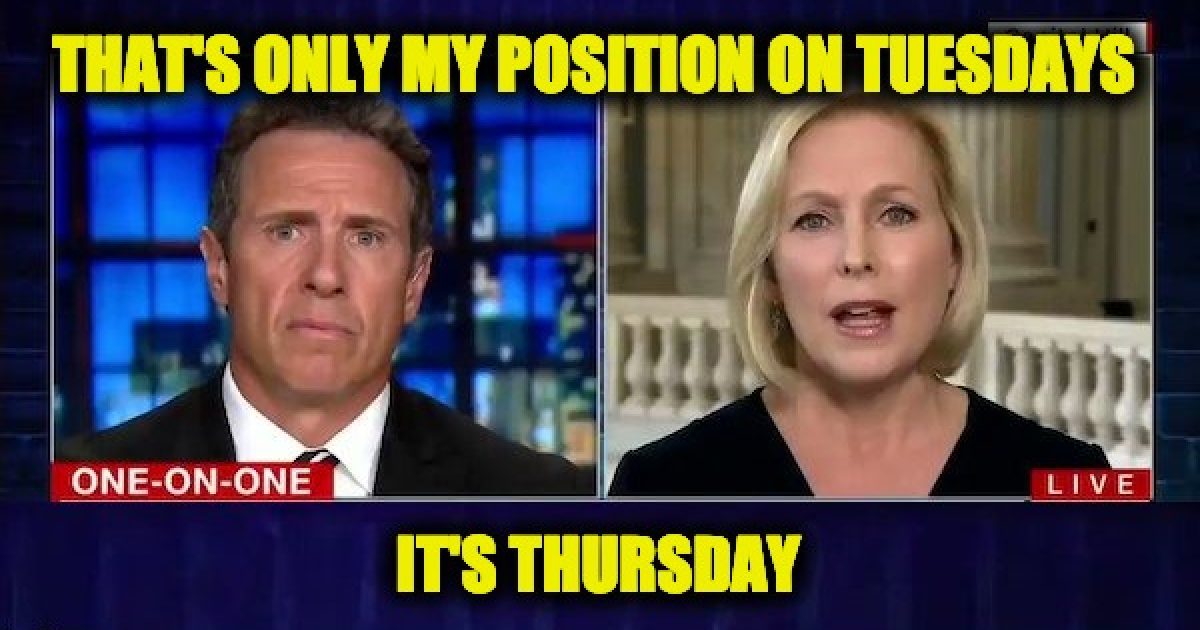 [This article originally appeared at Lidblog.com and is reprinted with permission.]

When NY Senator/Presidential candidate Kirsten Gillibrand was appointed to the U.S. Senate, Hispanics went nuts because she was so anti-illegal immigration. Now the political hack is talking about tearing down the existing border barriers.

On Thursday, Twitchy said that Democrat White House hopeful Beto O’Rourke told MSNBC’s Chris Hayes that he would tear down the parts of the border wall already up and in place.  Sensing that stance would be popular with the extreme leftists Sen.Gillibrand one of what seems like the thousand Democrats considering a run for the White House in 2020, said she could support O’Rourke’s call to tear down existing barriers.

If there was ever any doubt that Democrats support open borders, this should remove them.

“I’d have to ask folks in that part of the country to see whether the fencing that exists today is helpful or unhelpful,” she told Fox News.  “I could look at it and see which part he means and why, and if it makes sense, I could support it.”

O’Rourke, who’s seriously mulling a White House bid of his own, said Thursday in an interview with NBC News that he’d “absolutely … take the wall down,” referring to the barrier by El Paso, Texas.

O’Rourke, who came close to upsetting GOP Sen. Ted Cruz in last November’s Senate election in Texas, argued that the existing 600 miles of wall and fencing along the 2,000-mile border have “not in any demonstrable way made us safer.”

Quite an agenda for the Democrats, wouldn’t you say?

While speaking in New Hampshire, Gillibrand also claimed the border crisis is “manufactured.”  In other words, she thinks it’s all FAKE!

“I think the only national emergency is the humanitarian crisis that President Trump has created at our border by separating families from children and treating people who need our help inhumanely. I think this is manufactured, I think this [is] inappropriate,” she said.

Odd, we don’t recall her angst when Obama separated families at the border…

Here’s the strange part, before she advocated open borders she was strongly opposed to illegal immigration.

In Jan 2009 when she was appointed to take over for Hillary, the NY Times wrote:

During her one term in the House of Representatives, from a largely rural, traditionally Republican district, Kirsten E. Gillibrand was on safe political ground adopting a tough stance against illegal immigration.

Ms. Gillibrand, a Democrat, opposed any sort of amnesty for illegal immigrants, supported deputizing local law enforcement officers to enforce federal immigration laws, spoke out against Gov. Eliot Spitzer’s proposal to allow illegal immigrants to have driver’s licenses and sought to make English the official language of the United States.

Even New York Assemblyman Peter Rivera, a fellow Democrat and  the senior Hispanic in the state legislature, issued a statement condemning Gillibrand for among other things, wanting to “use local police to enforce federal immigration law, against the advice of state law enforcement groups,” and supporting “more walls and guards on our southern border.”

She wanted more walls, but since then the direction of the winds shifted, the Democrats became the no borders party, and the spineless Gillibrand changed her stance.

How high does the body count have to get before she recognizes that a problem exists? A body count doesn’t really matter to the NY Senator, Gillibrand is a political hack who changes her positions whenever the wind direction changes.