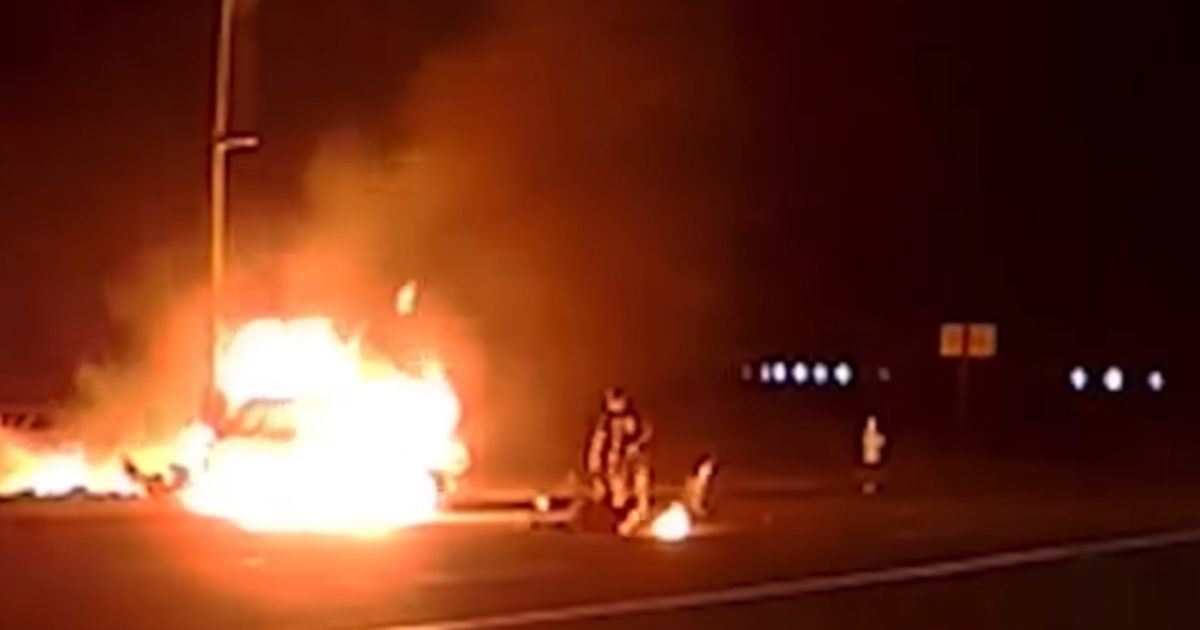 Many people become first responders because helping others is something that deeply aligns with their character. The job title is just the official way of identifying the fact that they are ready to jump into dangerous situations to help people.

For those individuals, there really is no “off the clock” time, as they’re always prepared to respond first.

Officer Mark Afanasev with the Stockton Police Department is one of those people. He and his wife were out on Saturday in Rancho Cordova, California, when they witnessed a horrific car accident.

One of the cars involved swerved into a pole and immediately erupted in a ball of fire, and like a true hero, Afanasev drove toward it, told his wife to call 911 and charged toward the blaze.

“I realized that we had to go there to help them because there was nobody else around,” he later told KCRA-TV.

One of the people in the car, a man, was able to get out of the car on his own, but was on fire as he exited the vehicle.

A woman was also in the car but had not been able to get out, so Afanasev quickly escorted her out and away from the flames.

“Here is the video from last night for those that wanted to see it!” Mark’s wife Anna posted on Facebook. “It may be disturbing for some people (guy was on fire) so just be be aware!”

The Afanasevs were stopped at a traffic light that was taking longer than usual due to a recent retiming — which Mark mentioned in the video. Had it not been for that extra little bit of time they waited in the intersection, they might have passed before the accident took place and been unable to help.

“I feel like God put us in that position for a specific reason,” Mark acknowledged. “This is something that is just part of me to help somebody out, especially in something like this, where I’m the only one there.”

Anna echoed the belief that they were there providentially.

“We definitely believe He had greater plans for us being there for an abnormally long period of time!” she commented on her post.

According to another one of her comments, the man suffered some burns and injured his arm, but “was responsive and conscious.” She also said that her husband “is not one to seek attention or even tell anyone about this but I couldn’t help but share because I saw a different side of him yesterday and it made me appreciate him and his heart so much more!”

Miraculously, no one died in the accident even though the other car flipped several times. Many are calling Mark a hero now, and his actions are receiving widespread commendation.

“On the evening of Saturday, July 17th 2021, off duty Stockton Police Officer Mark Afanasev and his wife were driving when they witnessed a fiery accident,” a Facebook post by the Support Stockton Police Foundation read.

“I mean every single officer that I know of, every law enforcement officer, every firefighter, every paramedic would have done the exact same thing that I did, given those circumstances, if they were in that position,” Mark argued, “they would do the exact same thing.”

The officer is denying any claim to the “hero” title, but perhaps that’s just because helping people is in his nature.

Watch: Biden Babbles About 'Aliens' and a 'Man on the Moon' When Asked About Black Vaccine Hesitancy