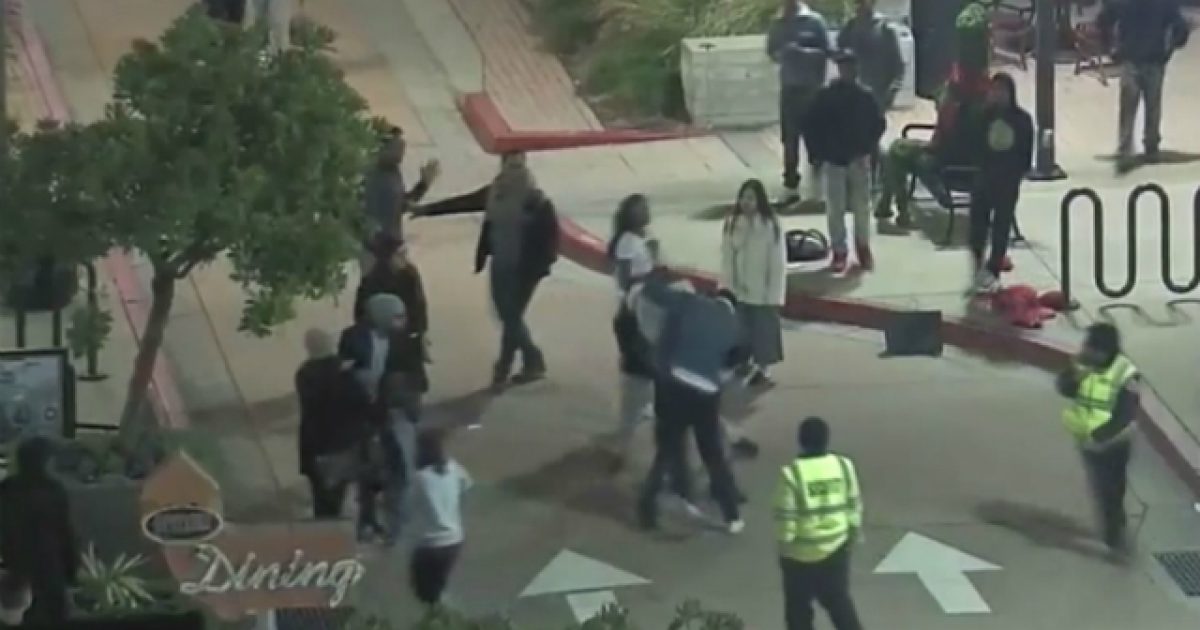 A California off-duty police officer was attacked by a mob of teenagers at an outdoor shopping center after helping a woman who claimed her phone was stolen during Black Friday.

The assault was captured on video.

The assault – which was captured on video – happened around 8 p.m. at the Bay Street Mall in Emeryville, located next to Oakland. The Emeryville Police Department said Monday a woman seen in surveillance video wearing white clothes approached a group of teenagers and accused them of taking her cellphone minutes earlier.

“She confronted them asking for her phone back. During the confrontation, the juveniles got aggressive with the victim and began to assault the victim,” Emeryville Police Detective Jaime Pardo told reporters.

After spotting the commotion, a California Highway Patrol officer – who asked to only be identified as Greg B. – approached the group and tried to secretly take photos until one of the girls in the crowd noticed what he was doing.

“The group then turned toward him and became violent with him,” Pardo said.

The video was released by law enforcement officers on Monday and shows a teenager running toward the off-duty officer and hitting him. A second boy then comes and punches him and runs off until the officer is surrounded and attacked again. A security guard gets knocked down in the video while attempting to respond to the mob.

The officer stated that he tried to run away but got surrounded by the teenagers.

Greg B. sustained a concussion, a broken finger, and several bruises after the assault. He went on to say this is the third time he’s had to help someone at this particular shopping center.

“I think this just came down to me not being able to look away and let this happen,” he said in an interview with KTVU. “I saw this young lady and she was going to be in a very bad situation.”

The Emeryville Police Department said that two juveniles, ages 14 and 16, have been arrested and six others are being sought.