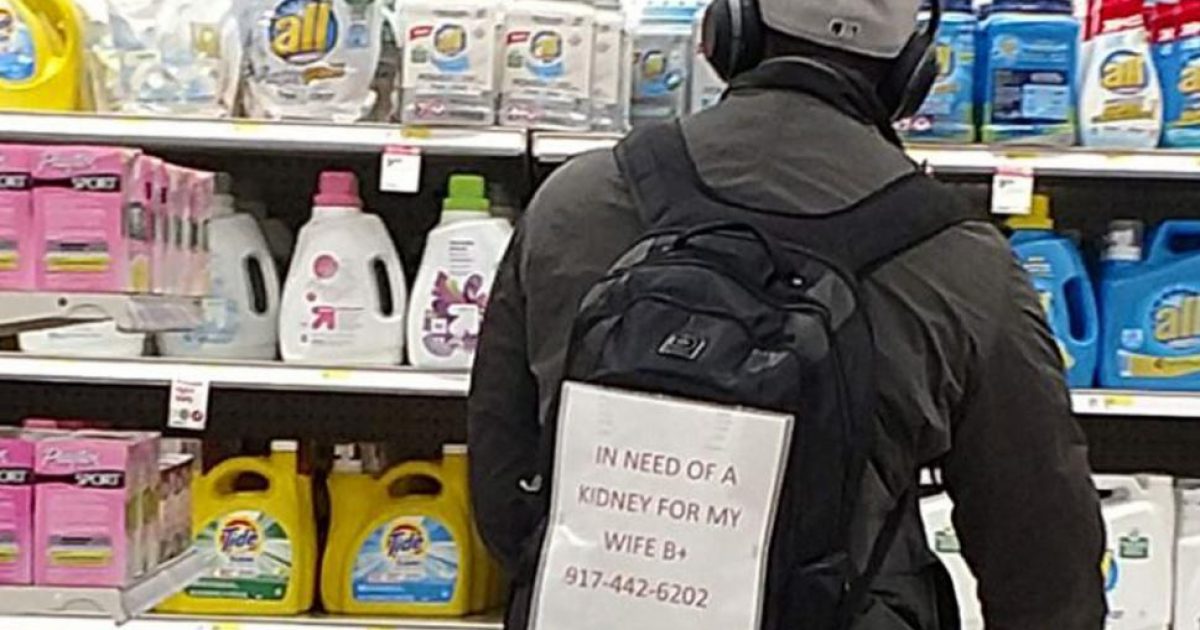 When Raymond and Mylen Thompson first met online in 2000, it was the beginning of a seemingly ordinary love story. Nothing too epic, just bonding over their shared appreciation for pro wrestling in an AOL chat room.

Not long after, the sweet couple married and had a daughter named Rachel. Together they lived, happy and healthy, in Brooklyn.

Until one day, Raymond recalls, their simple life was derailed and he got the most terrifying phone call of his life. “[Mylen] called me at work and said, ‘Babe, you need to come home right now.’ She said, ‘I can’t feel my right side. It’s numb,’” he told CNN editor Lilit Marcus.

As it turned out, Mylen developed a serious kidney disease and now, Raymond shared, “she goes to a [dialysis] center for three hours, three days a week. There’s a machine that filters your blood. It takes a lot out of you.”

Inspired by stories of people who weren’t afraid to make their need for an organ donation known, Raymond set out on a mission to find Mylen a kidney by wearing a sign on his back.

Then, in late December, Raymond happened to be wearing his sign, which reads, “IN NEED OF A KIDNEY FOR MY WIFE B+” along with his phone number, at his local Target store when he was noticed by someone with an international platform.

Here is a photo I took at my Target yesterday and can’t stop thinking about. pic.twitter.com/gbzF47AqCy

While at Target, Raymond caught the eye of CNN editor Lilit Marcus. Marcus snapped a quick photo of him and shared it via Twitter, saying “[couldn’t] stop thinking about it.”

“Within a few hours, my picture of this man…had gone viral. Celebrities such as Zach Braff, Martina Navratilova and Evan Rachel Wood shared it,” Marcus wrote in an article for CNN about Raymond. “Actress Sarah Hyland, who recently revealed she had a second kidney transplant, shared the image, too.”

“One thing Raymond wants to clear up,” Marcus explained, “is that his family won’t be setting up a GoFundMe for medical expenses — between his work’s insurance and Medicare, they’re covered. It’s just the kidney they need.”

“I had a few people walk up to me and try to give me money,” Raymond shared. “I refuse that every single time.”

Amazingly, Marcus’ effort to put Raymond’s message out to the world has resulted in thousands of contacts from people as far as Pakistan and Australia looking to donate a kidney to Mylen. Now, the Thompsons are beginning to respond to each phone call and, having been flooded with offers, their prospects are looking quite good.

“I appreciate everyone who reaches out. It means a lot to us to get the message out there,” Raymond said, noting that even if going viral achieves the goal of finding a kidney for Mylen, that’s only half the battle. “Sign up to be organ donors. There are so many people that actually need organs, especially kidneys. You have two and can live a healthy life with just one. Just sign up.”

Mother Stunned When Her Son, With the Help of a Stranger, Orchestrates Touching Christmas Surprise