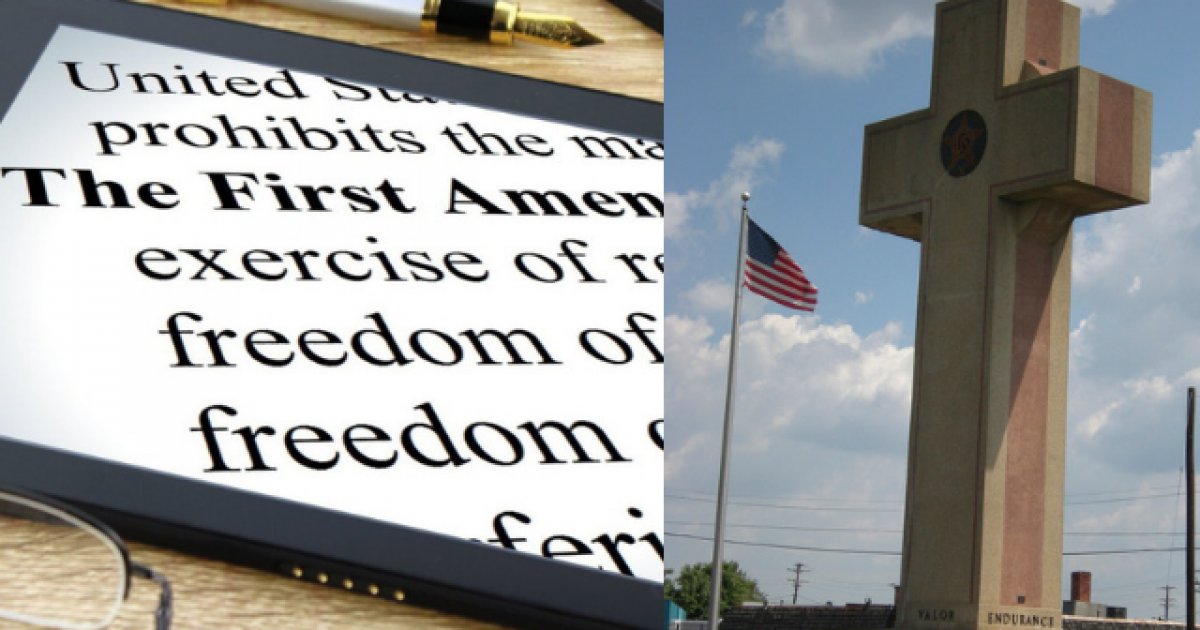 Many, of course, don’t realize this and believe themselves to be the embodiment of the First Amendment when they battle prayer in school or religious monuments on public grounds.

An excellent example is the current supreme court battle over a century-old memorial cross erected in honor of WWI heroes who fought and died to defend our great nation.

“The Bladensburg Cross was built primarily by a group of mothers after World War I who mourned the loss of their sons in the Great War. Forty-nine men from Prince George’s County in Maryland are memorialized on the cross which was built in their honor in 1925,” explains Jerry Newcombe in The Christian Post.

“They mimicked the design of the gravestones that their sons were buried under in Europe,” says Jeremy Dys, Deputy General Counsel of First Liberty Institute,  who spoke with CP. “And so it stood there without any complaint until about five years ago when some atheist groups got together and decided that the presence of that memorial on public property is offensive in violating the Constitution. The Fourth Circuit has agreed with them.”

Is this cross really unconstitutional?

Newcombe has some questions for the humanists, who assert on their website that “…the longer a constitutional violation like this persists, the greater the harm to non-Christian residents forced to encounter the cross year after year.”

“An honest look at our history shows the atheists are the ones out of step with our traditions, as opposed to the 84 percent of Americans who support that cross,” Newcombe explains.

Was the establishment clause violated when:

•The Constitution was signed “in the Year of Our Lord” (as in Jesus)?

•George Washington became the first president under the Constitution, and was sworn in on the Bible, which he leaned over and kissed? Then in his First Inaugural Address in New York City, he mentioned his gratitude to God repeatedly. Then he led the cabinet and the Congressional members and Supreme Court justices over to St. Paul’s Chapel for a two hour Christian worship service, which included communion, in which he also partook.

•The same men who gave us the First Amendment hired chaplains for the military and chaplains for the House and Senate? This practice has been challenged, all the way up to the Supreme Court, but SCOTUS ruled in favor of the chaplains (1983)—since such a practice predated the Constitution itself.

•Jefferson approved and regularly attended the Sunday morning Christian worship services held in the U. S. Capitol building as president? Jefferson even made a suggestion or two on potential preachers for pulpit supply.

•James Madison also regularly attended those services when he was president as well?

These last two facts are significant because if the ACLU and the American Humanist Association and their ilk had patron saints, they would be Jefferson and Madison.

•President Abraham Lincoln called for the annual holiday of Thanksgiving (to God), which we continue to celebrate year after year? He also called for a day of prayer on March 30, 1863, in which he declared: “It is the duty of nations as well as of men to own their dependence upon the overruling power of God . . . and to recognize the sublime truth, announced in the Holy Scriptures and proven by all history, that those nations only are blessed whose God is the Lord.”

•FDR issued copies of the New Testament and the Psalms to servicemen in World War II? He also gave out a Jewish version which had passages from the Old Testament. He wrote:  “As Commander-in-Chief, I take pleasure in commending the reading of the Bible to all who serve in the armed forces of the United States.” I have copy of one of these New Testaments. It was my dad’s, who served in the Navy in World War II.

And on and on.

Newcombe also notes that Joseph Story, a Harvard Law professor and Supreme Court Justice in the early 1800s, wrote extensively on the Constitution and said of the First Amendment that: “An attempt to level all religions, and to make it a matter of state policy to hold all in utter indifference, would have created universal disapprobation, if not universal indignation.”

Our First Amendment protects the religious from interference from the state. It was never meant, nor is it written to convey, the mythical separation of church and state that you will find nowhere in our constitution.

If the Christian faith was good enough to inspire the Founding Fathers to pen the longest-lasting constitution in world history, it’s good enough to honor our fallen heroes, to grace classrooms, football fields, city council meetings, and on and on.

Newcombe closes with a very fitting quite from President Eisenhower, who said in 1955 that, “Without God, there could be no American form of Government, nor an American way of life. Recognition of the Supreme Being is the first—the most basic—expression of Americanism. Thus the founding fathers of America saw it, and thus with God’s help, it will continue to be.”

OPINION: The Green New Deal and the Hegelian Dialectic