When a person claims to be a socialist, what they’re really saying is that they hate poverty — not a bad thing, obviously — and believe that no one should be rich, as wealth should be evenly distributed so that everyone has a piece of the pie.

However, when it comes to practicing these principles in their own personal lives, it turns out the vast majority of socialists are huge hypocrites and closeted capitalists, including the darling of the Democratic Party, Alexandria Ocasio-Cortez, a confessing socialist.

Despite spewing nauseating idealism about economic equality — which doesn’t and will never, exist in the real world, only equality of opportunity — and trying her best to act like she understands the struggles of America’s blue collar/middle class citizens, it turns out Ocasio-Cortez is just another out of touch politician who loves money.

A great example of this is the price tag on the recent outfit she wore as part of a photo shoot with, get this, a group of construction workers. Check this out.

In a photo shoot for Interview magazine, Ocasio-Cortez was pictured wearing a $3,500 outfit as she posed with construction workers.​ She was decked out in a Gabriela Hearst blazer ($1,990), Gabriela Hearst pants ($890), and some Monolo Blahnik shoes ($625).

“I’ve never met a socialist who had the faintest idea of redistributing a penny of their own money. They’re all about taking all the time,” said one Redittor.

“As a barmaid she took all $500 of the tips after a holiday night at the bar, stiffing the waitresses with only $50,” said another. “She is only a socialist if she can take as much as she wants and leave the scraps for everyone else.”

Said yet another: “No, she’s a real socialist. This is what socialism is. You tell the people that they deserve more, and those stinky ‘rich’ people aren’t paying their fair share. Then you join the ranks of the elite, bu[y] expensive clothes, lake houses, Audis, etc., and you’re set. This is socialism. This is literally what it is.” 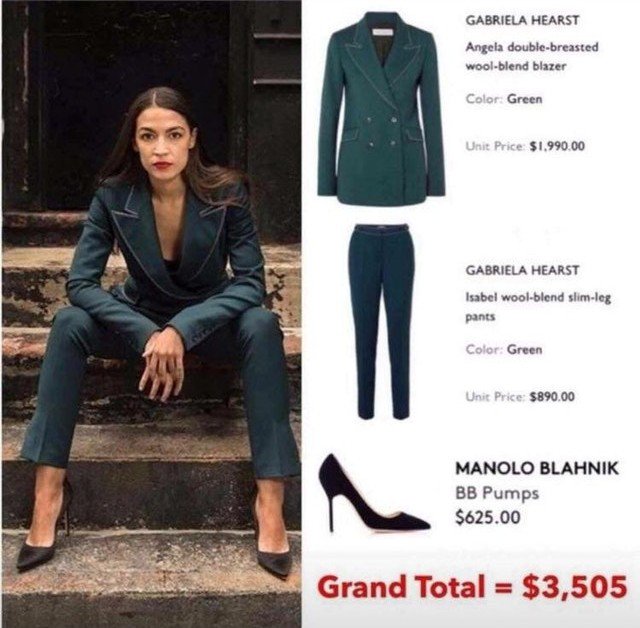 As it was so eloquently put by the Reddit users above, the vast majority of socialists only care about redistributing wealth after they’ve stuck their hand in the cookie jar for themselves.

And yet, many liberals in this country continue to think these kind of politicians have their best interest at heart. Sad.