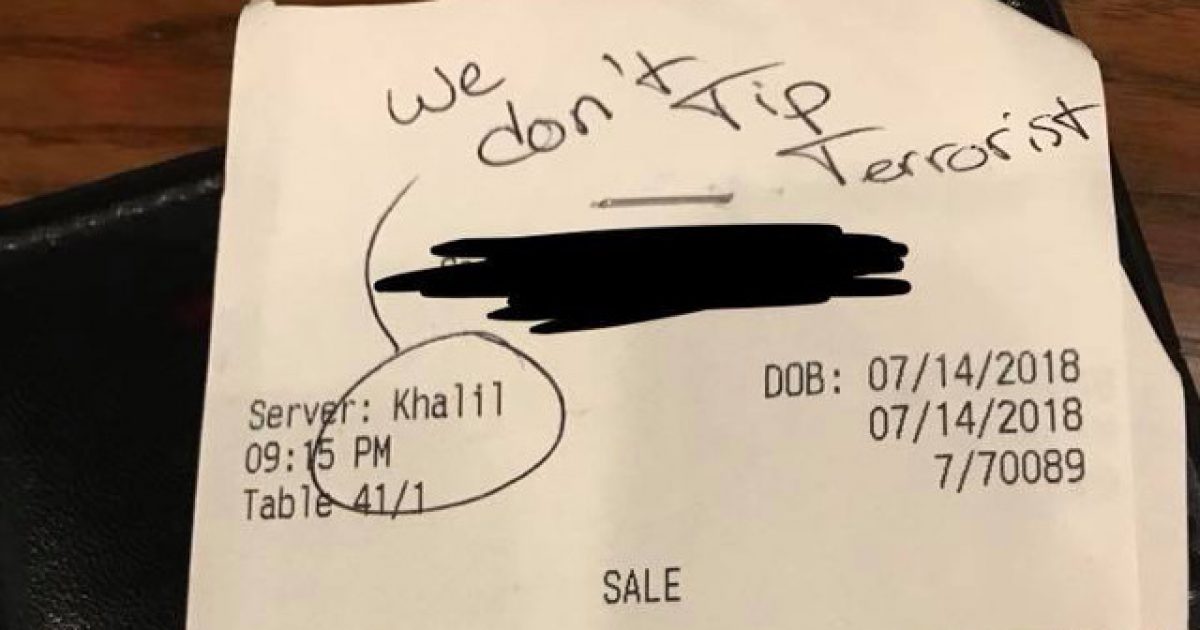 Khalil Cavil, a 20-year-old restaurant server at a restaurant in Odessa, Texas, recently spoke out about a bigoted message he received on one of his receipts. The message stated that he would not be receiving a tip from these specific customers because they “don’t tip terrorists.”

The customers in question racked up a $108.73 bill and then circled his name on the receipt, leaving the cruel and uncalled for message.

The kicker here is that Cavil isn’t even remotely a terrorist, nor is he a Muslim. He also has no middle eastern roots. To top it all off, he’s a Christian. These folks verbally insulted an American citizen solely based on his physical appearance.

Cavil told KPEJ-TV that his parents named him after a fallen military pal who was also named Khalil.

“My dad was in the military and a buddy that he was very close to, served with him … Khalil was killed in an accident and so my dad just named me after him, one of his best friends,” he said according to KPEJ.

“My heart just dropped, I didn’t know what to [say] or what to think in the moment but there’s hurt there,” Cavill said.

According to the Odessa American, Khalil means “friend” in Arabic.

On Sunday, Cavil shared a photo of the receipt on his Facebook page.

He captioned the snap, “Last night at work I received this note from one of my tables. At the moment I didn’t know what to think nor what to say, I was sick to my stomach.”

“I share this because I want people to understand that this racism, and this hatred still exists,” Cavil added. “Although, this is nothing new, it is still something that will test your faith. All day I’ve had to remind myself that Jesus died for these people too. I have decided to let this encourage me, and fuel me to change the world the only way I know how.”

He concluded, “So to all the haters out there, keep [talking], [you’re] only helping me step into my destiny!”

In response to the hateful comment, the restaurant has banned the customers who left the note from ever being allowed to eat there in the future.

This comment was totally uncalled for and is an egregious example of legitimate racism that still exists in our world. While many folks who scream that everything is racist are typically out of their gourd and engaging in political melodrama, this man has legitimately experienced racism’s ugliness.

Let’s hope those individuals responsible are so embarrassed by this that they repent of their sin, turn to Jesus, and stop acting like a bunch of fools.

WATCH: Did This CNN Analyst Just Call for a Coup Against Trump?