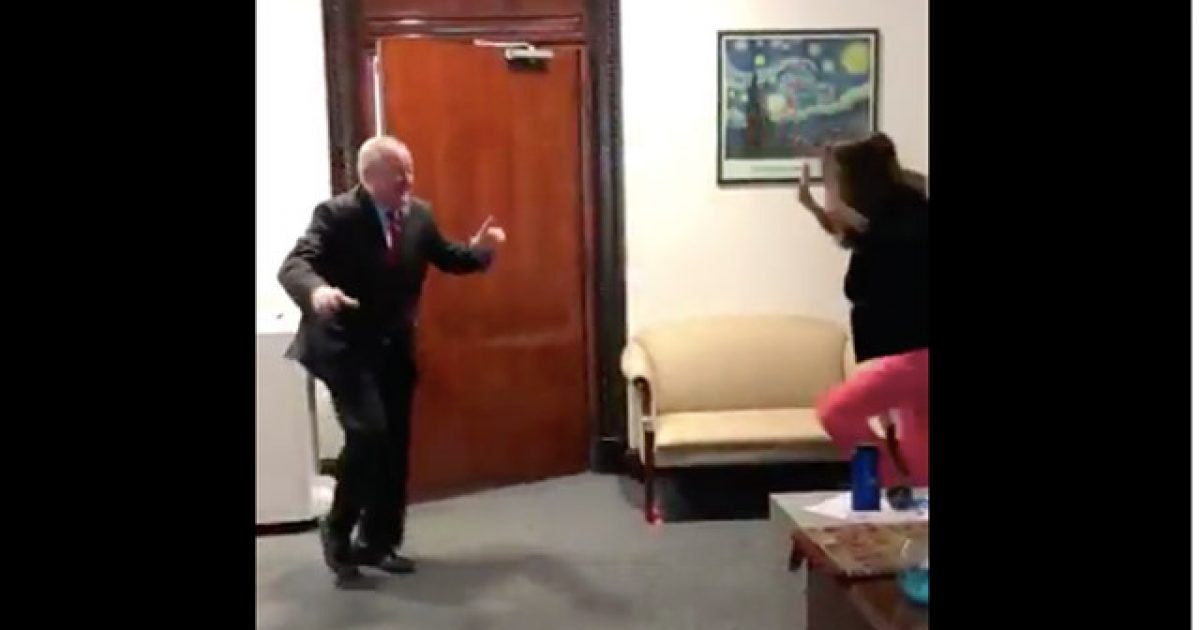 Philadelphia Mayor Jim Kenney was simply tickled pink with the ruling that Philly would now be called a sanctuary city, so thrilled was he that he broke out into a ridiculous looking happy dance that was caught on video.

Unfortunately for him, this video caught the attention of the Department of Justice who was not at all happy with his reaction, particularly since this ruling will help the city protect violent criminals who are in this country illegally, which essentially means that Kenney is helping to create more potential victims for these scumbags.

“Yesterday, the Mayor of the City of Philadelphia danced in jubilation over a court ruling that will allow him to continue to protect known and suspected criminal aliens in the City’s custody. These are individuals who have victimized the residents of the City he has sworn to protect,” DOJ spokesperson Devin O’Malley told The Daily Caller Thursday.

Needless to say, I think @janeslusser and @PhillyMayor are pretty excited about today’s ruling affirming Philadelphia as a Sanctuary City. pic.twitter.com/gdnnjZT9ps

“These are individuals like the violent criminal alien who was arrested in Philadelphia last year for forcing his girlfriend into a hot oven but was never turned over to immigration authorities,” O’Malley added. “The video is a sad and disturbing reminder that politicians like Mayor Kenney prioritize political gain over the law-abiding residents of their own cities and the safety of the law enforcement officers that try to protect them. The Department of Justice will continue to fight for the rule of law, and for the law abiding citizens of Philadelphia who fear victimization and reject the notion of protecting criminals.”

“This is an important moment for all Philadelphians, especially our immigrant community,” the mayor’s statement about the ruling read. “Judge Baylson’s ruling is a total and complete victory for the City. It prevents a White House run by a bully from bullying Philadelphia into changing its policies. It is a ruling that should make clear to Attorney General Sessions that federal grant dollars cannot be used for a political shakedown. It is, most of all, a ruling that reminds everyone of why this City and this country exist– to give safe haven, and hope, to those who flee tyranny, oppression and poverty in other parts of the world–to be a welcoming nation.”

It’s horrific to see a mayor, a man who is supposed to be a leader who stands up for the rights of his people, celebrating a measure that will inevitably create victims of violent crime on the streets he’s supposed to help protect. What makes it even more despicable is that he seems to care very little for backing and supporting the laws of the land, the very laws passed by Congress, created by legislators that were elected to their offices by the will of the people.

Shameful to the max.