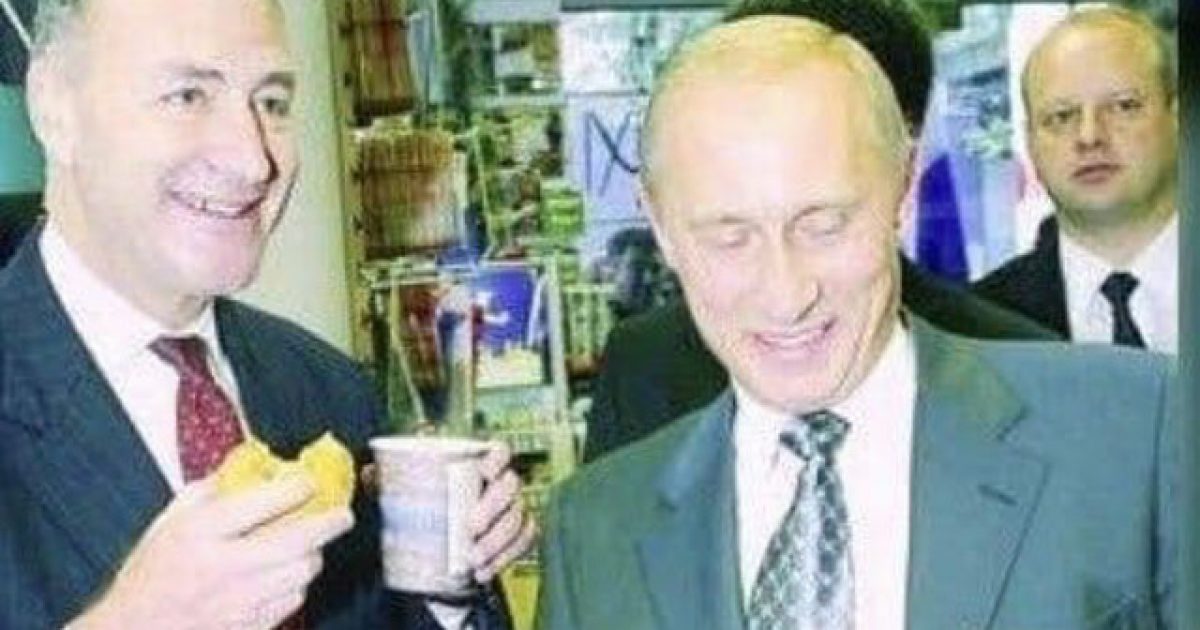 Sen. Chuck Schumer was one of the Democrats in Congress who had a nuclear meltdown after President Trump held his recent press conference with Russian President Vladimir Putin, delivering a little huff and puff on the Senate floor on Tuesday.

Well, as it turns out, there’s a photo of Schumer getting chummy with Putin over some tasty breakfast treats that’s now going viral on the Internet, serving to undermine his faux indignation against Trump.

“I’m from Brooklyn,” the New York Democart said on the Senate floor on Tuesday. “We learned one thing there, if we learned anything: when there’s a bully around, as Putin is, you show strength. But President Trump showed abject weakness. You know what that means? The bully will continue to take advantage of him. If President Trump was such an easy mark in Helsinki, President Putin will realize he’s an easy mark elsewhere.”

The two met in New York City in 2003, with Schumer welcoming the leader as Russian oil company Lukoil opened a gas station in Manhattan, NTK reports.

“When I showed the president of Russia a Krispy Kreme doughnut and he ate it and said it was good, that was one of the more surreal moments I’ve had in politics.”

In 2008, Schumer buddied up with Putin, writing in an op-ed for The Wall Street Journal — headlined “Russia Can Be Part of the Answer on Iran​” — that Putin could help in negotiations.

The Deep State claims Putin has bought Trump and I bet it cost a bundle. However, it appears that he picked up Chuck Schumer for a cup of coffee and a doughnut. ????

Some people HATE the fact that I got along well with President Putin of Russia. They would rather go to war than see this. It’s called Trump Derangement Syndrome!

The hypocrisy of the left has now been put on full display in so many different, unique, and creative ways it’s impossible not to take notice of it. Doesn’t saying one thing and doing another sort of turn off prospects from joining your party or causes?

That’s true for the vast majority of people, however Democrats tend to draw out their own, so folks who are already inconsistent in their beliefs flock to the party, joy filling their blackened hearts.

If Schumer truly has a problem with Putin and with Trump’s association with him, he needs to take some time to address this photo and the other connections he personally has to him if he has any hope of being taken seriously.

Elizabeth Warren Once Claimed She Was Native American, Her Newest Claim About Her History is Even Stranger