Liberals across the country are doing their part to fan the flames of fake outrage as the Kavanaugh FBI report hits the Senate Judiciary Committee today, and so far, it’s being said by leadership that nothing new has been produced.

This means that a confirmation vote is rapidly approaching, which translates into even more rage from progressives who were hoping to capitalize on the sexual assault allegations — which are unsubstantiated — to help them delay the vote and not allow Kavanaugh to be confirmed until after the midterm elections.

Well, it turns out, one such blood thirsty liberal organization who is already preparing for battle is Planned Parenthood. The group stands to lose a whole lot by the nomination of Kavanaugh who could potentially help sway the court on Roe v. Wade and turn abortion into a state issue. They don’t want this because, well, there goes their primary business.

In light of the threat to their livelihood that exists, Planned Parenthood recently tweeted out a threat to the GOP.

In a truly chilling Tweet, Planned Parenthood Action seemed to indicate they’re expanding their victim base to the already-born. 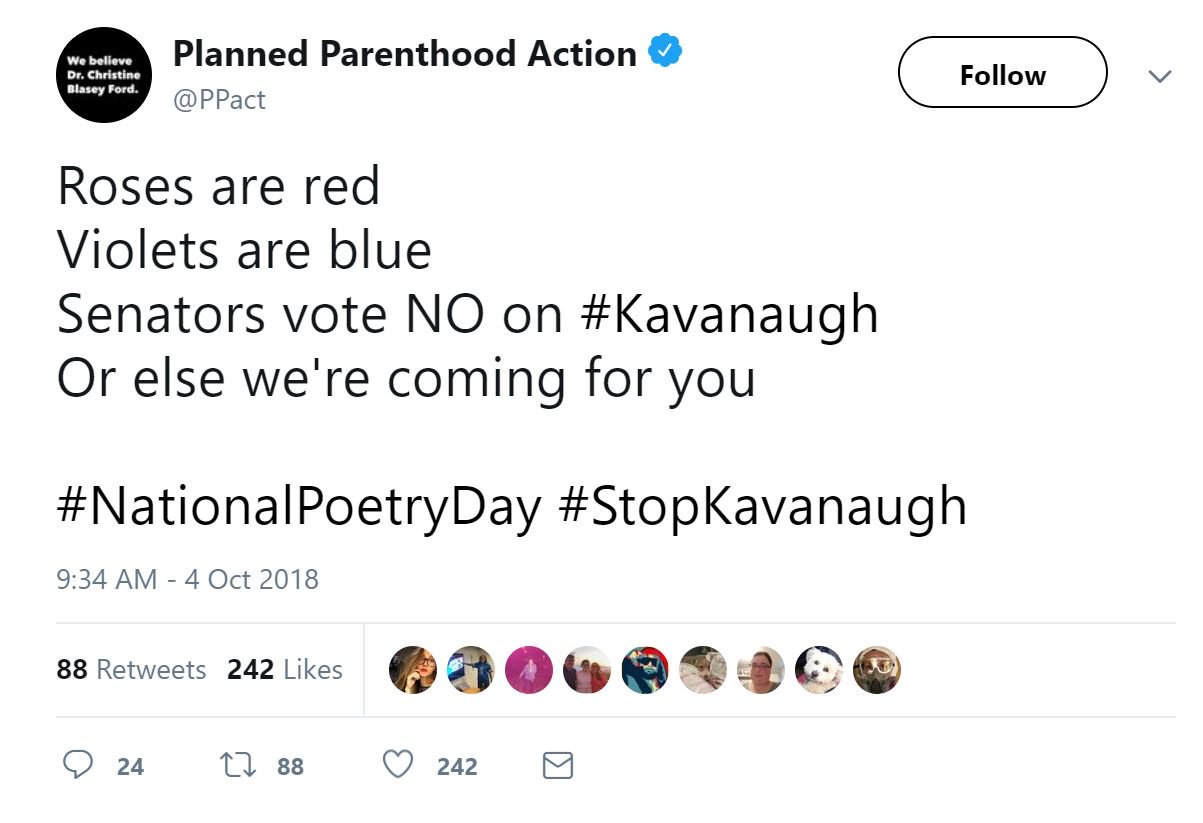 Planned Parenthood has spent nearly a million dollars in a campaign to “#StopKavanaugh,” under the premise that Kavanaugh represents the fifth Supreme Court vote needed to overturn the landmark abortion ruling, Roe v. Wade. In his initial confirmation hearings, Kavanaugh wasn’t very clear on the subject of abortion jurisprudence — deliberately, of course, since any indication of his intent to rule one way or the other could get him disqualified from sitting on the case — but Planned Parenthood took decisive action anyway.

So apparently they not only want to keep murdering the unborn, but they want to expand their services into the living. Or that’s the way they’ve made it sound in the tweet above.

It’s rather ominous and uncalled for, wouldn’t you agree?

At the end of the day, Planned Parenthood’s business is killing, and business is good. What’s hilarious is that there’s not likely going to be any significant change on this particular issue, yet here they are, overreacting as usual.

It’s all about the money. Killing babies and selling their organs has become a lucrative enterprise for Planned Parenthood, so they naturally want to remove all things that could stand in the way of their business practices.