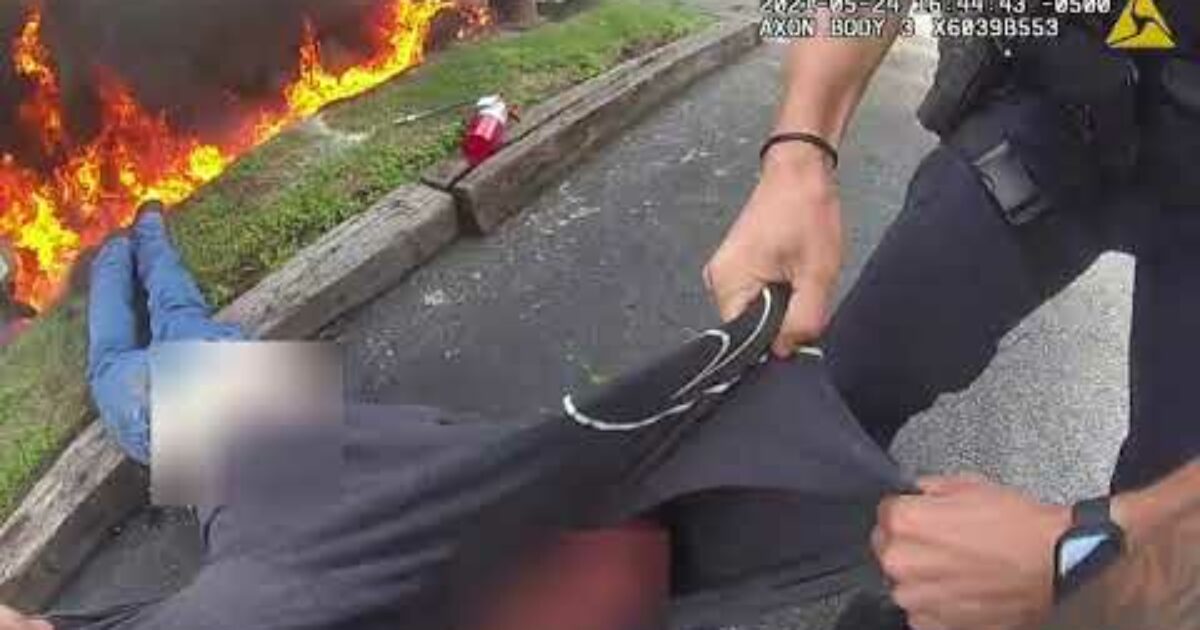 On May 24 in south Austin, Texas, a freak accident took place that quickly turned a truck into a fireball.

It was around 4:40 p.m. when first responders arrived to the Enclave apartment complex, and officers Eddie Pineda and Chandler Carrera were first on the scene.

Without that person, the officers might never have known someone was trapped inside until it was far too late.

“Yesterday afternoon, several of our B-shift crews were called to The Enclave apartments in south Austin for a car fire that resulted when the driver suffered a medical emergency at that same time he had just finished backing into a parking spot,” the Austin Fire Department posted on Facebook on May 25.

And in case you were wondering, this is all that’s left of that truck after the fire yesterday…

“His foot was still on the accelerator and he was unable to move it, causing the tires to spin continually in place, starting the blaze.”

Pineda was first to approach the truck, and body camera footage later released showed him breaking open the window and the smoke parting momentarily to show a man’s arm and leg.

When Carrera arrived, the two officers managed to drag the man out and away from the truck, and one of the officers commented that the man was having a seizure.

Shortly after the officers got the man out of the fiery vehicle, the truck exploded.

“I was just chilling inside and I heard a loud bang, kind of like when the [trash truck] comes and slams the dumpster onto the ground when they’re done emptying it or a transformer [exploding],” Tony Farmer, 36, who lives in a house nearby, told the Statesman. “Then the second time it happened, I was like, ‘Woah, that’s a little weird.'”

“It exploded a little bit, almost like in the movies, not like a huge explosion like atomic, but it engulfed more about 20 seconds after [the man] was removed from the vehicle.”

The man who had been trapped in the vehicle has not been named, and no update on his condition has been made publicly known other than what the fire department shared — that the man “was subsequently transported to the hospital by Austin-Travis County Emergency Medical Services with serious, potentially life-threatening smoke inhalation injuries.”

The two policemen have since been recognized for their heroics, and the day after the incident each received a special award.

Officers Pineda and Carrera received a chief’s coin of recognition for their heroic actions yesterday, in saving a man’s life from the vehicle fire. Please join me in recognizing these two for their quick-thinking and bravery! #OneAustinSaferTogether pic.twitter.com/8RntWzlPxi

“Officers Pineda and Carrera received a chief’s coin of recognition for their heroic actions yesterday, in saving a man’s life from the vehicle fire,” Assistant Chief Robin Henderson tweeted on May 25. “Please join me in recognizing these two for their quick-thinking and bravery!”

If you ask Pineda, though, he was just doing what he’d signed up for.

I’d also like to recognize Officers Eduardo Pineda and Chandler Carrera, for rescuing a man from a burning vehicle! Great work, everyone. #OneAustinSaferTogether pic.twitter.com/AeJytwiQys

“We just kind of showed up, saw what was going on and then just reacted based on our training,” he said.

“It feels good, but we don’t consider ourselves heroes. We’re police officers. That’s the job. We’re here to help people.”