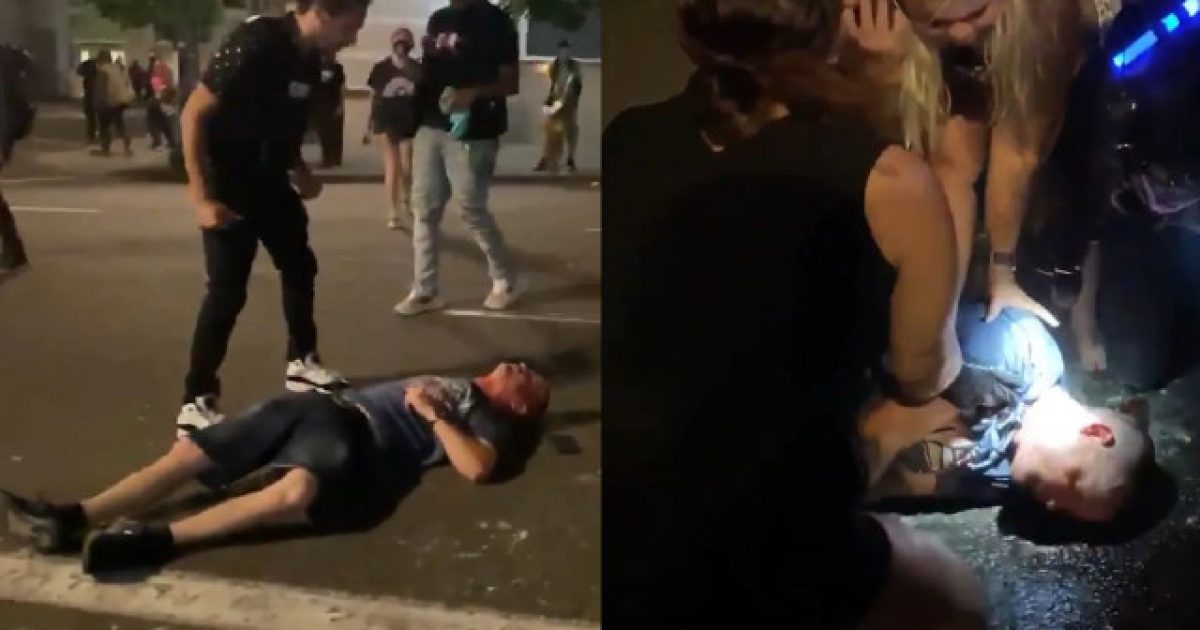 From the very beginning of the chaos that erupted in the wake of the death of George Floyd, the mainstream media has told us these are just “peaceful protests,” something they’ve attempted to do with straight faces as people burn buildings to the ground behind them.

These are anything but peaceful protests, and the latest footage of violent rioters coming out of the city of Portland should all but dispel the narrative being spoon fed to people by liberal news organizations.

Rioters allegedly beat a man on the streets of Portland so severely that he was transported to the hospital with “serious injuries.”

Violent rioters allegedly beat a man in Portland last night, kicking and punching him in the head, after he reportedly defended someone that had been attacked.

The man then appeared to attempt to flee the situation in his truck and later ended up crashing into a building, at which point he was violently attacked by what independent journalists have identified as Antifa and Black Lives Matter activists. During the attack he was kicked in the head from behind, which instantly knocked him out. Some of the witnesses attempted to move him.

The man was kicked and knocked unconscious in the street. #antifa medics arrive to help. pic.twitter.com/JuBmSShAyC

A crowd is gathered around the unconscious victim’s body; some are pouring water on his head. Others can be heard arguing and establishing BLM responsibility for the attack. pic.twitter.com/I6GUIYkTtZ

TONIGHT: Here is what took place before the man crashed his car into a tree here in Downtown Portland

He then began to drive away to evade them pic.twitter.com/5oPev8Fiar

Here are the moments shortly after the man crashes due to BLM harassment and before they knock him out in Portland pic.twitter.com/JcrJ5w3ty8

“At 10:27p.m., Central Precinct officers responded to a report of an injury accident at Southwest Broadway and Southwest Taylor Street,” The Portland Police Department said in a statement. “The report said protesters were chasing the truck before it crashed, and they assaulted the driver after the crash.”

“Officers encounters a hostile crowd and a squad from the Rapid Response Team (RRT) responded to help secure the scene while the investigation was underway,” the statement added. “The driver was transported to the hospital by ambulance with serious injuries. The incident is under investigation and no arrests have been made.”

The saddest part of all of this is how politicized these kind of acts of violence have become. Radical leftists in positions of leadership, in partnership with the mainstream media, refuse to give these sorts of attacks the attention they deserve because they do not fit the narrative they are attempting to push.

What they want more than anything is to use these riots, which they call “protests” as a weapon against President Trump. This has liberal leadership, who already lack a back bone, terrified to even consider taking the right kind of action to bring law and order back to the streets of their cities.

If they bring in police, they will be labeled racist and fascist. They will lose reelection. And to them, this is worse than allowing hoodlums to destroy businesses, homes, and entire communities.

Leaders in Portland need to get their priorities straight and demonstrated they care for the folks in their city by bringing this chaos to order.

ICYMI: Kamala Refers to ‘Looters, Arsonists & Cop Killers’ As A ‘Coalition of Conscience’