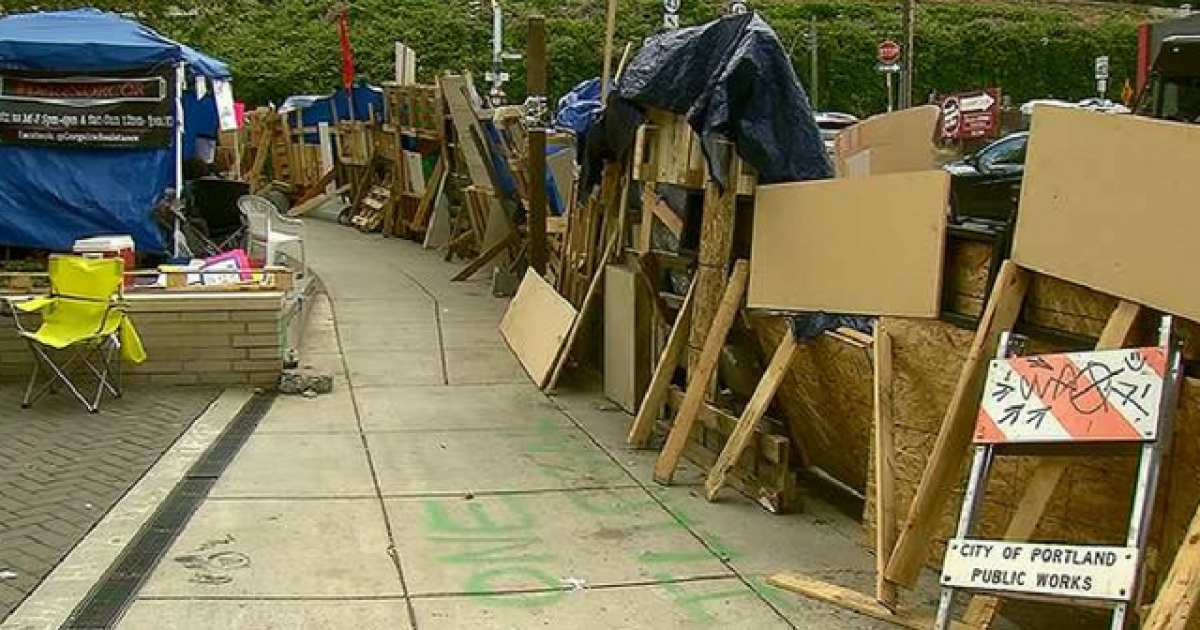 You know what they say…if the left didn’t have double-standards, they’d have no standards at all.

A group of far-left pro-illegal immigration activists (you never thought that’d be a mainstream thing, did you?) who had been camped out in Portland as part of the Occupy ICE protests were recently finally cleared away by police and city workers, but not before they attempted to create their own strictly enforced “borders” around their urine-and-garbage scented encampments.

That’s right–walls are racists if you’re trying to enforce the border of a sovereign nation, but if you’re just trying to protect your little hippie camp from the policemen trying to evict you and avoid a massive public safety (not to mention public health) issue, then they’re totally OK.

On Wednesday, The Daily Wire reported that “Occupy ICE” protesters in Portland had been given eviction notices and were ordered to pack up their belongings and demonstrate against vague notions of tyranny and oppression elsewhere.

But while some indeed cleared out (in a manner of speaking, at least), others decided to stay and fight, erecting — ironically — a “border wall” to enclose the Occupy ICE PDX encampment and stationing “border guards” around their tiny independent nation.

No, really. The border wall, which is in fact quite high (perhaps, say, to prevent border jumpers), went up over the weekend.

Here it is, in all its glory:

Unfortunately for Occupy ICE and fortunately for the citizens of Portland, the camp, along with it’s wall, was bulldozed within a few days of erecting their wall:

Occupy ICE PDX posted vid this morning of moment police finally entered the camp. “This is what happens when a fascist empire fucking sees people create something beautiful… they have to destroy it.” pic.twitter.com/MPuPoH8bg7

After 6 weeks, the “abolish/occupy ICE” Portland camp is no more. Starting early this morning, dozens of cleaners quickly emptied most of the fortress. The strong smell of dried urine permeates the air. There is junk all around the former camp. pic.twitter.com/xoRctNif4g

Now, when can we get our own big, beautiful wall?