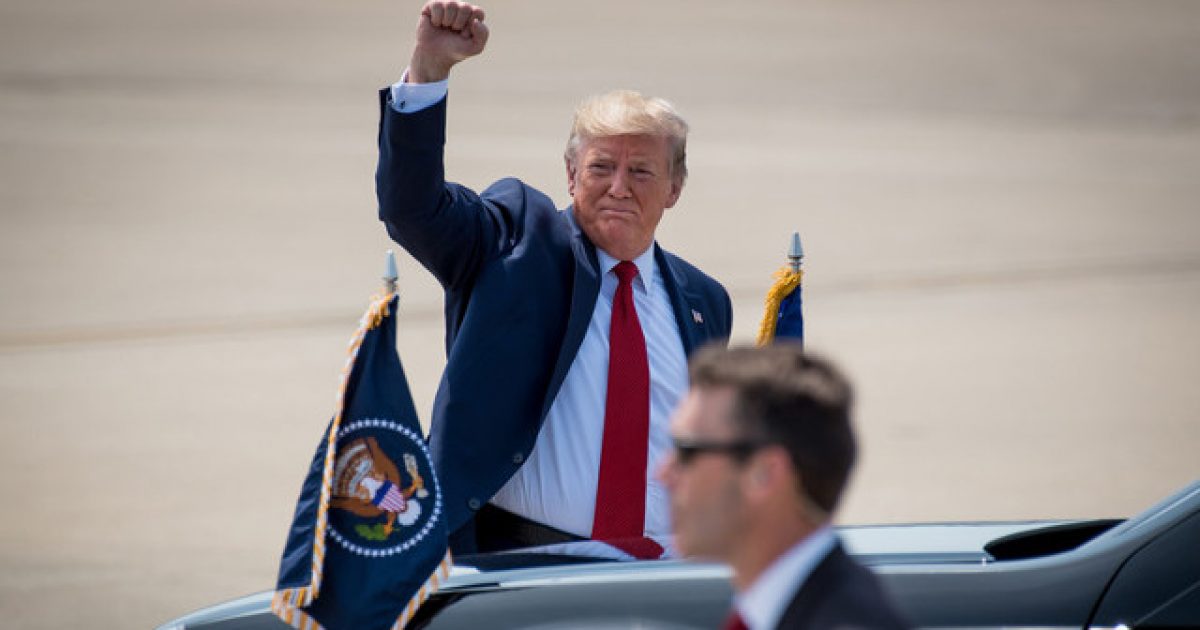 President Trump took to Twitter on Monday morning to launch a full scale attack against Rep. Adam Schiff, going so far as to suggest that he should possibly be arrested for treason.

All of this, of course, is related to the latest scandal involving Trump calling the president of the Ukraine and suggesting the country investigate a matter involving former Vice President Joe Biden, who is running for president, and his son Hunter.

“Rep. Adam Schiff illegally made up a FAKE & terrible statement, pretended it to be mine as the most important part of my call to the Ukrainian President, and read it aloud to Congress and the American people. It bore NO relationship to what I said on the call. Arrest for Treason?” Trump wrote.

Rep. Adam Schiff illegally made up a FAKE & terrible statement, pretended it to be mine as the most important part of my call to the Ukrainian President, and read it aloud to Congress and the American people. It bore NO relationship to what I said on the call. Arrest for Treason?

Schiff, who serves as chairman of the House Permanent Select Committee on Intelligence, led a hearing last week that featured testimony from acting Director of National Intelligence Joseph Maguire. Midway through his opening statement, the California Democrat delivered what he said was a summation of what transpired in a July 25 phone call between President Trump and Ukraine President Volodymyr Zelensky.

“What happened on the call?” the Califronia Democrat said. “Zelensky begins by ingratiating himself, and he tries to enlist the support of the president. He expresses his interest in meeting the president and says his country wants to acquire more weapons to defend itself. And what is the president’s response? Well, it reads like a classic organized crime shakedown. Shorn of its rambling character and in not so many words, this is the essence of what the president communicates.”

After this, Schiff then “quoted” the president, saying the following:

“This is in sum and character what the president was trying to communicate with the president of Ukraine. It would be funny if it wasn’t such a graphic betrayal of the president’s oath of office.”

Rep. Andy Biggs, a member of the GOP, stated that Schiff should be punished for claiming Trump said things that he didn’t actually say, calling attention to how impeachment is a serious matter that should not be taken lightly.

Briggs said, “It is therefore inexcusable to toy with the process and mislead the American pubic with such a statement.”

Biggs is asking the House to censure Schiff. Here’s a snippet of his resolution:

“Whereas, instead of quoting directly from the available transcript, Chairman Schiff manufactured a false retelling of the conversation between President Trump and President Zelensky; Whereas, this egregiously false and fabricated retelling had no relationship to the call itself; Whereas, these actions of Chairman Schiff misled the American people, bring disrepute upon the House of Representatives, and make a mockery of the impeachment process, one of this chamber’s most solemn constitutional duties.”

Trump tweeted the following on Sunday, “Like every American, I deserve to meet my accuser, especially when this accuser, the so-called ‘Whistleblower,’ represented a perfect conversation with a foreign leader in a totally inaccurate and fraudulent way. Then Schiff made up what I actually said by lying to Congress …”