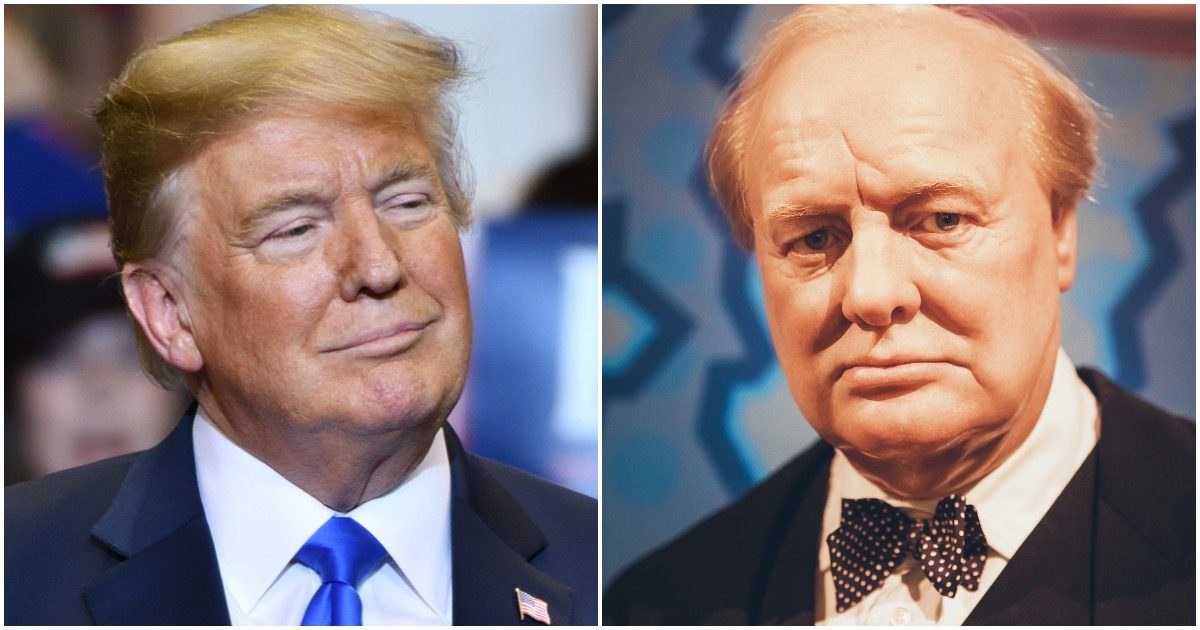 Winston Churchill stands out as the most extraordinary politician of the 20th century. The Second World War was the catalyst for his success. Without it, Churchill probably would have faded into oblivion. In the 1930s, Churchill was vilified by the British political establishment when he warned about the threat posed by Nazi Germany. They thought he was nuts. Until 1940, that is. It turned out that not only was he right about Hitler, he was uniquely qualified to inspire, cajole, and lead the British people plus nurture the critical Anglo-American alliance. What would we have done without him?

The contemporary American version of Churchill is Donald J. Trump and the catalyst for his success was Barack Obama. Without Obama, Trump would still be negotiating hotel deals in New York City. Obama’s unabashed hatred of the United States manifested itself in a total rejection of American values: he wanted to sacrifice individual rights on the altar of governmental power, restrict free speech, replace meritocracy with identity politics, and suspend due process and the rule of law. Obama’s eight-year war on our treasured values produced an unexpected result—Donald Trump.

Trump has done a lot in three years, but his most important contribution has been the reversal of Obama’s legion of subversive regulations. Obama was stifling American business initiative and annulling our personal freedoms by the boat load. The Donald was the right man to change all that. Victor Davis Hanson explains the Trump dynamic in The Case for Trump. Trump, says Hanson, is the classic “tragic figure,” e.g., Achilles in The Iliad, General George Patton, the Gary Cooper character in High Noon, and the John Wayne character in The Searchers. Each of them is a dangerous, unlikeable loner who solves a critical problem in a way that no one else can, often by violence. Once the job is done, society can no longer tolerate him. General Patton was the right man during the war, but afterward there was no place for him. Churchill fits the pattern. He was the right man to lead England to victory but was repudiated by the voters once the war was over. Trump the outsider has many unpleasant traits but he is the only one who can deal effectively with the excesses of the Deep State and the mess left by eight years of Obama. After 2024, we can put him out to pasture, but for now Trump is the man of the hour.

As with Churchill, most of the anti-Trump criticism is personal. Churchill was attacked because he drank too much. Trump is attacked because he is brash. He tends to be too candid about his views. He tweets too much. He reacts personally to attacks. He has a bad haircut. Aside from the haircut, I like them all. What I care about in the 2020 election is what Trump has set out to accomplish:

1. Positive economic growth, security policies that protect the homeland, and sensible fiscal management.
2. Safeguarding the republic from an assault on the Bill of Rights.

Bernie Sanders and his Democratic Party colleagues would move us in the direction of totalitarianism. They want to finish what Obama started. Sanders wants to substitute Trump’s successful policies with runaway expansion of the federal government, open borders, the replacement of free speech with political correctness, and a menu of extravagant giveaways that he has no earthly idea how to pay for. Bernie’s love affair with socialism will turn the nation into Venezuela. We will be eating out of the garbage and wiping our butts with the New York Times. In other words, the Democrats are a guarantee of disaster.

Whenever you have big government, you have a corresponding decrease in personal freedom. Under a Bernie Sanders presidency, freedom of speech will be one step away from annihilation. He will appoint to the Supreme Court a series of “progressive” justices who can be counted on to ratify the Democratic Party’s assault on the First Amendment. As Bernie taxes us out of existence, he will prohibit hate speech. Once freedom of speech goes, that is the end. We may never get it back. Without freedom of speech, we have no rights, no liberties, no freedoms. The pattern is already being established in Europe thanks to the European Union’s assault on free speech. We can’t allow it to happen here. George Orwell’s prediction in his novel, 1984, will have been realized—Big Brother will tell us what to think.

But just as British voters had the brains to see beyond Neville Chamberlain, let’s hope that American voters will have the brains to see through Bernie Sanders. We should be grateful that we have our own home-grown Churchill. Let’s allow Mr. Trump to do what he came for.