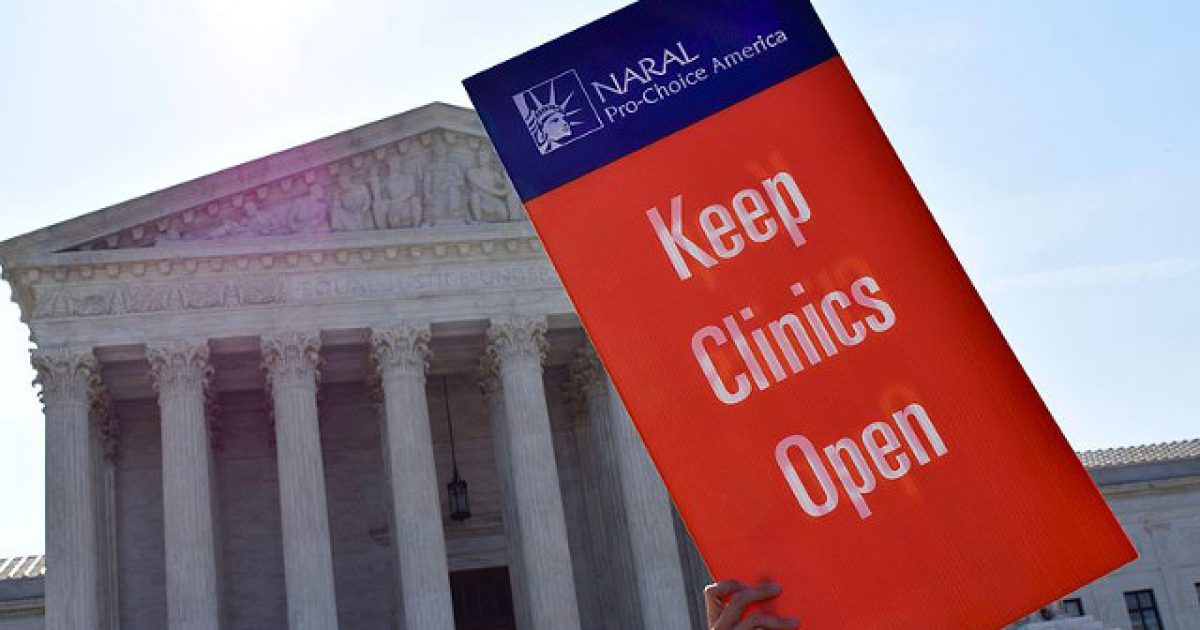 One of the worst scourges on America as a nation is the holocaust of abortion that has left millions of pre-born babies slaughtered mercilessly since the Supreme Court decision of Roe v. Wade.

If you’re ever curious to know why it seems our country is under such fierce judgment, why so much seems to be going wrong for us culturally speaking, at the root of it is the fact we have abandoned God’s righteous standards, which were the basis of American law, and openly promote the idolatrous murder of our children at the altar of convenience.

This reality is what makes a pro-abortion group like NARAL so absolutely despicable, as they often not only promote, but celebrate this act of murder with utter glee and zest.

In a tweet that can only be described as “tone deaf” this baby killing organization actually attempted to celebrate Father’s Day this past weekend.

Fortunately, folks on Twitter did not let these hacks get away with such an egregious insult to human decency.

Hey dads, Happy #FathersDay! Caring about women’s #reprofreedom & bodily autonomy makes you better at raising future generations of feminists. So if you’re a pro-choice dad & one of the many #MenForChoice, we’re celebrating you today! pic.twitter.com/hsC9I92317

NARAL’s history of haostility toward babies in the womb is legendary; as The Daily Wire reported in December 2016, “Kate Michelman, NARAL’s president from 1985-2004, fought aggressively against George W. Bush’s Partial-Birth Abortion Ban Act of 2003, saying, “George Bush has crossed a line, and we are going to be working hard to make sure every member of America’s pro-choice majority understands the significance.”

The abortionist pulls a living baby feet-first out of the womb and into the birth canal (vagina), except for the head, which the abortionist purposely keeps lodged just inside the cervix (the opening to the womb). The abortionist punctures the base of the baby’s skull with a surgical instrument, such as a long surgical scissors or a pointed hollow metal tube called a trochar. He then inserts a catheter (tube) into the wound, and removes the baby’s brain with a powerful suction machine. This causes the skull to collapse, after which the abortionist completes the delivery of the now-dead baby.

In February 2016, NARAL railed against a Doritos Super Bowl ad which featured an ultrasound image of an unborn child in the ninth month of pregnancy. NARAL tweeted that Doritos was “humanizing fetuses.”

Check out these responses to the Father’s Day tweet:

There are MILLIONS of fathers who are mourning the loss of their children today because of you sick people. #FathersDay https://t.co/asqStOrBn6

How do these people sleep at night? https://t.co/TylCbIN2kl

On this #FathersDay,National Abortion Rights Action League-NARAL is asking men why they are proud to support abortion/the killing of their unborn babies. Hey #MenForChoice,abortion has led to millions of lost fatherhood. Real men should never support the killing of their children https://t.co/EJl4yh9LHA

This is sick. Thinking today of all the would-be dads mourning their unborn children sacrificed at the altar of "choice." https://t.co/m91VNk802W

The words do not exist in the English language to describe how disgusting and morally bankrupt NARAL is for pushing this tweet out there.

Abortion is a great and wicked evil. In fact, it is the civil rights issue of our modern era. It’s a crime against humanity, society, and God Himself. It’s something that should be made illegal and those involved in its practice punished accordingly.

How can a nation ever hope to preserve it’s liberty if it willingly strips its most vulnerable citizens of their most basic right: the right to life?

The short answer is, we can’t. God will not allow it. If we really want to restore this country, we should start with valuing life instead of celebrating a culture of death.

Carjacker Shoots Man in Walmart Parking Lot, What Happened Next Has People Calling This Citizen a Hero