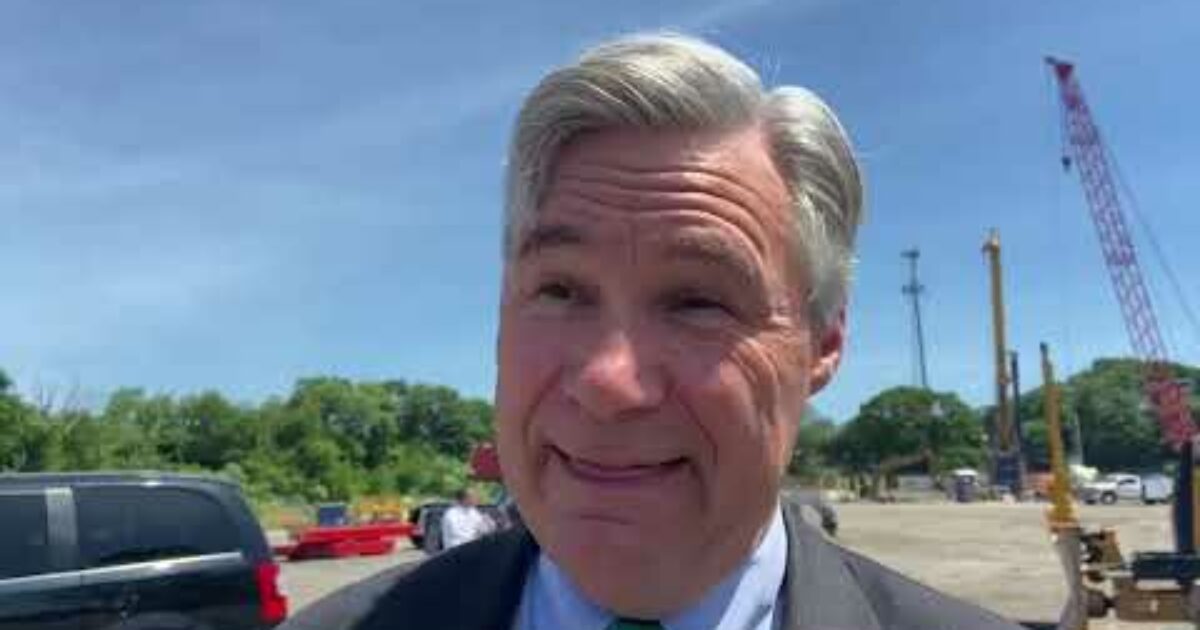 When it comes to progressive politics, Sen. Sheldon Whitehouse has a lot to say.

The Rhode Island Democrat is more than willing to mouth off on “climate change.” He’s not afraid to threaten the United States Supreme Court.  He’s got no problem preening about “racial injustice” and #BlackLivesMatter tags on Twitter.

But when the question is about his own membership in an exclusive, all-white beach club in his home state, he all but clams up.

As the local news outlet GoLocalProv reported over the weekend, Whitehouse has been part of Bailey’s Beach Club in Newport for decades, but he doesn’t have much of an explanation for how the club has remained as lily-white as his own name.

In a GoLocalProv interview Friday, Whitehouse was asked if his club had any minority members. The answer to that would be “no,” apparently. But Whitehouse had a reason.

“I think the people who are running the place are still working on that,” he said. “I’m sorry it hasn’t happened yet.”

It’s a good bet the senator was a lot sorrier that he was asked the question in the first place.

When the reporter followed up by asking Whitehouse if the club should “continue to exist” in an age when Democrats like himself are decrying the “systemic racism” that allegedly plagues the United States in the 21st century, the Whitehouse answer was so bland it made vanilla look bold.

“It’s a long tradition in Rhode Island and there are many of them and I think we just need to work our way through the issues, thank you,” he said.

It might be a nice change to hear a Democrat upholding the value of “tradition” – for a party that’s championed rioters tearing down statues of the giants of American history, respect for tradition is in pretty short supply.

(Columbus Day is a long tradition for instance, yet many Democrats don’t think much of it these days. The traditional “Merry Christmas” and Nativity scenes can cause liberal apoplexy. And marriage between one man and one woman — a granddaddy among traditions in Western civilization, is all but passe among the enlightened left.)

But the context only highlights how hypocritical Democrats like Whitehouse really are.

According to GoLocalProv, Whitehouse transferred his shares in the club to his wife, Sandra Thornton Whitehouse, years ago. She is now one of its largest shareholders, according to the outlet, which generally would mean that she – and by extension, he – is one of those “people who are running the place.”

But somehow this club hasn’t managed to find a non-white member yet.

The social media responses were scathing — and for Whitehouse, humiliating.

If the Democrats let Gov. Ralph “Blackface” Northam get away with his Klan costume picture they most certainly will let Sen. Sheldon Whitehouse get away with being a member of an all-white club in the year 2021. https://t.co/TZub2SCCTv

Sheldon “Boof Truther” Whitehouse has always been a clown. It’s no surprise that he’s also a hypocrite on race.

Why is Sheldon Whitehouse not trending?
Because he’s a Democrat. https://t.co/6n714HW2I0

And this one nails it.

“If Sheldon Whitehouse were a Republican, every newspaper in America would call on him to resign,” Ohio Republican state Rep. Brian Stewart wrote, “every Republican in America would be asked to denounce him & his racist affiliation, & every woke corporate PAC would announce they’re terminating all donations to him & his allies.”

If Sheldon Whitehouse were a Republican, every newspaper in America would call on him to resign, every Republican in America would be asked to denounce him & his racist affiliation, & every woke corporate PAC would announce they’re terminating all donations to him & his allies. https://t.co/2XorvZuzye

For the record, the Bailey’s Beach Club is really exclusive. As New York Times reporter Kenneth Vogel pointed out, his newspaper wrote up the club in 2003. The headline was “SUMMER PLACES; At Bailey’s Beach, The Ruling Class Keeps Its Guard Up.” (Noteworthy quote regarding membership: “Jewish yes. Blacks, not really.”)

And for the record, Whitehouse is really down with the racial justice movement. He was a co-sponsor of the bill to make Juneteenth a federal holiday, after all. (And that was last year. Before President Joe Biden apparently even knew what Juneteenth was.)

In May, he used the anniversary of George Floyd’s death to talk about “racial injustice,” with a very pointed tag for #BlackLivesMatter, just to let his Twitter followers know how pro-BLM he really is.

Today, we remember George Floyd. His tragic death one year ago sparked a global movement against racial injustice. We are working in Judiciary to bring lasting change. #BlackLivesMatter

Now, there could be perfectly acceptable reasons that Whitehouse’s club has no minority members. Maybe none is interested in joining, for instance. (Just the fact that Whitehouse and his ilk are members would be good enough for any sane person to not want to belong to it.)

But the point is that a Republican who is a prominent as Whitehouse would never get a pass on a matter like that.

The mainstream media will give Whitehouse all the attention he wants when it comes to pontificating about liberal issues such as “climate change.” He won’t be challenged while issuing threats to the Supreme Court to try to sway decisions on pet liberal issues like gun control.

He’s even allowed to preen about how the Senate Judiciary Committee he’s part of is working to bring about “lasting change” on racial matters.

In fact, Whitehouse seems to have a media soapbox to talk about just about any topic under the sun when it comes to pushing progressive politics.

But when it comes to a question about his own life, he doesn’t have much to say.

And the mainstream media has even less.

It’s hard to say whose hypocrisy is worse.

Invasive 'Alabama Jumpers' Can Reproduce Without a Mate, Lay 20 Worm Cocoons Each Month