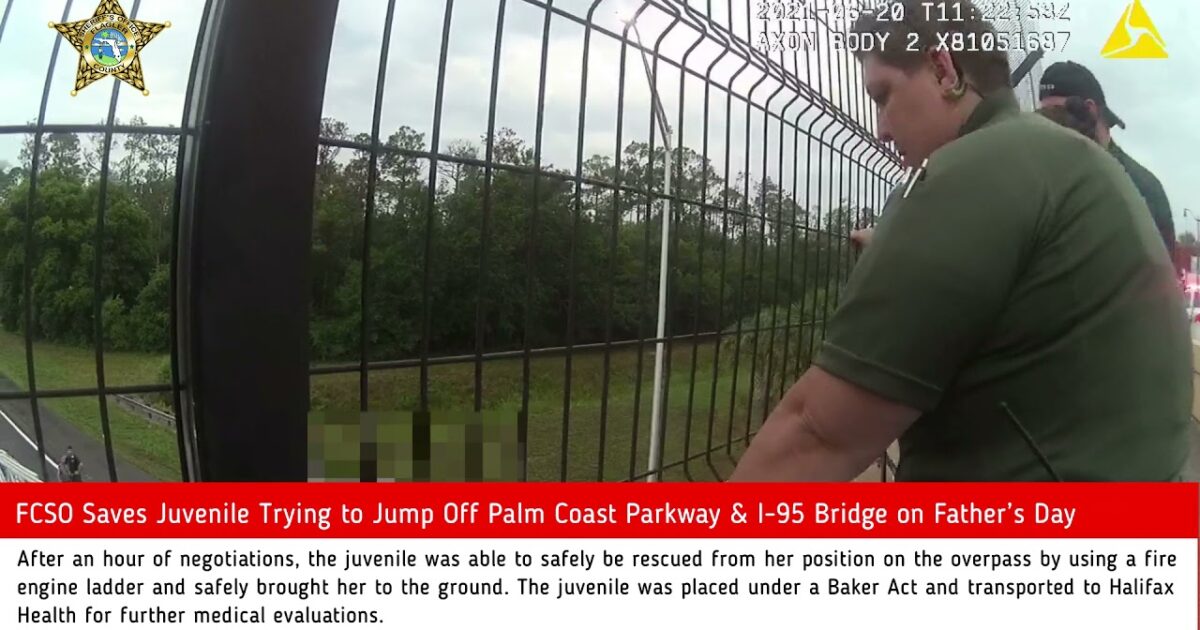 On Sunday, while many people were celebrating the fathers in their lives, one father in Palm Coast, Florida, was worried he might lose his daughter.

The 17-year-old, whose name has been kept private because of her age and the circumstances of her story, was reportedly threatening to hurt herself when her father called 911 around 6 a.m.

The father told the Flagler County Sheriff’s Office that at some point, she said “I can’t do this anymore” and took off running.

A short time later, sheriffs got a tip that the teen might be on the Palm Coast Parkway and I-95 overpass bridge.

They were also informed that the girl did not like males, so they sent a female sheriff, Deputy Laura Jenkins, to talk to her.

Sure enough, she was on the overpass, “slowly inching her way closer towards the highway,” according to the caption on the YouTube body camera video. As Jenkins approached the teen, trying to create a bond with her, the teen let go of the railing.

“FCSO Deputy Jenkins was negotiating with the juvenile, letting her know she’s there to help her, when the juvenile let go of the rail to jump,” the caption reads.

“Deputy Jenkins immediately grabbed her hand before she could fall and secured her to the rail with handcuffs.”

Jenkins and another female officer continued to talk to the girl. Meanwhile, the fire department and Deputy Crista Rainey were working to set up a fire truck with a ladder on the highway below so they could safely escort the teen to solid ground.

It took about an hour to get everything set up, but as Rainey drew closer, the teen repeated “go away” as the deputy worked to convince her to come down with her.

With the help of a firefighter, Rainey was able to secure the teen and they made it safely off the bridge. The girl has since been taken to Halifax Medical Center under a Baker Act.

Flagler County Sheriff Rick Staly recognized the teamwork across agencies as “outstanding,” making sure to mention each group and praise their skills.

“This is an outstanding rescue by all agencies involved,” Staly said. “The quick response and combined efforts of FCSO deputies, Crisis Negotiations, Communications Center, Fire Rescue, and the deputies holding the juvenile’s hand saved a life today.

“Their training in de-escalation techniques and being able to talk to someone who’s threatening to take their life is remarkable.

“I commend all the men and women who stepped up for this child’s life today. Someone’s daughter was saved on Father’s Day, and I hope she receives the help she needs.”