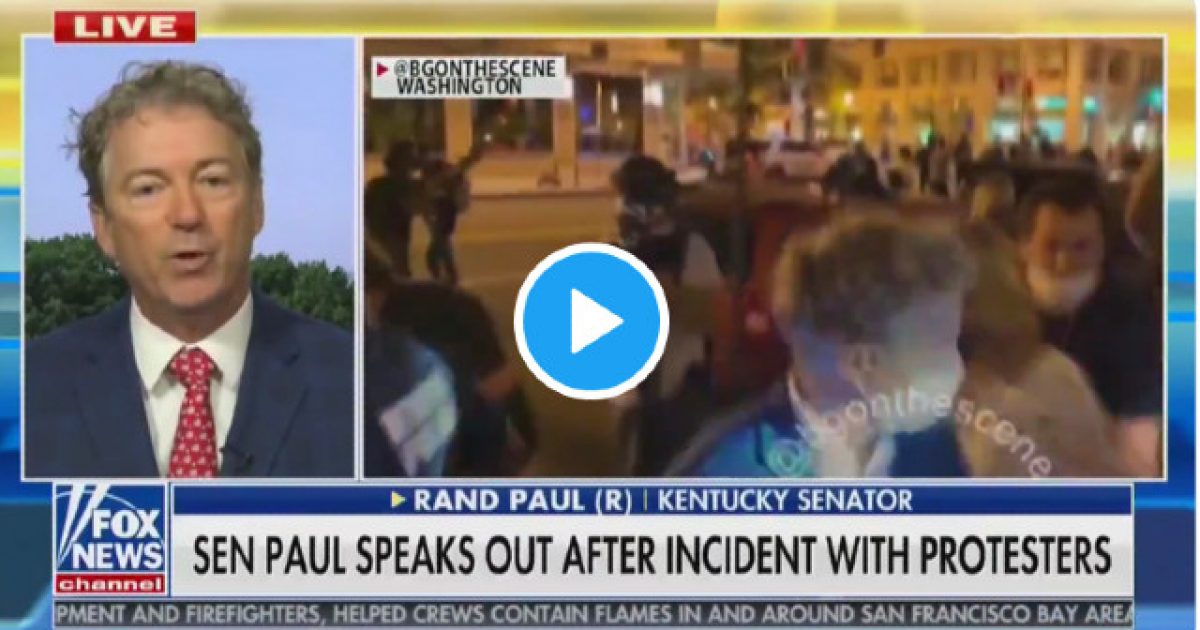 Sen. Rand Paul spoke with “Fox & Friends” Friday morning about his harrowing encounter with violent protesters who assaulted him and his wife after they left the Republican National Convention after the conclusion of President Trump’s acceptance speech.

Paul stated that he believed the mob that assaulted him Thursday night could have been part of a larger conspiracy of individuals involved with “interstate criminal traffic being pad for across state lines.”

He also stated that if not for the police protecting them, he believes they’d be dead.

“They were yelling threats. They were trying to push the police over to get to me,” Paul said. “They were grabbing at us, and it got worse and worse and worse, and then finally, we decided to make a move. I said we’ve got to move. If there’s not reinforcements, we have to try to get to the hotel which was another block and they were shouting threats to us, to kill us, to hurt us, but also threats, shouting ‘say her name, Breonna Taylor,’ and it’s like you couldn’t reason with this mob but I’m actually the author of the Breonna Taylor law to end no-knock raids.”

“So, the irony is lost on these idiots that they are trying to kill the person whose actually trying to get rid of no-knock raids and they were shouting and screaming and just, really these people were unhinged, but I can’t tell you how, I’m not sure we would have made it,” Paul continued. “So, as we’re walking sort of surrounded by the police, they’re attempting push the police over to get to me, so at one point they push a policeman backwards, he stumbles and he’s trying to catch his balance and I catch the back of his flak jacket to stabilize him to make sure he’s okay because he’s our defense. If he’s down the mob is loose on us, and you’ve seen the pictures of what they do to you.”

“If the police are not there, if you defund the police, if we become Portland, if America becomes Portland, what’s going to happen is people are going to be pummeled and kicked in the head and left senseless on the curb,” Paul continued. “That would have happened to us, I promise you, had we not had the D.C. Police to support us, we are thankful we have police, and we’ve got to wake up. We can’t have the whole country. We can’t have Joe Biden rule the country and have no police. I mean, we can’t walk down the street in D.C. safely now. That’s how bad it is.”

Sen. Paul later added, “we’re going to find out that these people are hired and from out of town, specifically in our case, I believe they are going to be people who are involved with the attack on us that actually were paid to come here, are not from Washington, D.C., and are sort of paid to be anarchists.”

“This is disturbing because really, if you’re inciting a riot, that’s a crime, but if you’re paying someone to insight a riot that person needs to go to jail as well, but we can’t live this way,” Paul said. “Its become so dangerous for us and I don’t hear Joe Biden or Kamala Harris saying one thing about the violence. This mob is their voters. This is the new Democrat Party, and if we don’t resist this, United States is going to become Portland. We’re going to become Chicago. All of these failed cities Democrats have run, the president said in his speech, if we allow them to take over the White House, we are going to become Portland, the country will be on fire, we have to have law and order and we have to support the police. I can’t say that strong enough.”

Sen. Rand Paul (R-KY) says he believes that those who attacked him last night were paid agitators from out of town and that they would have killed him and his wife if it wasn’t for the police pic.twitter.com/TdVmuuxk7m

We know that billionaire communist George Soros is big into paying folks to be agitators like this, so the fact they might have come from out of town and been paid to stir up trouble would not be surprising in the least.

However, let’s keep in mind the true depravity of humanity, the broken sin nature that we all possess. People are indeed capable of unspeakable acts of evil all on their own.

The question remains as to what we’re going to do about these mobs. This cannot be allowed to continue. It’s time to arrest these individuals. Send out military and police forces to quell the rioting. Stop defunding police and allow the cops to do their jobs.